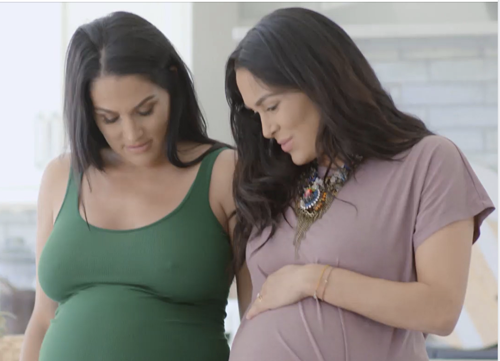 Tonight on E! their reality show Total Bellas featuring WWE superstars, Nikki & Brie Bella airs with an all-new Thursday, December 10, 2020,  season 6 episode 4 called, “A Bella Babyshower,” and we’ve got your Total Bellas recap down below! On tonight’s episodes, in the Season 6 episode, 4, as per the E Online synopsis, “The Bella babymoon in Flagstaff comes to an end. Brie and Nicole disagree with their mom on who should be invited to their baby shower.

Nicole’s sexual frustration causes her to act out in surprising ways, including shocking Artem with her pregnant backyard skinny-dipping.”

The Bella sisters are in Flagstaff still for their babymoon. The girls are outside, and along with their mom Kathy, they paint their belly bumps. Kathy asks Birdie if she will help her plan a baby shower for Nikki and Brie. Brie reminds Kathy that people have to social distance. Then she detours and tells Nikki that she had a dream about her last night.

Kathy goes upstairs with Birdie leaving Brie and Nikki to talk about the baby shower, they both are not really excited about. They can’t have their mother and dad there, and there was a falling out with their brother. Nikki says it won’t feel like a baby shower and she doesn’t want any bitching or debating. The guys pack up, it is time to go back home.

At Brie and Bryan’s house Nikki cusses in Birdie’s room and Brie can’t believe it. Nikki starts talking about her bump and how none of her friends have touched it yet. Brie knows that their mother loves having the family together, but Nikki is terrified having everyone together.

Nikki goes swimming naked in the pool, Artem tells hit is weird, what if someone could see her, she doesn’t own the air space. He asks her why she is swimming naked in the middle of the day. Artem says that culturally, he and Nikki are on different planets. She tells him not to be a party pooper and join her. Artem refuses, he says he is not swimming naked. Nikki says she and Artem are not having sex and she is parading around more naked in the hopes of having some sex. He gets her a towel, and she goes in.

Brie and Nikki call Kathy, they show her Nikki’s outfit, and she is almost popping out of her dress. They tell her that they are going to put the guest list together, Nicole says they are going to do friends more than family. Kathy says no, they have a big family and it is going to cause family drama, feelings are going to be hurt. Nikki tells Kathy that if it is not the way they want it, they are not going to have a baby shower. Kathy can’t believe it, she says both sides of her face is going to be paralyzed with the bells palsy because the stress they put her under.

Nikki and Bella are in the car, Nikki says that she is having second thoughts about a baby shower. Brie had two baby showers already and felt really spoiled and loved. Nikki did an insane job on her previous baby showers, they were so special.

Artem tells Bella about Nikki being naked all the time, Bella admits that it is a little weird.

Artem and Brie pull a prank on Nikki, tell her that he got an uncomfortable text from their neighbor, they saw her swimming naked and are worried because her boys are underage and saw her naked in the backyard. Brie tells her the boys are traumatized. Nikki promises not to be naked anymore.

Brie & Bryan’s house, Kathy and Nikki are over to talk about the shower. Kathy says she just wants to make sure they are ok with the place settings and the menu. Kathy says she talked to Tracy, the relationship coach, Kathy says she’s great. She says she has learned a lot, the biggest thing is that there guest list is their guest list; with only ten people it doesn’t have to be family and she supports them.

Nikki is thrilled that she and Brie can take over the baby shower guest list. Kathy suggests that they have a get-together with the family after the babies are born. The girls say they are going to Napa Valley when they give birth, they both high five.

Nikki tells Brie that she wants Bryan to talk to Artem because they are not having sex anymore and she feels ugly. But, Artem feels weird having sex when she is so far along.

Brie facetimes Bryan with Birdie, Brie tells her to cover her ears so she can say something private to Bryan. She tells him that Artem is terrified to have sex with Nikki, he is afraid that he is going to poke the babies head. She tells him that maybe he can have a bro talk, but Bryan says they are not that close yet.

Bryan goes over to Artem and tells him about what Brie told him, about not having sex. Artem looks embarrassed, and so does Bryan. But Bryan tells him there is nothing to worry about if they have sex. Artem is going to take Bryan’s advice.

JJ facetimes the twins, Viviane and Alice are there as well. The twins stand up and show their baby bumps, he tells them to have a good time. Kristin calls next, the twins are so excited, then Nettie. Everything was so perfect for their babyshower, they give major props to mom. Artem shows up with flower and a Gucci baby bag.

It is time for bed, Artem brings in strawberries in bed and blindfolds, she asks if he is fifty shades of greying her. She dips the strawberry in chocolate and puts one in Artem’s mouth. Then he feeds her one and she says he is so romantic, but she wants handcuffs next time.