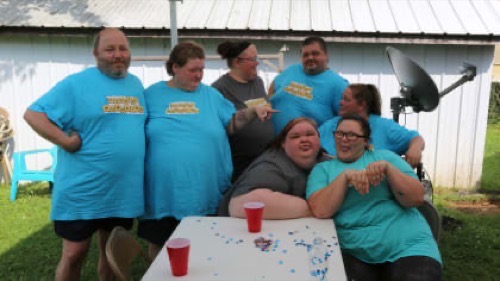 Tonight on TLC their fan-favorite series 1000-lb Sisters airs with an all-new Monday, January 4, 2021, Season 2 Episode 1 and we have your 1000-lb Sisters recap below. On tonight’s 1000-lb Sisters season, 2 episodes 1 called “Life-Altering News,” as per the TLC synopsis, “While Amy reaps the benefits of weight-loss surgery, her sister Tammy worries that she gained weight during quarantine; a visit to urgent care gives Amy life-changing news; Tammy’s family confronts her over her health.”

It’s been four months since Amy’s weight loss surgery, she lost 124 pounds, her weight now is 282. Growing up, she didn’t think she was going to live past 30 because of her weight. Meanwhile, four months ago Tammy was at 550 pounds, she met Dr. Procter’s goals and didn’t need her walker anymore. But since the pandemic hit, she slipped back, but she doesn’t know how much.

Since COVID people are stuck at home, and now they can see how she feels. Tammy says there is more temptation being at home. Tammy moved next door to Amy a few months ago, but she still needs help from Amy. Tammy and Amy still have their YouTube channel, Amy finds people are supporting her more where Tammy still has haters. Soon they will be going to see Dr. Procter and Tammy is nervous to see how much weight she has gained. Amy is scared that Tammy weighs more than she did before and maybe Dr. Procter won’t be able to help her.

Amy has been constipated, she has taken three laxatives and is in a lot of pain. Michael tales her to urgent care. Amy is worried that something could be seriously wrong, she has never had discomfort like this. It turns out, Amy is pregnant. Amy calls Tammy and tells her she just went to the ER and she’s pregnant. Amy says she had them check four times. Tammy is really not excited because it is just a few months since Amy had surgery, she is supposed to wait two years. Being pregnant now, it will be a high risk pregnancy. Amy is worried, she knows that anything can go wrong.

Amy does a YouTube video and tells her followers that she is pregnant. Now that Amy is pregnant, Tammy has to get her life together, all Amy’s time is going to be for her and her new baby. All of Amy siblings know that she is pregnant, so she decides to have a cookout because it has been a long time since she has seen them.

Being pregnant makes Amy more sentimental. Growing up though, Amy wasn’t as close to her other siblings because of age differences. Amy tells Tammy they can’t eat a lot at the BBQ because they are going to see Dr. Procter soon. Amy really wants Tammy to start doing for herself before the baby arrives. Tammy says she is tired of hearing that Amy is pregnant, but it does give her drive to take control of her life. Misty drops by to see Tammy, she tries to visit her as much as she can, but she has three disabled children at home.

Tammy talks about Jerry, her boyfriend that she met online. They had a freaking awesome time, the best part of him being there, was having someone in the bed with her. Jerry is not like all the other people she has been with, he actually cares about her and hey have talked about getting married. Misty thinks it is too quick to talk about marriage. They talk about Dr. Procter, Tammy says she knows he is going to be upset with her, but she is hoping his attention is more on Amy who is pregnant.

Tammy asks Misty to take something to the mailbox for her, Misty says she will go with her, but not for her. Tammy walks to the mail box and needs to sit down before going back because she is so short of breath. Misty is surprised that in so short a space Tammy would lose her breath.

Time for the BBQ, it is being held at their brother’s house. Amy is worried about Tammy because he mobility has gotten worse. All of the family is bigger, Tammy calls them giant teddy bears. It probably wasn’t a good idea to go to a cookout before going to Dr. Procter, but they do it anyway. Tammy is unable to get up and get food, her brother does it for her. Amy gets up for a second plate, her brother can’t believe it, she is not supposed to be eating like that since she had her surgery. Their brother tells Tammy that he doesn’t think she is putting her health to heart. He goes on to say that it looks like she took two step backwards. He tries to stress that Amy is not going to have the time to take care of her once the baby arrives.

Tammy gets on the scale at her brother’s house, he tells her that she has to have a beginning to know where she is going. He goes first, he ways 420 pounds. Tammy is terrified, she weighs 597 pounds. Tammy had lost the weight to get the surgery and now she has gained every pound back. Tammy is in tears, her brother wonders if she just quit caring and it doesn’t realize she is going to die. Tammy says that she thought Amy and Michael would be more help to her, her brother tells her that it is not there fault, it is her fault and she can only help herself.