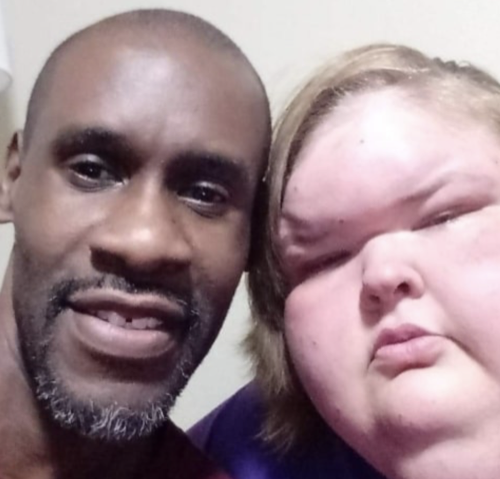 Tonight on TLC their fan-favorite series 1000-lb Sisters airs with an all-new Monday, February 15, 2021, Season 2 Episode 7 and we have your 1000-lb Sisters recap below. On tonight’s 1000-lb Sisters season, 2 episodes 7 called “Jerry Bites Back,” as per the TLC synopsis, “Amy counts down the days until her delivery with an eccentric photo shoot, while the family worries that Jerry is derailing Tammy’s diet. Tammy reveals her big secret to Jerry.”

Amy is seven months pregnant. She wasn’t supposed to get pregnant so soon after her bariatric surgery and she was also told she still needed to lose a hundred pounds before she should even consider getting pregnant. Yet, that didn’t stop her because here she is. Pregnant. Amy is happy about the pregnancy because this is what she always dreamed of and so she’s celebrating her condition. She wasn’t able to do this before because of all the health concerns. Her pregnancy is high-risk and she still needed to lose weight. Amy worried about these things for the first six months. She’s now seven months along and she wants to celebrate her pregnant state by doing a maternity photoshoot.

The maternity photoshoot wasn’t something Amy ever thought she would have. She feels blessed to be so advanced in her pregnancy and she showed off her baby bump in a series of photos with her baby daddy. They took ethereal photos of them being out in nature. They did a few kisses for the photos and they just generally had fun. The photographer had loved how the photos turned out. She enjoyed herself as well and so Amy was glad she did this. She was glad she celebrated her pregnancy before the baby comes. She was also glad to focus on herself for a change because she sometimes forgets to do that as she tries to be there for her sister Tammy. Tammy is a different stage of her life.

Tammy hasn’t had her weight-loss surgery. She still needed to qualify for it by losing the necessary weight and right now she’s struggling with just doing that. Tammy was doing well for herself for a while, but then she backslides and she hasn’t been able to recover. Tammy was still cheating on her diet. It doesn’t help that her boyfriend Jerry is in town and that he likes big women. He occasionally sabotages Tammy by bringing the things she knows she shouldn’t be consuming. Like the milkshake. The milkshake was almost a thousand calories all on its own and she shouldn’t be drinking it because she should be eating about twelve hundred calories per day. Tammy’s friends and family were so concerned about Jerry’s presence that they tried to address it with her.

They tried to tell her that he was an enabler. He liked Tammy being dependent on him and he doesn’t want that to change. Hence, he’s bringing her things he knows he shouldn’t. He knows that milkshake wasn’t in her diet and he brought it anyway because he didn’t want Tammy to lose the weight to qualify for surgery. There was also probably a part of her that was worried that if she did lose the weight that she would also lose him. He does like big girls after all and he wasn’t really taking care of Tammy. It was Amy that was worrying about her and it was Chris that was taking her to the dentist. Tammy hasn’t been to the dentist in ten years. She was long overdue for a cleaning and she was fortunate in the doctor she chose.

The dentist didn’t really have a lot of heavy patients. Only that didn’t stop him from making sure that she was comfortable in the chair and most importantly the dentist treated her like a regular patient. He later informed Tammy that there was some buildup around her teeth because she wasn’t brushing two times a day. He also mentioned that the teeth she does have were in good condition and so it wasn’t as bad as Tammy had feared. She was given a retainer that the doctor asked her to use. She said she would and really why would she? Tammy doesn’t pay attention to doctors. It doesn’t matter if it’s a surgeon or a dentist. She ignores them all because she’s hard-headed and she likes to self-sabotage.

It’s why she’s with Jerry. Jerry was literally a bag of processed chips in front of her and she wasn’t trying to work out. Either he was stupid or he was insensitive. Jerry knew better than to eat those chips right in front of her face and he did it anyway because he wants to sabotage her and she’s still seeing him because she wants him to sabotage her too. It was an unhealthy relationship. Chris tried to intervene by pulling Jerry aside and talking to him. He told the other man that it’s important Tammy gets her weight-loss surgery. He even told Jerry that he couldn’t keep bringing Tammy junk food and Jerry said in his confessional that he didn’t know how to stop because he didn’t how to tell Tammy “no” when she asks him for things.

Jerry said Tammy is hard-headed. She doesn’t want to be told “no” and she really doesn’t. She wants to cheat on her diet. It wasn’t Jerry forcing her to do it although he wasn’t much help. Jerry and Tammy later spoke about her being pansexual. She hadn’t told him this before he came to Kentucky and so it had come as a surprise to him when she told him. Not that he minded. Jerry was fine with her being pansexual. He also needed her to clarify what it is pansexual because he didn’t know what it meant and he wasn’t the first. Amy hadn’t known what it meant either. Tammy had to explain to both of them that being pansexual means she’s open to love from anyone and not because she was in love with a pan.

Jerry and Tammy also spoke about who would take care of her with him gone. Jerry has to return home because he has a life waiting for him and so that begged the question of what would happen to Tammy. Tammy has a wound on her body that needs to be treated. Jerry was helping with that and he was also making sure that she was fed. Tammy now has to do those things on her own without him. She has to fend for herself and it’s scary. Tammy fell into depression being on her own. She said that a part of her died when Jerry left. She has gotten so used to him being there for her and now she’s struggling without him. She couldn’t even make it up a ramp because she was wider than the ramp. And so Tammy later had to use her wheelchair as a crutch just to make it to Amy’s baby shower.

Amy’s baby shower had been full of games and laughter. Everyone had fun playing. Tammy and Chris also discussed Tammy. They noticed that Tammy was struggling and they questioned whether or not they should have an intervention for her.