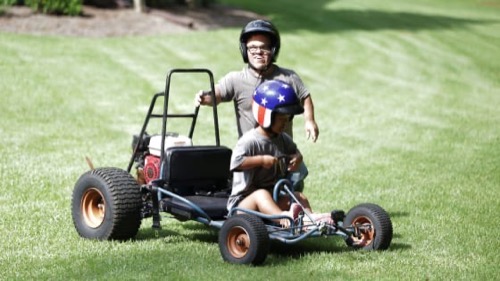 Meanwhile, Elizabeth is making big strides in her nursing career, but she is not happy to see her younger siblings behind the wheel before she has her own license.”

Amber and Trent have put some thought into go-carts. They both believed that go-carts would be a great first step for their younger children and that this would teach the younger ones what they needed to learn before they could tackle a real motor vehicle. Like, cars! Trent had recently been teaching their daughter Liz to drive and it had been horrendous time for him. His daughter was completely lost behind a wheel. She made a few mistakes before she got it right and Trent would rather not go through that again. Hence why he stopped teaching her. He also talked to his wife about go-carts. He and Amber thought they could try go-carts and so they bought one. They bought one to teach their younger kids how to break, hand/eye coordination, and how to make turns.

The younger kids loved the go-cart. They couldn’t wait to drive it and, even though they were told to use it for teaching purposes, they really just enjoyed playing around with it. The kids more saw the go-cart as a gift. A gift from their parents and one in which they loved. They were in such a happy mood that one of them even volunteered to later cut Trent’s toenails. Trent can reach his toenails just fine. He just doesn’t cut them himself because he feels he won’t do too good of a job and so he asks one of his kids to do it and this time Joseph volunteered. He thought it would be an easy job. It wasn’t until he took off the shoes that he realized that his dad’s feet smelled and that his nails were in an odd shape.

Trent’s nails curved in on themselves. They didn’t lie flat and so getting the nail clipper around one was tough and Joe had to put his back into it. He did manage to trim his father’s toenails. He also knows that he wouldn’t want to do this again and so this is probably the last time he volunteers to cut them. Trent got a pedicure. He liked it and he explained why one of his nails was so curved. He was born with a sixth toe on one of his feet. It wasn’t a little person thing. It was simply an abnormality and his parents had it removed. Only that toenail still grows oddly in spite of the correction. Trent didn’t mind it because again he wasn’t the one cutting it. It always someone else and that usually meant it was their problem.

Other than that, the family were doing good. The only concern seemed to be Liz. The parents were concerned for their daughter Liz because she recently graduated and she was going to school full-time as well as having a job. She got a job at an assisted living facility. She helps take care of the elderly and unfortunately a lot of people have quit since the coronavirus came to the United States. The coronavirus was especially hard on the elderly. The people that worked with Liz hadn’t been able to take the stress and so they quit and Liz stepped up to cover for them. She was working an eighty hour week when she should have been doing forty. And often she would sleep over there which made things harder on her when she had school work.

Liz’s parents were afraid she would burn herself out if she kept going like this. They wanted her to put down limits to what she can do at the retirement home because they didn’t she should be working that long when she has school on top of it. They also wanted her to have a chance to relax. She has to give up so much because of the pandemic that they didn’t want her to lose out on what’s left of her childhood and that’s why they put together a high school graduation for her. Her dad Trent built a stage with a backdrop. He made it look like a real graduation ceremony and that way Liz still got to walk the stage. She had loved it. She loved what her dad bult for her and that she got to celebrate all of her hard work.

Liz still doesn’t have her license or learning permit. Her parents have come up with excuses after excuses for why they couldn’t keep teaching her and so she gets a ride to work from her sister. Anna is back home. Her college has moved her courses to online and being home meant she couldn’t continue working at a day care over there. So, Anna gives her sister a ride to the retirement home. Her parents meanwhile continue to work. Her mother Amber is back to teaching classes in-person and its hard because as a little person she has to deal with questions from her students. They tend to ask why she’s so small. They also bring up words like midget and so Amber has to correct them. She uses the first week of school to teach them about her condition. She also teaches them to not use the “m” word.

When she wasn’t doing that, Amber was helping Trent in building a path for the go-cart. The parents hadn’t wanted the kids to mess up their grass or their shrubbery and so they built a go-cart trail. This way the kids get to drive it more. They didn’t have to worry about protecting the lawn and they could focus on having fun. The parents desperately needed to do this because their kids were getting bored of what little they could drive. They had needed something bigger and better to hold onto their attention. Both parents and their kids cleared out a trail. They cut down trees and removed low hanging branches and they created this large path that would look much smaller while whoever was in the go-cart was driving around.

There was just one problem with the new course. It was still bumpy and it wasn’t an easy drive for anyone. Also, Liz quit her job at the retirement home and she got a job as a nursing assistant at a medical office. And this new job didn’t have her stressed or as overworked as her previous job.