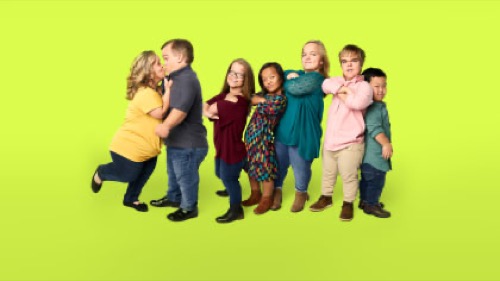 Tonight on TLC America’s largest know little family, 7 Little Johnstons returns with an all-new Tuesday, June 1, 2021, episode and we have your 7 Little Johnstons recap below. On tonight’s 7 Little Johnstons Season 9 Episode 2 “Any Place but Home,” as per the TLC synopsis, “Tensions between Trent and Amber and their children Jonah, Anna, and Liz continue to grow, pushing the kids to ramp up their efforts to leave the house. Then, things explode when Amber presses Anna for details on her plans to move out.”

So make sure to bookmark this spot and come back from 8 PM – 9 PM ET! for our 7 Little Johnstons recap. While you wait for the recap make sure to check out all our television recaps, spoilers, news & more, right here!

In tonight’s 7 Little Johnstons episode, the kids did some shopping. They bought new clothes and so now they have to alter them. The family has to alter clothes they buy in stores because stores never take into consideration little people when they order clothes from companies. There were also no companies that made clothes for little people. Everyone just makes big people clothes and so that’s why the family has to alter them.

Their mom Amber helps out. Amber pins the clothes where the kids needed them to be and then the kids can take them to get them altered professionally. The kids or at least the older ones are all making money. They can afford alterations on their clothes and it was also great they had jobs.

Both Amber and her husband Trent want their kids to be independent. Elizabeth goes to school full-time and she also works full-time. She wants to move out soon. She has a plan and a long work history to back her up while her sister doesn’t have that. Anna also wants to move out. She and her mother have been butting heads a lot. Its caused tension and so Anna thinks it will be easier if she moves out. Anna is working part-time.

She’s going to school full-time. She wants to move out and go live with her friend Faith. Jonah is also working. He was working part-time and he wasn’t going to school but he too was getting frustrated with living at home with the parents. It seemed that whenever they were doing something right that was when their parents complained about something else.

The latest thing in the kitchen. Amber was tired of having to clean up after the eldest three because they were the messy ones and she didn’t mind when Trent made a mess because he was helping to pay the bills. But the older three hated having their parents bring them in for a family meeting just to reprimand them.

They couldn’t wait to get away from their parents and even Elizabeth was fed up. Elizabeth said all the nitpicking has given her even more motivation to move out. She already has a storage locker that she was slowly filling up with furniture. She was also sending out applications and she was having a hard time because landlords see her age and that she doesn’t have a roommate and they have a hard time wrapping their heads around a nineteen-year-old keeping up with the bills.

Elizabeth was not moving with her boyfriend. She doesn’t want to live with him before marriage and she was open to marriage right now. She was willing until whenever he was ready, but she wasn’t going to live with him without the ring because that’s what her parents did and she wanted to follow their example.

Her parents meanwhile were enjoying a break from kids. Their younger kids had their own thing going and their older ones were either busy working or were doing their best to stay on their parents’ good side. The parents, therefore, were doing something for themselves. They were outfitting the pavilion with a teepee contraption. It would be a suspended day bed with netting and it was just for them.

They loved that thing. Trent had a hard time climbing into it at first but he got there eventually and the same could be said of his daughter Anna. Anna, Emma, and Elizabeth later took alteration classes. They wanted to learn how to alter their own clothes because that would save them money and Anna did alterations as she did everything else. She did it really slowly. Her family makes fun of her for being a slowpoke and Anna does try to go faster. It just never works out that way. She did what she did at her own pace and she got to the end eventually. The only thing Anna wants to do fast moves out. She was still considering moving out while Elizabeth was looking at houses. Elizabeth finally got tired of waiting on landlords and she made a post on social media.

Elizabeth said she was looking for a place to rent. One of her mom’s coworkers saw the post and he mentioned that he flips houses and that he’ll have a few properties ready to rent by mid-February. Elizabeth was going to look at the houses with her parents. They didn’t want her to have too big of a place because of maintenance and they also wanted to make sure it was in a good neighborhood. In the meantime, Elizabeth was packing up her stuff. She was packing up her summer clothes while they were in winter and making sure that her t-shirts were ready to move even if she wasn’t quite there yet. Her sister Anna was also looking at places. She and her friend Faith were both looking at places to rent and Anna later mentioned it to her sisters.

The sisters tried to alter their clothes themselves for the first time. Elizabeth did it and it was perfect. Emma and Anna tried it and they both made a mess on the arms. One sleeve was too short and the other sleeve too long. While they were altering clothes, Anna brought up the places where she’s been looking to rent. Amber overheard the sisters talking. She came in and offered Anna some advice. She thinks Anna needs a desk. Something they could paint and Anna was hopeful when Amber brought up her moving out. Anna was moving out so that she could have a great relationship with her mother. She thought it was already working when her mother seemed to be trying to help her and then Amber brought Anna’s job. Amber wants Anna to find a full-time job before she moves.

Amber was on Anna for getting a different job because she said Anna would need that to pay her bills but Anna can pay those bills with her current job and the fact she’s getting a roommate. Why Amber couldn’t be happy with that is up to her. She kept prodding and prodding and then she left in frustration while Anna was the one breaking down in tears.