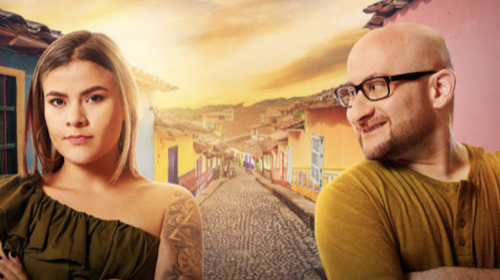 So make sure to tune in tonight between 8 PM – 9 PM ET for our 90 Day Fiance: Before the 90 Days recap.  While you wait for our recap make sure to check out all our television spoilers, news, recaps, and more, here!

In tonight’s 90 Day Fiance: Before the 90 Days recap, Gino was ready to meet Jasmine. Jasmine was the beauty he met online. It didn’t matter that she was from Panama or that he was from the United States. He just wants to be with her. Gino hasn’t been seeing anyone seriously since his divorce. He hadn’t been ready to get serious about anyone back then and he was only doing so now because he said Jasmine was different. Jasmine is younger.

She’s beautiful. Jasmine is an English teacher. She’s a mother and she has two beautiful boys. One lives with her ex-husband and the other lives with her mother because he was struggling during the lockdown in the city and so now he lives in the country side with his grandmother. Jasmine lives with a roommate.

Both Jasmine and Gino wanted some privacy once he got there. He therefore sent her money to rent a hotel suite and the room is gorgeous. It has a kitchen. He has a great view and so the room was a great idea. But Gino doesn’t have a job. He’s living on his savings and he and Jasmine could have both just ignored the roommate and saved the money. They also have trust issues. Gino originally lied about his age when they first started talking to each other online and then there was the suspicious nature of Jasmine. Jasmine doesn’t trust any man. She thinks they’re all cheaters because in spite of being the perfect way her ex-husband still found a reason to cheat.

Jasmine is once again a beautiful. She said that she did her best to keep her looks, cook, cleaned, and did everything to be a biddable wife. But still men cheat. Jasmine is naturally suspicious of every man now and she has Gino send her evidence that he’s not cheating. She gets photos of his from his cell phone. Video.

She is deeply serious about not trusting him and he still wants to come see her. Another one traveling is Caleb. Caleb was going to Turkey to meet up with his Russian girlfriend and so he told his parents about the trip. He wasn’t going to tell them he was meeting up a girlfriend. He was trying to keep things vague because he knew they didn’t approve of premarital sex and so he only said something after a lot of prodding.

His parents asked him why Turkey? They then asked about his friends. They then asked him if the friend he was meeting up with was a woman and after the truth came out they asked for more details about Alina. They wanted to know everything. Caleb told them that she was a little person. She was about three feet tall.

She often gets tired with walking around and needs to use a wheelchair to get around. His parents became concerned about whether or not their son was ready to be in a relationship with someone with special kind of needs. Caleb meanwhile was worried about sex. He’s never dated a little person before and he wasn’t sure about what kind of sex they could have. And what positions were no longer feasible.

Alina’s family were also worried about her trip. They convinced her to take her best friend and roommate with her. They wanted to make sure that she has someone in case it goes south with Caleb. For both emotional support and security. Then there was Memphis. Memphis is an American in a relationship with a man named Hamza and she couldn’t wait to get to Tunisia to marry him. She wanted to get married literally the first day there. Only she doesn’t know Arabic.

He doesn’t know much English. They can’t really communicate and the only thing they could agree on is sexy time in which they have phone sex or she just gets naked for him on camera. Memphis is also a parent. She has two young kids and thankfully she has a great co-parent in her ex-husband.

But Memphis also didn’t tell her boyfriend about the one night she spent with the ex. It was a dark moment for her and they didn’t sleep together but she did spend the night at his house and she failed to mention it to her boyfriend/fiancé. She also has never had an honest conversation with him.

The language barrier meant he doesn’t know how stubborn she could be or that she’s a hothead. Even her own mother calls her impulsive. She said Memphis rushes into things without thinking and that her temper can get out of control. Memphis was used to American men. Men who wouldn’t necessarily mind her taking the lead and that couldn’t be the same as life in Tunisia. There’s been a couple of guys from Tunisia on the show in the past. They’re always shocked by American women.

Later, the show introduced a new face. Mike is a sweet man in his thirties. He’s a volunteer firefighter, he likes entertaining himself with legos because they relax him, and he lives at home with his father and grandfather. He helps take care of them both. He’s also an American and he’s dating a woman named Ximena. Ximena is from Colombia. She’s beautiful and Mike and her met online. They’ve been talking for a while now.

Mike was ready to propose. But he and Ximena also suffer from communication issues. She doesn’t know English. He doesn’t know much Spanish. He know a little however not much and so talking to each other has been an issue. And Mike is also another one who might be deemed impulsive.

Mike was ready to marry Ximena. He wanted to move her into the house with his dad and grandpa and his brother had to caution him. His younger brother said he sometimes feel like the older one because he sometimes had to protect Mike. Mike is a little naïve to think his situation is ideal what with not really knowing Ximena or expecting her to help out with his elderly relatives. Except as bad as Mike is, he is not poor Kim.

Kim is dating Usman. The same Usman from a previous season who married an American and had it blown up in his face because she dumped before he could get to the country. And so he’s been shopping for another American ever since then because he wants his music career to take off.

Usman wasn’t even lying to Kim. He had her travel all the way to Tanzania to meet up with him because he told her that she could potentially be his girlfriend and that was enough for poor Kim. Usman was speaking with other American women. He was even dating one when the relationship ended because she supposedly got jealous of his fans liking and commenting under his pics. Kim however wasn’t a jealous person. Usman’s first word to describe her was “loyal” and he said he was looking for this after his ex-wife. Usman is a jerk. He’s trying to use Kim to further his career in the United States and unfortunately a good woman was about to get hurt for the second time. And she didn’t deserve it.

Caleb meanwhile had make several mistakes. He booked a hotel for his girlfriend and he didn’t take in account her special needs. He didn’t get an accessible hotel. He picked a beautiful hotel. It just dint have an elevator for her wheelchair and so she had to walk up two and half flights of stairs. He knows she gets tired easily. She’s already told him and its clear he didn’t take that into account. There were several problems with the hotel. The bed was way too high. It was even high for her tall friend and that was saying something. Everything was too high. This includes the toilet and so she has to take a chair everywhere in her room just to navigate it. It’s a good thing she brought her friend because she was going to need the help.

Gino later arrived in Panama. He met with Jasmine for the first time and they kissed and hugged and everything was going great until they got back to the hotel room. Gino gifted her a toothbrush.it wasn’t even gift wrapped. Jasmine pretended to like it but she hated. She also didn’t like his second gift. He brought along pregnancy tests. He wants to start trying for a baby right away and she doesn’t think they should rush into it. They were still getting to know each other. Jasmine was also hiding the fact that she’s on birth control and there were other warning signs. It was at the hotel that Jasmine asked to check his phone because she wanted to check up on him and so Gino told her facial recognition unlocks his phone. And so her first response was to say that’s good because that way she could unlock his phone while he’s sleeping.

And that wasn’t a good sign for their future.