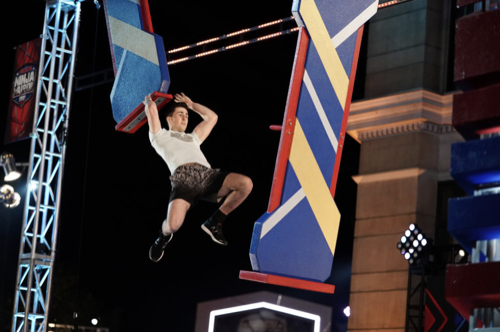 The semifinals begin in Los Angeles, where the competing ninjas will face up to 10 challenging obstacles, including new obstacles Wall-to-Wall and the Inverter; the top two runs of the night will face off in the Power Tower.”

In tonight’s American Ninja Warrior episode, it’s Night 1 of the Semifinals. The Semifinals’ obstacle course is longer and tougher than anything seen in Qualifiers. It was also the first time that the little ninjas got to go through nine obstacles. This year the age limit was lowered to fifteen and so the crop this year was the youngest it’s ever been. First up was Christian Youst. He was sixteen years old and a gamer. He said his experience as a gamer was a great crossover for him into the ninja world because hand/eye coordination was a difference between winning and losing. Christian raced through the first half of the course. He didn’t even hesitate as he went up the Warped Wall and so it was the second half of the course where he took his time.

Nicholas had no problems with the same obstacles that took out experienced ninjas. But when it came to the Inverter, he lost his grip and fell into the water. He still made it pretty far and he was quite fast. He will have to see if he makes it into the next round. Next up was Isiah Wakeham. He wasn’t one of the little ninjas because he was in his twenties but he was a sophomore on the course and he was competing against his sister. Isiah was also an artist. He decided on custom shirts for many of the ninjas on the show and he also raised money for charity with his artwork after Hurricane Harvey devastated Texas. Isiah designed his own shirt to show his whole history as an artist. He also had a bet going with his sister.

If both of them made it to the Finals, their mother will have to get a tattoo. Isiah had his run first and he made it all the way to the Inverter when he realized he made the wrong decision and he fell into the water. Next up was Tiana Weberly is otherwise known as “Sweet T”. She was a stuntwoman and she’s known as a part of the special world of video games. She swears suits that monitor her movement and game designers added her stunts to the game. Tiana has always had plenty of support. She has plenty of veteran ninjas supporting her and she also has her family. They cheered her on as she made it through the first half of the course. She made it to the second half and she made it as far as the ninth obstacle when she decided to try Turning Forks.

Max was also the first to figure out the Inverter. He was also the youngest to ever hit a buzzer during the Semifinals. Max paved the way for the rest of the baby-faced ninjas. Next up was Zhanique Lovett. Some years ago, she failed to make it up the Warped Wall a full three times in Semifinals. She doesn’t want that to happen again and so she’s been training until she’s a hundred percent. Only she fell before she could even get to the Warped Wall and odds are she won’t be going to the next round. Next up was Lance Peekus. The Cowboy Ninja took his shirt off. He flexed and had fun as he made all the way to the ninth obstacle where he fell on the Inverter. Next up was Brian Burkhardt. He was the lawyer ninja.

The legal guy sped through the course. He fell quite hard on one of the obstacles and he got blood on his face from his nose and in spite of his injuries he just kept going. He made it all the way to the very end where he climbed up the ladder. He became the second finisher of the night. He also had the fastest time of the night and that meant great things because the Power Tower was back. The two fastest ninjas tonight will compete on the Power Tower for the right to have privileges. Next up was Isabella Wakeham. She was a teenager. She was the sister to the sister/brother duo and her brother already had his run. It’s now Isabella’s turn and she had a strong start. She raced out onto the course. She made it to the back half with no problem and she ended up falling in the same location as her brother. She fell on the Inverter.

Over the commercial break, there was the third finisher and so the pressure was on Elijah Browning. He had the second-fastest time during Qualifiers and he wants his chance at the Power Tower tonight. He raced through the course. He got to the split decision at obstacle nine. He chose the Inverter and he fell on the Inverter. Next up was Deren Perez. He was originally from Guam. Guam is a US territory located in the South Pacific. He made it as far as Tuning Forks when he fell and he made it far enough fast enough to make it to Vegas. Next up was Jody Avila. He was Dominican and he was incredibly proud of his heritage. He used to visit all the time as a kid and he was the first Dominican ninja the island has ever produced.

Jody was also known for being a big dude. He’s been getting stronger and stronger with each season. He had a great season last year. He’s trying to recreate it this year and unfortunately, he fell. He landed in fifteenth place. There was still one more person to go up and that was Daniel Gil. Daniel was the speed demon. He wants that safety pass from the Power Tower and he almost won it all last season. So, this season should be his year. Daniel fell during Qualifiers and that hasn’t happened in years. He was hoping not to have that repeated again tonight and he showed up as strong as he could be. Daniel raced through the course. He was so busy going fast that he didn’t even wait or slow down to yawn. Yawning helps clear his head.

Daniel sped through everything and he ended the night with the fastest time. Daniel will be competing against Brian Burkhardt in the Power Tower. It was just the two of them racing through the course and somehow Brian went faster than Daniel. Brian pressed the buzzer. He won the safety pass.