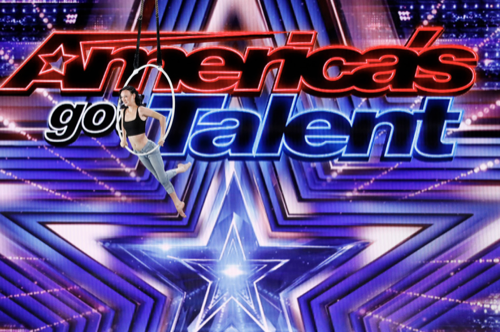 Tonight on NBC America’s Got Talent begins with an all-new Tuesday, June 29, 2021, episode and we have your America’s Got Talent recap below! On tonight’s AGT season 16 episode 5 “Auditions 5″, as per the NBC synopsis, “The auditions continue as a variety of acts and contestants of all ages audition for the chance to win $1 million.

The golden buzzer is still in play and could send lucky acts directly to the live shows to compete for America’s vote.”

In tonight’s AGT episode, the episode begins with host Terry Crews welcoming the judges; Simon Cowell, Heidi Klum, Howie Mandel, and Sofia Vergara. There is only one Golden Buzzer left and it belongs to Heidi Klum.

Positive Impact Movement is an aerial acrobatic group of four from Los Angeles, CA – they inspire positivity. The judges give them a standing ovation.

Judge’s Comments: Sofia: “I have to say that was quite a surprise when the shirts came off it was another level of business. It was amazing.” Howie: “I loved the act.” Simon: “What was really incredible was the amount of time that you had to put into this. It is a gymnastic act and a dangerous act in one. Very clever.” Heidi: “I have to say I liked it a lot. There were so many crazy things that you did that we have never seen before. Congratulations.”

Four yes votes get this group on to the next level.

The Empower Pack is an animal act from Brandywine, Maryland and they want to wow Simon Cowell who is a huge dog lover. Ms. Petunia, a pug, has an enormous crush on Simon.

Judge’s Comments: Sofia: “I loved how one of the dogs put the fire out, I really enjoyed it.” Howie: “I love dogs, but I didn’t find it inspiring or aspirational.” Simon: “I hate to say this but I agree with Howie, but I love dogs and the pug has a crush on me and I feel bad, but I have to say no.” Heidi: “I think it is so hard what you do, it is a yes for me.”

Howie and Simon say no, Heidi and Sofia say yes – they don’t make it through.

Alexandra Cote is an animal act from Quebec, Canada. Being on AGT is a big dream, she never thought it would be possible to be on, her dream is to have a dog training center. A standing ovation from the judges.

Judge’s Comments: Simon: “I think this might be my favorite dog act of the season so far. I love that the dogs were having a good time and I think you are going to do really well in this competition.” Heidi: “That just put the biggest smile on my face. It was adorable.” Sofia: “I wanted you to keep going and going. It was fantastic.” Howie: “We see dog acts all the time but we saw unique tricks, it was more energetic and more in synch than any other animal act that we have seen on the history of AGT.”

Four yes votes get Alexandra and her dogs through to the next round.

Gangstagrass Band is from Brooklyn, Philly, Pensacola, Omaha, and Washington DC, very different places in the country and music has brought them together. A standing ovation from the judges.

Judge’s Comments: Howie: “I think you are the recipe that America has been looking for till now. America is this stew of cultures, we should be all singing together.” Heidi: “I love the music, I was loving it, I love you guys, it was fantastic.” Sofia: “It was the perfect combination for me, I am very excited for you guys.” Simon: This was a really good audition, this was an original song, which makes a huge difference. This is one that we are going to remember.”

This group is moving forward with four yes votes.

Delicious Duane Douglas comes on stage, in fish net stockings and a Speedo. He says he is a no contact professional wrestler, but for a living he is a legal assistant at court. Duane is from Philadelphia, PA. How hits the red buzzer, then Heidi, then Sofia and Simon.

Judge’s Comments: Howie: “There are people out there who question if professional wrestling is real and I am here to tell you this was real bad.” Sofia: “There was nothing delicious about that.” Heidi: “You guys are not booing loud enough.” Simon: “I think you won the crowd over (loud booing from the audience)”

Easy to say that Delicious Duane Douglas has left the building for good.

The Moon City Masters are Jordan and Taylor, a singing group from Brooklyn, NY, they are twins. They want to tour the world and make albums, they want to do this for the rest of their lives. Simon hits the red buzzer and stops them mid way through the performance.

Judge’s Comments: Simon: “That was actually very boring, very sleepy. I thought that was going to be a lot better.” Heidi: “I am certainly in a better mood because I love twins and I would say give you a shot.” Sofia, Simon and Howie say no.
The Sklar Brothers are comedians from Los Angeles, CA – another set of twins.

Judge’s Comments: Sofia: “I have never ever in my life experienced anything like that.” Heidi: “There have been comedians were I have laughed more and out loud with tears out of my eyes and I didn’t have that this time.” Simon: “I think it is really cool to have two people, twins doing comedy together.” Howie: “I loved them. In this day and age it is hard enough to do comedy but then to find someone who has the perfect timing with you.”

Four yes votes get this comedian duo group on to the next round.

Melodie Blaize arrives on stage with roller skates, she is from Fort Lauderdale, FL and she cuts clothes for a living. She asks Heidi to be her model, Heidi changes into an oversize t-shirt. Simon hits the red buzzer.

Judge’s Comments: Howie: “I am going to say no I didn’t think that was much of an act.” Heidi says yes. Sofia: “I don’t think it was an AGT performance.”

Lea is a quick change artist from France. A standing ovation from the judges.

Judge’s Comments: Howie: “I have never seen a quick change artist better than you on this show. The outfit to fly in thin air, its magic, it was beautiful.” Sofia: “I am so in shock, you were having a great time while doing it, beautiful.” Simon: “Usually this type of act has two people, this was really cool, you have great showmanship.” Heidi: “I loved it too, you were doing real magic. It was incredible and flawless. I think you should go straight to the live shows.” Heidi hits the golden buzzer.

Thomas Evans is from Seattle, WA, living in Berlin. He skips rope really fast while he dances around. Howie hits the red buzzer, Heidi tells him that he is jealous.

Judge’s Comments: Howie: “I could not do that, but I see people doing that all the time at the gym. I am not seeing anything I haven’t seen before.” He gets three yes votes from Heidi, Simon and Sofia and Howie is called grumpy.

Lea Hinz is an aerialist and she and Bob’s Dance Shop don’t make it through.

Tory Vagasy is a singer from Florida and she is a party princess full-time for kids. Her dream is to be on Broadway.

Judge’s Comments: Sofia: “You absolutely deserve to be on Broadway. You are a princess.” Heidi: “I agree, you have a beautiful voice, you are incredible.” Simon: “Do you know how many people are looking for record contracts right now, I see huge potential.” Howie: “There is no mistaking that you have a powerful voice and I think that you have the energy, the stage presence – but I don’t enjoy that kind of music, so for me, it is a no.”

Simon, Heidi, and Sofia say yes, Tory is sent to the next round and Howie is not going to crush her dreams.

Peter Antoniou, is from London and he is a psychic living in Seattle, WA. There are hundreds of tiny boxes on the floor and Simon takes Sofia’s engagement ring in one of them, Peter is able to find the ring.

Judge’s Comments: Howie: “I love you, you are smooth and confident, that was a lovely audition.” Heidi: “I loved it too, it was fun, it was interactive, I love your beard, I love everything.” Sofia: “There is no way you knew about the rainbow, that was amazing.” Simon: “The first part was great, the second part was amazing.”
Peter makes it through to the next round.

Dokteuk Crew is a dance group from Dawjeon, South Korea, and they are inspired by Anime. A standing ovation from the judges.
Judge’s Comments: Sofia: “I didn’t know what was going on but I liked it. It was fun, dynamic, incredible.” Howie: “You are absolutely on the money, that is my favorite dance the entire season.” Heidi: “I loved how you guys hit us with the first note, very cool. I didn’t know what was going on behind the sheet.” Simon: “I love your personalities, this is a great audition.”
Four yes votes for this dance crew.

Jayy is a singer from the Dominican Republic living on Drexel Hill, PA. Her parents owned a grocery store and they were robbed, her parents were murdered in front of her.

Judge’s Comments: Sofia: “That was spectacular.” Howie: “As someone in this business, we get interviewed and asked how do we want to be remembered and I always say my legacy is my children. I felt like I was listening to your parents, they were here listening through your voice and your heart.” Heidi: “It was moving, your strength was showing up in you.” Simon: “I think what you just did was incredible, to be able to sing a song like that with all the memories in your head, was extraordinary. People like you are why we do this show, you are an incredible person.”