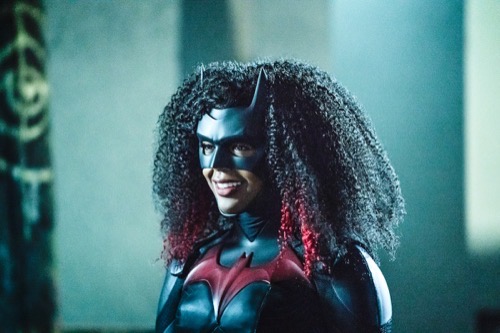 Tonight on the CW the series Batman airs with an all-new Sunday, January 24, 2021, season 2 episode 2 and we have your Batwoman recap below. On tonight’s  Batwoman season 2 episode 2 called, “Prior Criminal History” as per the CW synopsis, “After her quick spin in the Batgear, Ryan Wilder is back to facing the daily challenges of life as herself.

Alice has a new, devious plan to get the attention of both Gotham and Safiyah; Ryan comes face-to-face with Alice for the first time.”

Alice is in the sewer, she has a rat in her hand and introduces it to Mouse. She takes duct tape and tapes the rat to Mouse’s chest. Bats are everywhere in the sewer, one jumps on Mouse and then looks up at Alice. Next, we see a woman wearing a cat ears bandana, she is walking through a deserted area that looks like a garage under a highway when she is attacked, Ryan Wilder, our new Batwoman comes to the rescue.

Ryan is at a job interview and sadly her prison stint doesn’t look good on a resume but it does give her a good skill set.

We see thugs come into a shop to rob it and Ryan is there, they get away and when she goes to check on the clerk, the cops come in and she is arrested. Sophie shows up in the interrogation room, Ryan says she didn’t rob the place. Sophie says she was standing over a bloody cashier when the authorities arrived. Sophie tells her that if she is always in the wrong place at the wrong time, then maybe she should find a new place. Ryan tells her to go after real criminals, like Alice. And, she knows why Jacob won’t go after her.

When Ryan is released, she goes to see Mary and questions her. Mary tells her that her mom died in her arms because of Alice, there is no love lost between them. Just then, a body is brought in and it is Mouse, he has bites all over him.

Julia is in her car, Alice is in the backseat and puts a knife to her throat, she tells her that she is there to save her life. Alice tells her that retribution is coming for the two of them, they need to have each other’s back. Julia tells her that she sounds desperate, and now that Kate is gone, she has nobody. Just then, Alice stabs Julia in the side and leaves her car.

In the morgue, Luke shows up and says Mouse has to have at least a thousand bites on him, but he died of poisoning, the same poison that killed her mom, which Alice has access to. All of a sudden, Mouse starts jerking, a bat comes out of him and flies around the morgue.

Julia calls Luke and tells her that Alice put a knife in her ribs, and that she was planning something, the body count would be high. Ryan thinks Alice is going to strike at the Batwoman rally that they see on TV. Ryan offers to wear the suit and tell people to go home so there is nobody there for Alice to hurt.

At the rally, Sophie and Jacob show up, she tells him that the people want the same thing as them, for Kate to return. Meanwhile, Ryan is all dressed as Batwoman and has showed up as well. Mary tells Ryan to look heroic, straighten her back and take her hands off her hips. The people down below see Batwoman and they are excited, Jacob looks up and says, Kate.

He looks through binoculars and tells the Crows to get that imposter off the roof. Ryan tells the people to leave because they are in danger. Alice shows up, she tells Ryan that she doesn’t know who she is, but she is not Batwoman. Alice runs at Ryan, who fights back Luke is watching and tells Mary they never should have let Ryan wear the suit. Then, thousands of bats descend on Gotham people, and even knock them to the ground as Ryan is fighting with Alice.

Ryan tells Luke that Alice used some kind of device to draw bats to the city, Mary is worried that the bats could be toxic. Mary leaves to return to the clinic. Meanwhile, Alice tries to escape through a stairwell. Jacob is on the ground, shooting at the bats overhead. Ryan tells Sophie that the bats are toxic and anyone gets bit, they should go to the hospital. Sophie looks at the bat suit and asks who is she.

Mary is in the clinic, patients are starting to come in. She goes into her office and Alice is there, she tells her to relax, she is not about to lose another sister. She gives her some blood that will treat the nasty toxin. Mary tells Alice that she thinks she misses Mate and this is her sick way of grieving. Alice goes to the doorway and says she met the new girl, and this one actually wants to kill her, she is going to be a handful.

Mary is on her way to Hamilton Dynamics, she hopes the can synthesize the antidote so there is enough for everyone. Sophie arrives in the clinic as she is leaving and asks her how can she trust Alice, Mary replies that they have no choice.

Ryan is in the bat mobile, she found the device that attracted the bats, she draws them to a bus, gets them inside and blows it up. Hope has returned to Gotham, everyone is getting treatment and Hamilton Dynamics takes the credit.

Mary is with Sophie, she thinks this the opener for Alice, she is probably up to something bigger and better.

Sophie goes to see Julia and asks her if she knows anything about the new Batwoman, she says no. But she does have some info about Kate, where she thinks she may be held at. Julia asks Sophie if Kate told her that she loves her. She wants to know if they are over because she doesn’t trust her, or because she is not Kate. Sophie says both.

Mary goes to see Jacob, he says he doesn’t want to make the same mistakes he made with Beth, he believes Kate is alive. She tells him they need to work together, he hugs her.

Luke and Mary arrive in the bat cave and Ryan is there. Luke tells her that he appreciates everything that she did, but they already have a Batwoman. Ryan says she can’t help feel like the suit found her, she begs for a chance and says that she can bring hope back to Gotham. Mary says she hopes she is right, because she and the city need a Batwoman. Luke tells her that Batwoman had a code, no killing and she can assume the role until Kate returns.

Ryan starts to read through the ledgers, letters from Kate to Bruce. Then, she jots down a new letter and starts with Dear Kate. Then we see Sophie, she pulls a gun on Alice and gives her handcuffs. All of sudden, Tatiana shows up, she knocked Sophie and Alice tells her that if she is there to kill her, she would already be dead. Tatiana then attacks Alice and we see blood pour neck.