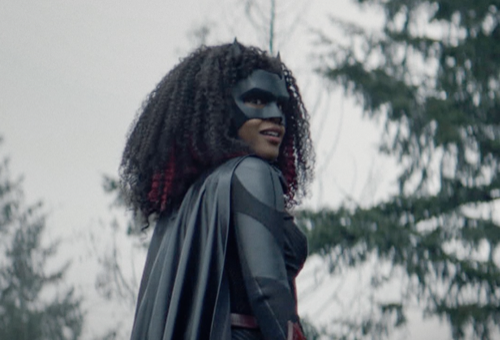 Tonight on the CW the series Batman airs with an all-new Sunday, March 21, 2021, season 2 episode 8 and we have your Batwoman recap below. In tonight’s episode called, “Survived Much Worse” as per the CW synopsis, “Batwoman’s abilities are tested like never before, while Alice’s search for Kate continues; Sophie and Jacob set their sights on Coryana; Luke and Mary contend with an unexpected guest.”

In tonight’s episode of Batwoman, Ryan is writing a letter to Kate, she says today is the day she is supposed to die but she is not scared, her mother put her on earth for this, she is going to kill her. Actually, Alice is writing a letter as well, both are very different, and we barely get which words belong to whom.

Mary catches Ryan giving herself an injection and tells her if she does, she will be lucky to have twenty-hour hours. Ryan says that is all she needs, she put a tracker on Alice, and she is probably at Coryana by now. She will follow her route, find Kate, get the desert rose to heal herself, and come back with Kate.

Luke goes to see Sophie; she knows that he is working with batwoman. He says yes, and she is dying, they need the desert rose to save her. Sophie tells him that the deal Alice made was that she would kill Ocean to get Kate back, and she doubts that she should up at Coryana without him.

Luke is with Ryan and Mary; Ryan is shocked that he told a Crow that he is working with Batwoman. Luke says it is better than losing both batwomen in one swoop.

Sophie and Jacob are attacked when they are on their way to Coryana. Ryan tells Luke and Mary she is injecting herself, she is saving Kate, Jacob, Sophie, and herself.

Ryan has her batwoman suit on, Mary reminds her that she has twenty-four hours. Sophie says if she finds Kate and she comes back at batwoman, what happens to her. Mary says she doesn’t know, but she really wants her back. Ryan says if she does die, Mary is in charge of her baby plant that Angelique gave her, it is all she has left of her. Mary says she definitely has to come back because she is no good at caring for plants.

Batwoman is in a plane, Luke gives her instructions on when to jump right over Coryana’s airspace.

Alice is in Coryana, Safiya tells her that she considered Ocean and brother and erased their memories of each other because she felt she was a bad influence on him. Alice says she brought her brother with a knife in his chest to her, she now wants her sister so she can do the same to her. Safiya tells Alice that there was a tracker in her boot she was being followed.

Sophie and Jacob wake up, they are in a jail cell. They are in Coryana for a front-row seat to Alice killing Kate, and Safiya wants them to join her army.

Ryan jumps, she is right on target and coming in fast. She pulls her parachute and lands. Ryan tells Luke and Mary that she landed safely. She looks around and sees all these roses planted, Mary tells her that must be the desert rose.

Luke loses connection with batwoman, she looks around and sees some men, dressed in some sort of warrior outfits and they are holding knives.

Alice tells Safiya to give Kate. Safiya says she doesn’t even know why she wants to kill her. She asks her what happens when Kate’s dead and everyone still hates her. Safiya tells her that she needs to know that this is what she wants more than anything, Alice says more than the air that she breaths.

Safiya’s men bring in batwoman, Ryan tells her to loo a little harder at Ocean, make sure it is really him. Safiya goes over to him and finds that it was just a mask, it isn’t Ocean. Safiya turns to Alice and says she still has feelings for Ocean. She then turns to her guards and tells them to put Alice with the bat. Meanwhile, Sophie and Jacob have escaped and are outside on the grounds.

Alice and batwoman are in the cell together and Alice realizes the tracker was batwoman. Ryan says she is terrified of killing her sister, she doesn’t her back to kill her, she just wants her back. Alice says someone has been taking a long time thinking about the girl they blame for their mom’s death. Ryan tells her that the tiny sliver of humanity that Alice has won’t let her kill her sister. Safiya comes into the cell and tells Alice if she wants Kate, she can have her.

Safiya offers to help batwoman with something because she did something for her, outed Alice with the fake Ocean. Ryan tells her that she needs desert rose because she was poisoned, Safiya says she can have as much as she needs. Then Ryan asks for Kate, and Safiya says no, she will only get one thing, Ryan chooses desert rose.

Safiya has found Ocean, she tells her that if she wants Kate, she is going to kill him, the real him.

One of Safiya’s army makes a visit to Mary and Luke and tells them that their queen doesn’t like to be followed. Mary hits her over the head with a lamp and knocks her out. They go to get out of the room and the woman gets up, Julia walks in and throws a knife into her chest. Julia tells them that they found a body part, they ran the DNA, it belonged to Kate, she is dead.

Alice asks Safiya for the knife, she stabs Ocean, but before she does, she tells him that she doesn’t want to kill Kate anymore. Safiya looks down at Ocean and smiles, Alice tells her to bring her to Kate.

Alice is brought into a cell, Safiya tells her that she never had her sister. She tells her minions to get Alice off her island.

Ocean is back to life, Safiya gives him some desert rose and tells him that he has his life back. She tells him that she wanted him to see that Alice never had feelings for him. Safiya then reveals that it was Tatiana who did everything, get Alice back in her life, she stabs her.

Meanwhile, Alice breaks loose from the minions. They were holding a torch, Alice throws into the desert rose plats and sets it all on fire. Safiya sees it burning and cries. Sophie sees it as well, batwoman is there lying by a rock, she tells Sophie it is too late and Kate is not there, Safiya lied, Kate was never on that island.

The feed is back on, Mary and Luke see the desert rose to burn. Ryan is getting sicker, she tells Sophie she doesn’t have much time, just a few hours and she wants to die alone. Sophie lays down beside her and tells her she is sorry they got off on the wrong foot, she doesn’t deserve this.

Luke calls Sophie, he tells her that she needs to get batwoman back to Gotham now, he has a cure. Then we see the plant that Ryan had, a rose has bloomed.