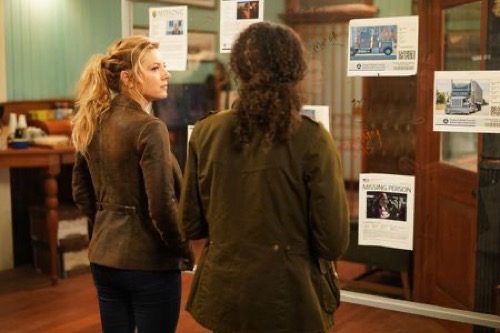 Tonight on ABC their new thriller by David E. Kelley, Big Sky premieres with an all-new Tuesday, January 26, 2021 episode and we have your Big Sky recap below.  On tonight’s Big Sky season 1 episode 6 Winter Premiere ‘The Wolves Are Always Out for Blood,’ as per the ABC synopsis, “After Jenny and Cassie learn the truth about Cody’s fate, they decide to officially team up to track down Ronald. Elsewhere, Merrilee grapples with the fact that she didn’t truly know her husband, while Helen learns more about her son’s recent activities.”

In tonight’s episode of Big Sky we continue where we left off in the last episode, where Cassie shot Legarski in the head. She sees the three women tied up and tells them they are safe now. The women are outside being attended to by ambulance and emergency personnel. Cassie tells Tubb that there is another one out there, the girls say he is a trucker. Tubb says before they get to that, he wants to know what happened in there.

She says Legarski had a gun and said on five he was going to shoot her, so on four, she shot him. Jenny shows up, Tubb asks for Cassie’s gun and then says his guys have it from there. He asks Cassie how she knows it is a trucker, she says it is what the girls said.

Ronald pulls up near the bar, sees everything and tells himself to just breathe as he drives by. Meanwhile, Legarski is in the hospital, they are losing him, he is flat lining, just as his wife walks in frantic and says she is his wife.

Cassie and Jenny are on the scene of where they find her husband’s pickup truck, Cody is inside. Jenny screams and falls to the ground. Cassie is crying. On the news, it is announced that the body of Cody Hoyt was found and a Montana state trooper has been shot in connection to the kidnapping. Also, there is a manhunt underway for a long-haul trucker who was working with the trooper.

Ronald is with his mother Helen, and he tells her only the trooper knew about his involvement and he didn’t tell anyone else. She asks how can he be so sure. He tells her that he needs to concentrate and she can’t disrupt his focus. Ronald says the girls can identify him, so he is under a little stress.

Cassie visits Danielle and Grace in the hospital. Danielle says they heard about Cody, they are so sorry. Cassie tells them the sketch artist is coming up with a profile for the other man involved. Grace says he didn’t come off as a phsycho, he came off as vulnerable. Cassie leaves the room and sees Legarski’s wife, Merrilee, Cassie looks like she is going to pass out.

Merrilee and Cassie sit down, Cassie tells her the girls identified her husband as their captor and she knows how hard this must be for her. Cassie says she just shot somebody. Merrilee says she feels responsible, for some of this. They spent their days not noticing each other, day after day. Imagine her capacity to not see somebody for who they really are.

Jenny is planning a service for Cody, something small, somewhat celebratory because that is something that he would have wanted.

Tubb tells Cassie that he dropped the ball and he is sorry. And, getting the other guy cannot be her focus. He asks her if they should postpone this. She says no. She recounts what happened, he counted to five and she kept telling to drop the gun and he wouldn’t. He asks if she saw him raise his weapon, she says she shot him at four, he said he would shoot her at five. It was him or her.

Merrilee gets a call from Mitchell, aka Ronald, he gives her his condolences and asks if he will recover. She says she doesn’t know and she is hanging up. Helen asks Ronald how Legarski is, he says he is not dead.

Jenny is at the hospital, she is working on trying to find Legarski’s partner. Denise walks in and tells Jenny that she really shouldn’t be there.

At Legarski’s house, Tubb is there with a team and tearing up the floors and anything else they can to see if he was hiding anything in the house. Meanwhile, Ronald is spray painting his yellow rig blue, he puts the licence plate in a vat of acid and makes himself a new plate.

Merrilee is with Legardski, the nurse says that God is looking out for him, he is still around. The nurse asks what kind of music he likes, it helps with brain injuries, she says “High Hopes” by Frank Sinatra, her husband was a dork.

Jenny goes to see Jerrie and asks how she is doing. She says considering, she is doing ok. Jenny says she knows she has been debriefed by the cops, she is a private investigator and she wants to find the other guy. Jerrie says whatever she needs, she will give it to her. Meanwhile, Ronald is outside and taking pictures.

Legarski is in his hospital, Merrillee is sitting near him in a chair and High Hopes is playing. Jenny drops by to see her, Merrillee tells her it is not a good time. Then she says she just doesn’t know what to say, she can’t make it better, but she is sorry for the loss of her husband.

Ronald returns home and finds his mother watching the news, she is worried, they are searching Legarski’s house. Ronald says he has a safe room, in his bedroom and he needs to get in there. Then, Ronald envisions himself strangling his mother – but he doesn’t. He tells her that they can’t get his name, which means he has to get into that house, and he will.

Time for Cody’s funeral, Jenny is walking with his ashes, friends and family are there, as well as Cassie. She takes the ashes and throws them into the air, then a whole group of men shoot up to the sky. Later, there is a get-together with everyone in a hall. Jenny says that Cody was like a wild mustang, a rascal and a great father.

Merrilee is at home, in her bedroom, the floor is torn up, things are thrown on her bed, including broken picture frames. Then, Ronald shows up at her house while she is calling the ICU. She hears dogs barking and what she thinks is someone walking outside, she hangs up the phone.

Cassie tells Jenny that she doesn’t know how to be with her, Cassie says there isn’t a script out there for the two of them. Cassie tells her not to push everyone away. Grace walks up and asks Cassie if there is any news, she says no and she just wants her to get better. Grace says she can work with the sketch artist again, she is sure she can do better. Then, Jenny sings Cody’s favorite song while she tries to keep it together, Cassie goes up to the stage and sings it with her, Jerrie joins them.

Cassie is at the office making notes, Jenny walks in and says she reminds her of her. Cassie tells her Grace is coming in, Jenny reminds her that Tubb said they should stay out of it. Jenny thanks Cassie, and tells her that she never thought it would be her to help her get through this. Cassie tells her to help her, she can’t make a go of this place, she needs a partner, she knows the work and as far as she is concerned, they still have an opened case. Jenny says the trucker’s rig was customized, Jerrie told her.

Jerrie is walking and she sees Ronald, she starts running and he runs after her. It is actually not Ronald, it is Jimmy and he says he just wanted to know if she was ok, she says she’ll be ok. He says she can still talk to him, she says those days over but thanks for checking on her. Jerrie arrives at her door and there is a note that says, “you don’t learn.”

In the hospital, Legarski opens his eyes.