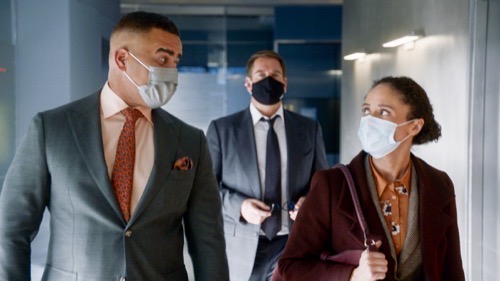 Tonight on CBS their drama Bull inspired by Dr. Phil McGraw airs with an all-new January 18, 2021, episode and we have your Bull recap below.  On tonight’s Bull season 5 episode 6 called, “To Save a Life,” as per the CBS synopsis, “An emergency room doctor is sued for malpractice after she ignored direct orders to save one near-death patient in favor of helping another who was also critically injured.”

There was a mass casualty event. There was a shooting. There were over a hundred victims from this one shooting and so it was bad. The closest hospital couldn’t handle that many patients at one time. They had to call in doctors on their day off and one of those doctors was Dr. Kinsey. Kinsey was a former military medic turned doctor. She was used to handling trauma patients and so she took what happened in her stride.

She arrived at the hospital where she was told to rush one patient in particular into surgery, but she chose to perform a procedure called REBOA which gave her time to work on another patient and it was to act as a stopgap. It wasn’t there in place of actual surgery. It was just to keep the patient holding on as she treated others and it worked for an hour.

Then the patient died. Ryan Watkins died. The blame naturally fell on Kinsey because she didn’t rush him into surgery as she had been ordered and instead she had performed a radical procedure. The REBOA wasn’t a well-known stateside. Kinsey knew about it from her time in the military and she’s performed countless times to various degrees of success. The hospital didn’t really know about the procedure.

The nurse that assisted Kinsey had to be talked through it and the nurse had doubted her. The hospital had even doubted Kinsey’s conduct that day. It truly wasn’t surprising that what happened that day got out and that now Ryan’s family issuing. They’re suing because they believe Ryan shouldn’t have died that day.

Kinsey was facing medical malpractice. She needed all the help she could get to save her medical license and so she selected TAC based on her research. She saw how successful they were. She also read an article on how great their lawyer was and so she wasn’t happy when she was given Chunk. Chunk recently qualified as a lawyer. He was the new kid in the field and Kinsey didn’t like that.

She wanted Benny. She was talked out of choosing Benny by Bull who said Chunk would do a better job. Chunk has never tried medical malpractice before and his newness would help them in the here and now. He could better talk to the jury. He could break things down for them and they did go on to choose a great jury.

They looked for a jury who understood impossible situations. If Kinsey had performed surgery like she had been asked to, she could have lost two patients and not one. She took a risk because she was doing her best to preserve life. This was explained to the jury and they seem to have understood it. However, there was a problem with the people called upon to testify. Kinsey had performed a different radical procedure that the hospital wasn’t used to and again the patient died.
It soon became clear that she liked taking risks. She didn’t just do them during an impossible situation and so that put Chunk on the backfoot. He had been warned by Benny to stay scared because it would keep him sharp and he didn’t do it. He let down his guard.

The next day at court, Bull asked Benny to join him in the gallery. They wanted to make sure they weren’t surprised like they were when Dr. Park testified and unfortunately they were. The second doctor on the stand had treated a patient after Kinsey performed the REBOA on him. This second doctor claimed that the REBOA killed him and so Bull told Chunk to ask for a recess.

Only Chunk didn’t ask for one. He went right in to question the new doctor and he got her to admit that without the REBOA the patient would have died within five minutes. And thanks to Kinsey, the patient lived for a further five days and his family got to say goodbye to him. And so Chunk was able to turn things around.

Chunk helped his client. He just happened to do as he was ticking off Bull. Bull is in charge and he expects his lawyers to take their cue from him. If he asks for a short recess, he wants the short recess. Bull later said in the car that he would do it himself if he could and so he didn’t need Chunk going rogue or Benny running for office. That last part was official now.

Benny was running for District Attorney and Bull secretly hates it because he doesn’t like not being in control. Bull was a control freak. The next time he asked Chunk to ask for a short recess, they got that short recess. They had needed it too. The nurse that worked with Kinsey that day had gone up on the witness stand and she claimed she told Kinsey that Ryan was possibly the shooter.

This nurse was lying. She was a fan of Dr. Park’s and she had tried to warn Park that the patient wasn’t being rushed into surgery, but Kinsey told her that if she took a step away from the patient that she would be fired and so the nurse’s testimony was payback. The only way to fight it was to put Kinsey on the stand. They had Kinsey talk about that night and they asked her how many she saved. She saved at least five people that night. She also lost one and its that one person that everyone is remembering. And so the team were working on their closing statements when they found a piece of information about Dr. Park.

Dr. Park had been Kinsey’s superior. He had her treat Ryan while he was performing surgery and it turns out that surgery involved Dr. Park’s goddaughter. The goddaughter was also the daughter of the nurse. Which explained why the nurse lied about that night. Dr. Park rushed a friend into surgery for a shoulder wound when Ryan’s case should have been first and so if there was a mistake made that night – it was Dr. Park’s mistake. He could have saved Ryan.

Chunk did a great job in court because their side won, but he had needed to talk to Benny about Bull doubting him and Benny said it wasn’t personal. Bull is a smart guy. He surrounds himself with other smart people and so Chunk shouldn’t doubt himself so much because no one else is doing it.