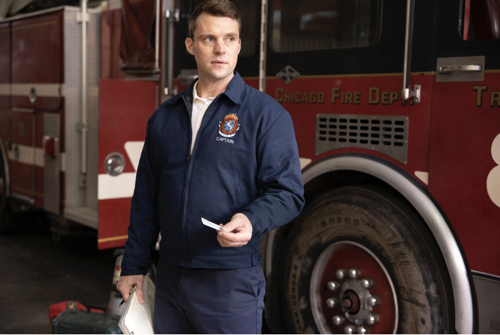 Gallo is forced to make a surprise rescue to one of their own when the firehouse is called to the site of a construction explosion; Mouch reignites an old feud.”

Tonight’s Chicago Fire season 9 episode 4 looks like it is going to be great and you won’t want to miss it.   While you’re waiting for our recap make sure to check out all our Chicago Fire recaps, news, spoilers & more, right here!

Kelly is coming out of the shower and gets dressed and sees Kidd, she asks if he can train with her later, he says if he has time. Chief Boden is called out to check out all the condemned building int their district and Severide asks if he can tag along. Boden tells Casey to hold the fort until he comes back, he says ok to Severide to join him. Kidd sees them leave and finds out that Severide is tagging along.

The siren goes off, there is an accident, a mobile billboard fell on a car and a woman is inside. Casey tries to calm the victim while Mouch tries to cut the power to the billboard. Casey asks her name, it is Sidney, ironically she works for the company on the billboard. Casey gets her out of the vehicle, while Brett is examining the driver of the truck, but he is ok. Mouch is cleaning up broken glass on the road when another fire truck shows up and Chuck Rutledge comes out, eating donuts. Mouch tells her that he is good at eating donuts, Rutledge tells him that he is a good janitor. Brett tells Ranger that they look like they have a history.

Boden and Severide are boarding up a building, they talk about their fathers and how it is funny about the things that remind them of them. Severide tells him not to get all sappy on him.

Mouch is back at the station, Kidd asks him what is up with him and Rutledge. They worked together back at 55, there was a lazy boy, green leather reclining and everyone knew it was Mouch’s chair. Rutledge sat in it and Mouch pranked him, it looked like he wet himself. It just escalated from there.

Boden and Severide arrive in a building, where it was boarded up, but someone has removed the boards. Boden goes inside and shouts hello, they see someone upstairs and he says, “don’t.” Boden tells him that the building is condemned and not safe to be inside. The man is upset, says he is supposed to be there. All of a sudden, the stairs give in and the man falls through. Boden and Severide get him out. When asked his name by the ambulance personnel, he says 24198.

We see Kidd, she is practicing while Brett checks her time. Sidney, from the billboard accident stops by, she was let out of the hospital and wants to see the firefighter that saved her, Casey. Brett tells her he is inside. Sidney goes inside and gives him her card, if she is not seeing someone. He looks at Brett, but says no, he is not seeing anyone. She says if he has nothing to do on the weekend, they can do nothing together in a socially distanced way.

Ranger asks Casey about Brett, how does she feel about firefighters. Ranger asks if she is seeing anyone, Casey says no. Mouch changes the “O” in Engine 40 to a donut on the outside of the firehouse, Rutledge sees it and doesn’t find it funny.

Boden and Severide are at the hospital, they find out that the hospital has no missing person that fits his description, he will just go the psych ward as a John Doe. Over lunch, Boden says something is up with those numbers the guy gave him, he looked at him like he could help him. He is going back to the house, he needs to board it up anyway. Severide insists on going back with him.

Mouch post the photo of Rutledge on social media, it is going crazy. Meanwhile, Kidd is at the bar, she tells Brett that Severide is MIA and she just wants to know that he has her back. Brett looks over and sees Ranger, she tells Kidd they met on a call last shift, that is it. Casey is at the bar too and sees Brett talking to Ranger, and he orders a stronger drink.

At the house, Severide and Boden are boarding it up, he asks Severide about Kidd, he says he is keeping out of it. Severide finds a cap on the floor, it is the fraternal order of police. Boden says 24198 was his badge number.

People start walking into the station and ask for their free donuts, they says there is a sign outside with his picture on it that says there are free donuts from him inside.

True does some digging and finds out that the man Boden found is Leutenant Henry Sidwell, retired in 1995. She says his wife is picking him up this afternoon.

Mouch is looking for a way to get back at Rutledge. Kidd sees Severide and rushes over to him, she asks him what is going on, he hasn’t talk to her in days, bailing on her to study and avoiding her. He says she doesn’t need his help.

Henry’s wife is at the hospital to pick him up, she thanks Boden and Severide and tells them that the house they found him in, was there first home. She has thought about a nursing home, but COVID hit, and this is a full time job. She puts fresh sheets on the bed, and he is gone. Boden gives Henry his cap back. Boden tells her that if she needs any help, she can call day or night. Severide tells Boden that was a good thing he did.

Mouch shows up with Casey and Kidd at station 40 and drops two weeks worth of day old donuts for Rutledge to clean up. 81 gets a call and has to go. They arrive on the scene of a construction accident. One by one bring out survivors and one man says there is going to be another blast over where Mackey is trying to rescue someone. The blast goes off, Mackey is ok, Gallo ran to help her and threw himself over her to avoid her from getting hurt.

Back at the station, Cruz thanks Gallo for having Mackey’s back. Gallo asks if that changes the whole “off limits” thing. Cruz smiles and says no.

Rutledge has struck again, it is raining donuts outside of 81, he had them dropped from a helicopter.

Mouch waves a white flag, Rutledge shouts victory and leaves. Meanwhile, Boden and Severide are enjoying a beer and Boden says he has been married long enough to know when someone is avoiding going home. Severide asks what he should do, Boden tells him to go home. Boden gets a call, he leaves.

Kidd is crashing at Brett’s house, the two are enjoying a glass of wine. Meanwhile, Severide arrives home to find that Kidd is not there.
Boden is sitting outside Henry’s old house when Henry walks up. He tells him that his father had a hat just like his and the two of them could have served together. He says all he has left are memories of his dad and he knows this house is special to him, but he can’t come back here anymore his wife is worried about him. Boden puts out his hand, Henry takes it, he says he is taking him home. Henry takes off his hat and gives it to Boden, he tells him as a reminder.