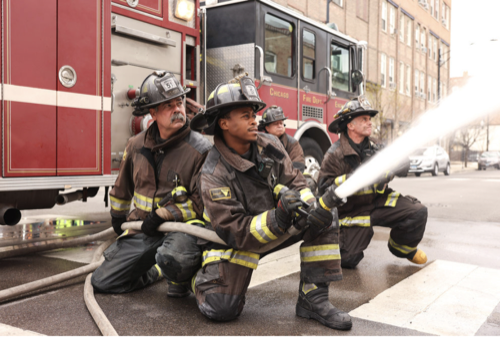 Tonight’s Chicago Fire season 9 episode 14 looks like it is going to be great and you won’t want to miss it.   While you’re waiting for our recap make sure to check out all our Chicago Fire recaps, news, spoilers & more, right here!

In tonight’s Chicago Fire recap, the episode begins with Kidd, she is in her lieutenant’s exam. Meanwhile, Casey and Severide are walking towards the station and Casey tells him he is quiet. Severide says he is just thinking about Kidd, she is probably on the written part now. Casey says she is going to knock it out of the park.

Gallo and Ritter are collecting items for the garage sale. Chief Boden comes in and says he doesn’t want a repeat of 2017, the siren goes off. The team responds to a fire at a pet food factory. A man is inside and he shouts that his wife is inside, and he doesn’t want to be saved until she is, she is in the office on the third floor. Casey tells Mouch to get the ladder up to the third floor. They get everyone out from the second floor and Mouch says he needs five minutes.

Gallo tells the captain that he can get there, Casey tells him to go ahead. Gallo puts a ladder against the building while the man says his wife who is still trapped on the third floor, her name is Jess. Floor by floor Gallo climbs up with the one ladder, he makes inside and locates the victim.

Gallo drags her to the window, Mouch has got the ladder up and Casey is almost to the top to help. Gallo says it is getting hot in there. Casey and Gallo have the victim, they put her on a stretcher and pull her out. Violet and Brett rush to help Jess, she has a pulse. Her husband, Pete, keeps calling out for her, Brett tells him to get in the ambulance and go with them to med. The team hoses down the building.

Severide tells Casey that Pete wanted him to leave him there and go save his wife instead, Casey says that is devotion. Severide keeps thinking about Kidd, Casey says he looks more nervous than she did. Severide says it is about what comes next, he wants to talk to her about getting married. She always said she would never get married again, so he wants to put it out there and see where she is at. Kidd walks up, she says she has no idea how she did.

Casey notices one of the fire jackets has a chemical burn on it. Herrmann shouts out for everyone to go shower right now and Casey is wondering what was in that factory. Violet says her guess is sulfuric acid. Boden tells Casey and Severide that no hazardous materials were used on site. Casey and Severide decide to drop by the warehouse to take a look around. They find Pete there, he says his wife isn’t doing good. They go outside and around the building, there is a barrel of sulfuric acid. Pete says the city won’t clean this lot up, they have complained and people keep dumping things there.

Severide and Casey are enjoying a beer together, Severide asks him if he is going to tell Brett, you know what. Severide gets a message, they found a truck six blocks from the loft that is big enough to carry the barrels, the two head out.

Casey and Severide find the owner of the pickup, he says if he wants something dumped it will have to wait until tomorrow. The guy says he is just trying to feed his family, he picks up these little jobs from an app. He does a dozen jobs a day, he doesn’t remember. It came from a garden company, Pots & Plants. Brett and Kidd are there, Brett has the cat with her because the place is being fumigated, Casey tells she can put her in his office. Outside the fire station, the garage sale has begun.

Casey and Severide stop by Pots & Plants, says they want to talk about their fertilizer. The owner says all the ingredients are organic and eco-friendly. His assistant buzzes him for a meeting, he excuses himself.

Gallo tells Ritter that the garage sale was so stressful, they are glad to turn it over to Mouch for a couple of hours. All of a sudden, there is a commotion in Casey’s office, Brett took her out of the pet carrier. Boden walks in and asks what that ruckus is, the alarm goes off and both Brett and Violet have to go. Boden turns to Gallo and Ritter, he tells them to coral that animal and keep it outside.

The call is from a dentist’s office, a man is stuck, something is logged in his mouth. The dental assistant used the wrong product when she went to do the dental mold.

Mouch is running the garage sale, and he is doing a good job. Gallo and Ritter come out to give the cat some water, only to find out that Mouch sold the pet carrier with the cat inside.

Casey and Severide stop by the hospital to see Pete, his wife has yet to wake up. They tell Pete about Pots & Plants, they can’t get a warrant to go after the plant guy without the driver and he won’t say anything, and even if he does, the plant guy will probably just get a fine because he wasn’t the one to dump it.

At the garage sale, Ritter tells Mouch that he was a force except for selling the cat. Brett overhears, she tells Ritter that she has been wanting this, something to take away that evil cat. A man walks up, he hands Mouch an envelope, he is getting the firefighters award of valor for saving a girl in a fire.

Severide and Casey are outside Pots & Plants, Herrmann drives up, undercover in a pickup, and says he is there to pick up a barrel, but the owner doesn’t buy it. All of a sudden, Pete drives up and he hits the owner. Casey and Severide go inside the property and Severide finds a cabinet with a lock on it, he breaks it and finds the barrels. Casey tells the owner to feel free to call the police and save them the trouble.

Pete’s wife came out of the coma, he thanks Casey and Severide for pulling off the owner.

Boden comes into the bar, headquarters called, she passed.