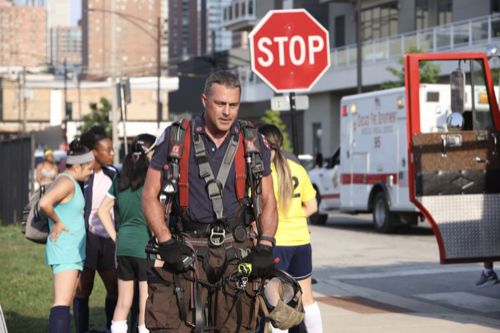 Chicago Fire begins tonight with Kelly Severide (Taylor Kinney) comes into the kitchen where both Stella Kidd (Miranda Rae Mayo) and Matthew Casey (Jesse Spencer) tell him to be quiet as Griffin Darden (Cameron Scott Roberts) is crashed on the couch. They all quietly sneak out of the apartment and let him sleep.

Deputy District Chief Wallace Boden (Eamonn Walker) is speaking to Firehouse 4, nobody seems to enthusiastic about him being there. Meanwhile, Stella and Christopher Herrmann (David Eigenberg) are doing pushups, competing while Randall Mouch McHolland (Christian Stolte) announces the results; clearly the team spirit is still existent there. Severide asking Blake Gallo (Alberto Rosende) how long this has been going on. Gallo questions Kelly about alternative solutions, who is impressed and tells him if he ever wants to try for the squad to come to talk to him. Casey calls it that Stella won and says if he is playing for Chief he cannot play favorites; suddenly Squad 3 is called out.

A young girl had chased a ball and fallen into an open manhole. They place a ladder over the hole, lowering Joe Cruz (Joe Minoso) to help her, causing him to have a panic attack partially way down. They quickly hoist him back up, Kelly unhooking him and hooking himself up, going after Grace himself. He orders her to grab his hand and he is able to grab her, just as she loses grip of the pipe. Once above ground, she hugs him and Joe apologizes to Severide who ignores his apology and orders the guys to cover it up.

Back at 51, Griffin listens to stories from Herrmann and Mouch about his dad; everyone commenting on how he was one of a kind. Boden asks Griffin to tell his mom and Ben hello. Kelly calls Cruz over, saying he is relieving as he lied to his face last shift. He only has a 4 man team and he cannot have this. Cruz storms off as Gallo wants to question him about transitioning from Truck to Squad; Cruz tells him to do him a favor and wait until his body is cold; Gallo looks hurt and confused.

Sylvie Brett (Kara Killmer) is on the phone with Charlotte, saying Chief Evan Hawkins (Jimmy Nicholas) specifically told her to get this appointment on the books, it was urgent and she could make it happen. Brett is happy that she gets the meeting, as Stella is surprised as Hawkins is the guy who tried to get her suspended. Kidd and Mouch make fun of Sylvie sweating but agree to listen to her pitch. Violet Mikami (Hanako Greensmith) sits with Darren Ritter (Daniel Kyri) and Gallo, discussing their microbrewery when Herrmann overhears and says he will taste their beer and may sell it if he likes it.

Griffin walks over to Matt’s office, saying it is cool being in Dad’s firehouse and there are a million other stories to hear. Griffin says this is the reason he came to Chicago but there is one more story he wants to hear; the one about how his dad died. He only hears that his dad was one, but the death feels like a mystery, something that was kept from him his whole life. Matt says it was a terrible fire and something that took away his best friend; Griffin still wants to hear it so Matt takes him for a ride.

Sylvie deeply believes in the program and her passion is evident but now is not the right moment as per Hawkins. He asks her to bring it to him again next year but she feels that Chicago needs it now, but he still declines; even though he apologizes.

At Molly’s, Herrmann says they have a fine beer but they admit they are making it in Gallo’s kitchen. Herrmann gives them a card of a person who will help them meet the supply and demands of their future customers.

Matt brings Griffin to the house where the fire happened that his father died. He explains how he sent Andy through the window not knowing they had not vented the fire. Both Matt and Griffin mourn for Andy outside the house as Matt apologizes over and over, both admitting how much they miss him every day.

Violet and Ritter meet with Charles, who is extremely drunk; both well-dressed for a business meeting. A little while later, they are informed that he would like to offer them space to produce their brew. They learn the only reason he has his business is that his dad is a multi-millionaire. Herrmann thinks Gallo got stood up, who says he was supposed to meet Cruz after learning what happened earlier in the day. Herrmann says he sure has the ego for the squad and if he is serious about it, Cruz is the one to talk to but it sounds like he is going through something right now.

Sylvie is explaining to Matt how bad her day went and he feels that Hawkins is making a mistake. She comments on how great a kid Griffin is. She swaps places with Severide and Stella to play basketball. Matt voices concern that Kelly hasn’t spoken to Cruz and explains how he stayed on with his head injury thanks to Brett never leaving his side. Casey reminds him that Kelly is his Lt and he needs to be there so Cruz isn’t feeling alone.

Cruz walks to Molly’s but he doesn’t walk in.

Violet learns from Sylvie that Hawkins turned her down, but they can’t talk as they get a call and immediately rush off and learn that the other ambulance was delayed. Their patient is laying on the ground with a huge gash on his side and his stats are crashing, Violet wants to chase his friend but there is no time. Sylvie is able to bag him but they have to start compressions; they are getting no reaction and his phone is ringing and it saying “Mom”. Both are frustrated as Sylvie throws her medical gear and the young man doesn’t make it.

Gallo comes to Matt’s office, learning that he has been gunning for the squad and everyone knew but Matt. Matt thinks it is a great idea and he should start studying for it but he wants to stay on 81. He is interested in the squad and it would be cool to end up there eventually but he has a lot to learn right now from Matt. Sylvie comes in and just leans into Matt’s hug.

Violet tells Gallo and Ritter that they need to give up a 10th of their product to this Charles guy but she wants to go to Gallo’s to talk about it as she needs to get away from the firehouse after a rough day. Much comes to the locker room, hearing a loud bang and finding Sylvie very upset. She says the locker, the bag, CFD, everything is broken. She announces if Hawkins was on any of these calls he would agree to this. Mouch feels once these people get their white shirts they forget what it’s like to be on the ground. He zips up her bag as she promises not to give up; giving Mouch a moment to think about things.

Kelly finds Cruz at home, telling him to meet him at the Fire Academy at 4 pm and he agrees. Matt walks with Griffin, who says he doesn’t want to leave but Matt says he can return any time he wants. He reminds Griffin that he will always be family as Griffin turns rather solemn, Matt wonders if he is okay. Griffin confesses that everything is a mess. His mom is back in jail for another DUI and they keep moving for a fresh start and this time she is going away for a while. Ben is going off the rails and Griffin thought if he left for a little while he could figure things out. He felt the last time they lived with Matt was the last time things were normal and now everything is going to hell and he doesn’t know what to do.

Kelly and Sylvie find out from Matt that she is on her 4th DUI and Matt feels she never recovered from Andy’s death and that is why Griffin wanted to find out about ground zero. Their aunt is supposed to be watching him and his brother, but she isn’t taking care of them and Matt feels like he has to do more.

Mouch pushes Charlotte who says she is not falling for anyone wanting to see Hawkins; who inadvertently walks in on them talking and he openly welcomes him into the office. Mouch congratulates him as they haven’t seen each other in years. Mouch says he should reconsider Sylvie’s paramedicine plan. Hawkins feels they should look at it down the line as Mouch says that is a cop-out and this is not how his father would run things and stop the timing and politics stuff. His dad would have pounced on this idea and dealt with the fallout later.

Violet makes fun of Herrmann and then drunkenly talks about they cannot be like Charles and have a future like him.

Cruz is working hard at the Academy training facility, he is out of breath but it feels like he is stepping into his favorite air jordans. Severide is very proud of him and they repeat the drills over and over again.

Matt stands with Griffin as he waits for his ride. He thanks Matt for listening, the couch, and the money. Matt says he is planning on coming to see him and Ben as soon as he gets his furlough approved and tying up loose ends. Griffin back peddles and Matt takes his phone away, asking if he ever lied to him, promising not to turn his back on the boys. They hug as he rides arrives.