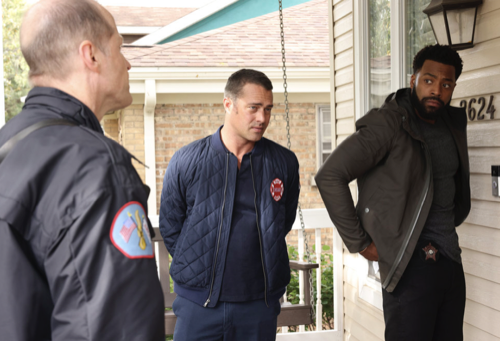 Tonight’s Chicago Fire season 10 episode 4 looks like it is going to be great and you won’t want to miss it.   While you’re waiting for our recap make sure to check out all our Chicago Fire recaps, news, spoilers & more, right here!

In tonight’s Chicago Fire, the hunt for the arsonist has increased. Firefighter Severide and Fire Investigator Seager were the two investigators first on the case. They were onto the arsonist back when the only thing he burned down was the church. The arsonist has since tried to kill the priest by setting him on fire and it was Severide who saved the priest’s life.

But the priest was placed in a coma afterwards. He couldn’t reveal who tried to kill him nor could he offer any more hints about what he may or may not have heard in confession and so the two investigators were back at square one. They decided to look again at the church fire. They were doing so as a floater was brought in to replace Severide at his station and the floater was Lieutenant Jason Pelham or Pelham for short. Pelham seemed like a good guy and he expected everyone to do the job they were sent.

Pelham and the others got called out on their first job together. Pelham gave everyone a task and Gallo didn’t follow it. He therefore messed up. Gallo didn’t know how he did it or why. He was used to getting a certain amount of latitude from Casey and so he found out that Pelham is very different.

When he gives an order, he expects it to be followed exactly. He later took Gallo to task for failing to follow up to his orders and he implied it shouldn’t be repeated. Gallo was uncomfortable around Pelham after that and Mouch could see it. Mouch also overheard Pelham yelling at Gallo. He didn’t say anything because he it wasn’t his place. He also couldn’t get Gallo to talk because Gallo didn’t want to discuss with anyone. Not even his friends.

Her amazing program to help troubled girls with a firefighter program and, while she was away, Boden didn’t want a revolving door of floaters. Boden wanted to keep Pelham and Mouch actually liked Pelham. Pelham was a good guy. He just got off on a bad foot with Gallo and now Gallo was hiding from him. Gallo and his friends had opened a micro-brewery. And his friends wanted to sell their beer at an even called “Winterfest”.

They thought they should use their connections to help sell. Gallo was told to call Cara and he jumped right on it. He’s been talking to Cara a lot recently. She was interested in him and he seemed interested as well. He just was taking her up on the offer for some reason. Anyways, they’ve been texting and Violet had been jealous to hear that. She tried to downplay it like she wasn’t jealous and Ritter saw right through her.

Ritter was still silently judging her when they got a call about a new fire at a new church. Boden called in everyone when he heard it. Only for that fire to be a prank call and so they rang the bells and whistles for nothing. Severide had even been called. He and Seager responded to the fire to find out it was nothing, but they were on the right path. They learned that their arsonist was targeting progressive churches.

They found out that the archdiocese was investigating Father Anthony because someone called in to accuse him of turning the church into something “woke”. Father Anthony was part of a big push to bring the Catholic Church into the new century and he and other parishes have been targeted for this reason. Father Anthony later died of his wounds.

This arson investigation became a murder case and to make matter worse there was also others churches in the area that might be targeted. So far, the arsonist had stopped at desecrating hymn books with a quote over and over. The attack on Father Anthony and his church was the first signs of violence. Father Anthony tried to get the investigators to speak with a nun and so they went back to her. They asked her some questions and they learned that she had relieved the groundskeeper.

The groundskeeper was one of the hardliners. Larry Muller cleared out all of his supplies of ammonium nitrate and he attacked churches for being progressives and wanting to be there for everyone. Muller didn’t believe in all of that. He wanted to attack people for supporting churches that actually upheld the Christian faith and so Severide called it in to Chicago PD. They got a warrant for Muller’s home.

He lives with his mother and he apparently hated anyone for trying to modernize the church. His room was pretty disturbing. It also showed signs of him building a car bomb and so everyone went back on alert when another fire alarm went off at St. Dominic. The earlier prank at hat same church had been a test run. Muller wanted to get research on how everyone reacted.

Muller wanted to force everyone out of the church in order to kill them with his car bomb. Severide warned Boden and so they were clearing out the parking lot when Muller ran to his car and set the car bomb off. He blew up himself. But he didn’t hurt anyone else. Boden moved to save a little girl in the path and Pelham impressed him by shielding him. Pelham was a good firefighter.

Boden wanted to keep him around and that was going to be a problem for Gallo because Gallo still misses Casey. Pelham did everything to be a nice guy to Gallo and Gallo ignored him because he said Casey would have done things differently. Gallo felt differently after he spoke to Brett. Brett was supposed to visit Casey when Casey’s work came up and he couldn’t meet with her. And so she was crying when Gallo saw her.

The two of them talked. They both realized that he couldn’t let Casey’s leaving hurt and they tried to move on. Gallo even decided to give Pelham a chance. Pelham was going to stay on for a month and so everything should have been find, but Hermann has his suspicions. Hermann thinks no guy as good as Pelham would have been floating for so long if there hadn’t been something wrong with him and so he warned Mouch and together they were going to keep an eye out.