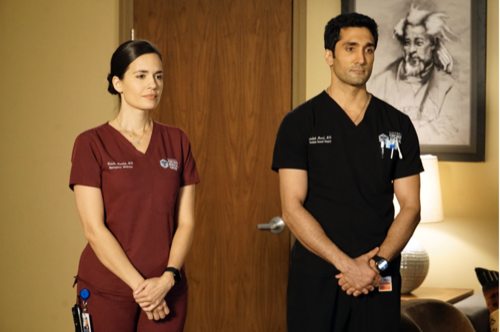 Tonight on NBC their medical drama Chicago Med airs with an all-new Wednesday, January 27, 2021, premiere episode and we have your Chicago Med recap below. In tonight’s Chicago Med season 6 episode 4 called, “In Search of Forgiveness, Not Permission,” as per the NBC synopsis, “Dr. Marcel and Dr. Manning lay everything on the line to assist a sick woman. Dr. Halstead faces an uphill battle in getting participants involved in his clinical trial. Dr. Choi clashes with a patient who demands absolute perfection of himself.”

In tonight’s episode of Chicago Med, Goodwin is back. She used to have to work from home because she has a precondition. She has diabetes and she needed to take precautions because of it. However, that was then. This is now. The hospital’s safety protocols have held up and its now safe for people like Goodwin to return to work. She was back running the hospital. She got to see her friends in person for the first time in months and Dr. Charles was glad to see her. He needed all the help he could get. Charles has been treating patients and doctors because both sets were experiencing a Covid-19 fatigue. The people are tired. They’ve seen sickness and death on a scale neither has ever seen before.

The topic of Choi was the most concerning for Charles. Choi became the new Chief of Emergency Department and this meant he oversaw the new coronavirus department that worked inside the ED. Choi should have had doubts about decisions he made. He should have been questioning his every move now that there’s a pandemic he was fighting and surprisingly Choi was calm about it all. He was just a little too calm for Charles. Charles talked to Choi one on one. He saw that Choi wasn’t worried in the slightest. He was sure about everything and he was pushing everyone. He believed the ED could be run better.

Choi thought it should be run like the hospital where he trained while he was in the army. He was slowly turning the staff of the ED against him with his grueling demands to save time on everything and he micromanages. He told the doctors what they should be doing rather than trusting them to do their jobs. Said doctors are now blaming Choi when they lose patients because they think they could have saved them and so they’re complaining about Choi. The nurses are complaining about Choi. They were told to clean everything within ten minutes and no one can get a UV deep clean done in ten minutes. Maggie tried to warn him that they could do in fifteen, but he demanded ten.

Choi was a taskmaster. He’s also touchy about his new position because he didn’t like it when a patient tried order him around. The patient was Dr. Todd Lowry. Lowry was a plastic surgeon and he did surgeries on himself. He performed liposuction as well as abs implants on himself. He was so sure that he knew everything that he didn’t want to be transferred to the plastic surgery department to fix something that went wrong. He demanded that Choi follow his demands and fix him in the ED. Choi chose to instead pass this case onto Charles. Charles had to check to see if there was anything mentally wrong with this surgeon and in the meantime he tried to figure out why Lowry pressed Choi’s buttons.

Charles had talked to Lowry. He realized Lowry has body dysmorphia and that he needed therapy which would take time. This wasn’t good enough for Choi. Choi demanded that the hospital intervene now and he wanted to put Lowry on a psychiatric hold because he claimed Lowry was a danger to himself. Charles disagreed. He didn’t think they should take drastic steps with the patient and he wondered why Choi was trying to control this like he controlled everything else. Choi was still being a tyrant at the hospital. He was doing his best to push Maggie and the other nurses into doing better, but occasionally there were signs of the man they all used to know. Like when he allowed Maggie to talk to her husband on a two minute break during shift.

Ben called Maggie because he was scared. Their foster son Auggie woke up with a temperature and he felt nauseous. His eyes also looked off. Maggie saw him through the camera and she asked Ben to bring him to the hospital. She wanted Dr. Manning to look at him for her. Only Manning was busy with another patient. A young woman came claiming she had a stomach and her stomach was cancer. She had a stomach full of cancer. The resident oncologist didn’t even think they could operate to remove the mass. The doctor suggested that they let the patient try chemotherapy and to let her go. And that wasn’t good enough for Manning because she told Crockett about it and he too wanted to perform surgery on the girl.

Both Crockett and Manning wanted to believe they could save her. They even brought her case to Goodwin and Goodwin told them they couldn’t save everyone. Goodwin also had to say the same to Maggie. Maggie’s foster son needed a new liver. He wasn’t high up on the donor’s list because his condition was currently stable and so it was going to take time for him to get one. Time, he didn’t necessarily have. Manning was able to treat him for now and that she was running back to Isabella’s case because Crockett went rogue on everyone. He took the patient into surgery in spite of what the oncologist suggested and it turns out the other doctor was correct.

The tumor was everywhere in the abdomen. Crockett opened her up and he didn’t know how to close her again much less get her kidneys to fit. He had to call Manning for help. Together they tried to fix what they started, but Dr. Gillen the oncologist found out about it and she reported them to Goodwin. Goodwin was also dealing Choi concerns about Lowry. Choi wanted to pull the other man’s license because he had body dysmorphia and Charles didn’t agree with his assessment. He thought Lowry was only a danger to himself. He also said body dysmorphia was quite reasonable and so Choi was going to let it go. And then Lowry began to open up his wounds because he didn’t like how stitches were done.

Choi had to stop Lowry from harming himself. He wanted the patient to be sedated and Charles overruled him. He got Lowry to leave his stitches alone just by talking to him. Charles handled the situation his way and still Choi wasn’t happy. Choi angrily confronted Charles afterwards by demanding things be done his way, but Charles told him he was going over the line and so Choi yelled at him that this wouldn’t be happening if he had just helped when he asked. The whole hospital was looking at Choi then and so Choi walked off in a temper. He went to the bathroom where he expressed his frustrations. And he wasn’t the only one unhappy.

Halstead couldn’t find patients for his clinical trial. He tried finding patients through the hospital and it was a no go because everyone was scared of hospitals. They didn’t want to catch the coronavirus. Halstead next tried to get a patient list from doctors and doctors were only willing to help him out if they could get a cut of the profits. Halstead first told them no. He tried to have principles and do things the right away. It was much later, once he caved, that he realized he needed to do this or there won’t be a clinical trial at all. And so Halstead gave up on his principles while Choi finally acknowledge that he does have PTSD.

Choi has been going through a lot. He’s trying to change things at the ED because that was the only things he could change and so talking to Charles again, but being honest this time, helped him to see that he was sick. His PTSD was triggered by the pandemic.

Manning and Crockett successfully removed the tumor in Isabella’s stomach and them saving her life was the only reason they weren’t fired. And afterwards the two of them had sex.

Maggie also got an idea to test Auggie’s DNA through an ancestry website because that way she can look for any relatives who might be a liver match.