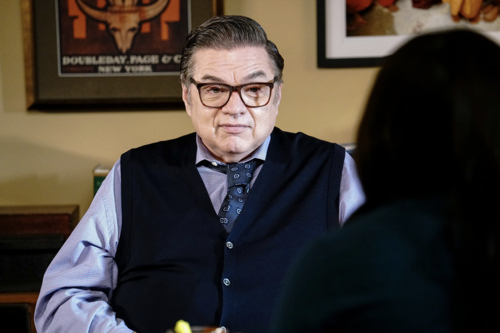 Tonight on NBC their medical drama Chicago Med airs with an all-new Wednesday, May 5, 2021, episode, and we have your Chicago Med recap below.

In tonight’s Chicago Med season 6 episode 13 called, “What a Tangled Web We Weave,” as per the NBC synopsis, “An auto accident sends Goodwin into a spiral as she tries to help a young boy and his mother; Manning’s secretive behavior begins to draw the attention of Marcel and Halstead.”

In tonight’s episode of Chicago Med, the episode begins with Natalie, she is with her mother who seems confused about her medication, Natalie reassures her and tells her it is for her heart.

Will sees Sabeena when he comes into the hospital, he tells her that he is sorry again and offers to buy her drink – she tells him that she prefers to keep things professional. A 10-year-old young boy comes into emergency, he was struck by a vehicle at 35 miles per hour, no helmet, Sharon Goodwin was the driver and Ethan tells her that he will do everything he can to save the boy. Will examines Sharon, she says she has no dizziness, no neck pain.

Will wants to do a chest x-ray to rule out anything. Daniel goes into the room; Sharon wants to speak to him alone. She tells him that she was going to meet her trainer, she was going under the speed limit, she doesn’t know where he came from. Daniel tells him that it was an accident, but he is surprised that he was out biking alone in the dark with no helmet. Sharon begs Daniel to find out what is going on with the boy. Officer Rosado comes into the room, she wants to take Sharon’s statement but tells it is not her fault, they viewed the traffic cam.

Crockett sees Natalie when she comes into the hospital, he tells her about Goodwin and the car accident. He says he was calling her earlier because he has some information regarding AICDs, he knows she and her mom have reservations about going that route, but there is some preliminary evidence that it can help and give comfort for Carol. Natalie says it sounds promising, when she has time, she will look at the literature he sent her.

Vanessa is in the hall and she meets Maggie from Chicago Med, who can’t find Becher Hall, Vanessa offers to walk her there before she goes to her lab.

Natalie asks Will if a dry cough is one of the side effects of the trial medication, he says it is – she explains that she saw one of his trial patients in ED the other day. Will asks her how her mom is doing. She says she is hanging in there, but still having palpitations. He tells her if she needs anything, just ask.

Bert drops by to see Sharon, she is so worried about the boy, she doesn’t want to talk, and she doesn’t want to go home. Sharon sees Daniel and rushes to him to get information. The boy’s name is Jake Miller, he is 10 years old, his mom is on the way in. He suffered multiple fractures and traumatic aneurism. As of a few minutes ago, they have yet to stabilize him.

Will gets a call, his clinical trial patient, Mr. Brady, his remaining allotment of medication was supposed to be returned and the pharmacist says someone picked it up. The pills were Will’s responsibility, he has to find them one way or the other.

Jake’s mother is in an emergency with his younger brother, Sam. Ethan tells Mrs. Miller about Jake’s condition, she says she bets the driver was drinking and tells Jake that the person is going to pay.

Dean and April are speaking, he tells her that he knows someone and can put a good word in for her with her studies. Just then they get a patient and have to go. Mr. Turner has trouble peeing, he tells Dean that it has been happening for a few months now. Dean gives April the orders on how he wants to treat him and send him home, April disagrees, but Dean disregards her suggestion.

Maggie goes in to see Daniel, she tells him that she has a daughter, her name is Vanessa and this morning for the first time, she met her. Maggie had her at sixteen and had to give her up. She found out that she still lives in Chicago and is going to medical school, the same field as her, what are the odds. Maggie thinks everything in the universe wanted her to meet her. Maggie claims to have got what she needed, she won’t see her again.

Sharon wants to know the treatment plan for Jake, Ethan tells her it is a conflict of interest but after Sharon gets upset, he gives in. The vessel is still leaking, he needs surgery, and there is a significant mortality risk. His mother has chosen surgery. He says the mother didn’t take the decision lightly and he is not going to push it.

Will goes to see Elaine, she came in for pain in her abdomen and he wants her to have a surgical consult. Her white count is elevated, she is running a fever, but she says if she is not dying tomorrow, she is not doing the surgery.

Ethan takes a look at Dean’s patient and he recommends the same route that April does, Dean says ok to him.

Sharon goes to see Jake, Mrs. Miller is in the room, she introduces herself and tells her that if she would go with the less invasive option, the stint, and if Jake suffers cognitive deficits, the hospital has resources to help her to take care of her son. Ethan comes in and asks Sharon for a moment, but she won’t. Sharon tells Mrs. Miller that she is the one who hit her son, she is sorry. Mrs. Miller is upset, she tells Sharon that she only came to see her cover her butt. Ethan tells Sharon to leave.

Dean and April are working on their patient when he says to her, it is nice that she and Ethan are so close, didn’t they use to date. He hands her over the instrument and tells her to take a go at it, she says she really doesn’t feel comfortable. The patient’s heart rate is dropping, she asks him to take over.

Daniel drops by to see Sharon, he tells her that he heard about her run-in with Mrs. Miller. She says she was just trying to help. He tells her that everything is still a little raw, her world is spinning right now. Sharon says he can’t die, that little boy has to make it. Daniel says as cruel as it might seem, this is not in their hands. He tells her that it is freeing to know that we are not in control. He tells her that she has people in her corner that love her.

April goes to see Dean asks her what the heck was that. He tells her that the only way to learn is in the heat of battle.

Ethan asks Daniel if Dean ever reached out to him, he is worried about him. He thinks he is holding on to some heavy baggage and is worried that he has nobody to open up to.

Crocket asks Natalie what is going on, he has been open with her, more than he has shared with anyone and it has to be a two-way street. She says that between her mom and work, she doesn’t have the bandwidth to think about anything else, she needs some space.

Dean apologizes to April for what happened earlier. Daniel walks up and asks Dean if he got a welcome package when he started, the admin is mandating these mental health checks on the person during the pandemic, he would like him to show up so they can get it on the books.

Jake’s surgery went well, with no complications, they were able to reconstruct the vessel and they expect him to make a full recovery. In investigating the accident, the police found out why Jake was alone at dark, his mother works an overnight job across town and leaves both kids alone at night. Sharon tells Ethan to hold off DCFS. Sharon goes back to see Mrs. Miller, she says she is sorry. Sharon says she knows she left her children alone last night.

She says she told Jake to stay in the house when she is gone. Sharon offers her a job on the day shift of the custodial staff if she wants. It’s not much, but she will have peace of mind knowing the kids are at school when she is at work. Mrs. Miller thanks her, Jake wakes up and calls for his mom.