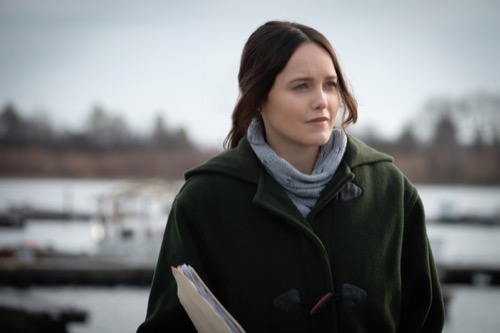 Tonight on CBS Clarice returns with an all-new Thursday, February 25, 2021 episode and we have your Clarice recap below.  On tonight’s Clarice season 1 episode 3 “Are You Alright?,” as per the NBC synopsis, “In order to prove to Krendler and the VICAP team that she is fit for duty, Clarice must find the psychological key that will unlock a confession from the suspect in the three river murders.”

Tonight’s Clarice season 1 episode 3 looks like it is going to be great and you won’t want to miss it. So make sure to bookmark this spot and come back from 10 PM – 11 PM ET for our Clarice recap.  While you wait for the recap make sure to check out all our Clarice recaps, spoilers, news & more!

Clarice is sitting across from a doctor and he is trying to get her to talk, she asks him if there is any doctor/patient confidentiality or this just go directly to her boss. He tells her that she is there so she can keep her job and he is the one that can help her if she lets him. He tells her that he understands that when she returned from Tennessee she went to see Rebecca at the trauma center.

We see Clarice and Rebecca who tells her that he took his mask off at one point, he didn’t care and she knew he was going to kill her. He drugged her, he wouldn’t look at her. Clarice tells her that they are interviewing her attacker tomorrow, they know he was hired by someone, but the only thing that connects him to the murders of Angela, Tess, and Sandra is her, they need her testimony. Rebecca tells her to find the ones that hired him and she will testify.

Clarice tells her that she has to go interview a suspect. The suspect is there, Krendler comes in to tell the team, his name is Karl Wellig, he has served in the military and waived his right for an attorney, which is pretty bold since he killed three women and tried to kill Rebecca Clark Sherman. He asked for a deal. Clarice tells Krendler she is sure that Wellig was hired, she spoke to Rebecca last night and she can tie all the victims to drug clinical trial. She will go on trial if they find out who hired Wellig.

Krendler tells Clarice that she is with him, he asks her for the deal. He says he is a handyman, he was fixing a lady’s dishwasher when a bunch of feds burst in, no warnings, weapons drawn and he got scared. He looks at Clarice and says he never told her that he wanted a deal and he didn’t kill anybody.

Outside the room, Clarice tells Krendler she knows what she heard. Shaan sees a tattoo on his forearm, SS, Scout Sniper. Clarice says he is a shark, he has the same dead eyes. Krendler tells Clarice to check the DNA on the bite marks of the victims and see if there is a match.

Clarice asks Wellig why he changed his mind about the deal, he says it never happened. Clarice tells Ardella that Wellig recounted on the deal, called her a liar and now Krendler and the team are looking at her sideways.

We see Catherine exercising when Ruth arrives home. At the bureau, Krendler tells VICAP they need to close for serial murder today, get creative. Clarice is back, she says Wellig might have a strict moral code, especially where it concerns women. Rebecca says she wouldn’t look at her when she was undressing and he wouldn’t look at Clarice when she touched his mouth to take a mold of his teeth. Krendler tells Tomas to go in with him and play bad cop. Krendler tells Wellig that his bite matches the bite of the three victims. Tomas asks Wellig if the women laughed at him, did it start overseas. Krendler sends Tomas out. Meanwhile, Wellig’s lawyer arrives. Krendler asks Wellig if he knows what they do to rapists in prison. Wellig tells Krendler that he has no evidence of all. Claice is watching and says Wellig is not scared at the at all. Meanwhile, Wellig tells Krendler to shove his deal, he didn’t kill anyone.

Ruth offers to cook for Catherine, she says no. Then Catherine asks for more pee pads for her dog, Ruth tells her to take the dog out, she will go with her. Catherine slams her bedroom door and says she will just keep her in her room.

Clarice is on the phone with Ardelia, she has bad news. Welligs teeth are no match for the bite marks on the victims. He definitely didn’t bite them and there is no DNA. Tomas goes back in the room and brings lunch to Wellig. He tells him he is sorry that before he got out of hand. Tomas tells him that they are both brothers because they both served. Tomas starts telling him a story about when he was in service in Panama and he kind of misses it.

Krendler goes in the room and tells Wellig his lawyer is there, Wellig says he doesn’t need one. Clarice sees Wellig blink and his voice pitched higher. Meanwhile, Shaan is trying to detain the lawyer and asks to see his ID, the guy gets up and runs. Shaan runs after him, but too late, he gets away. Clarice is looking at the bite marks and there is something odd about them.

Shaan tells Krendler that the lawyer is gone and there is no way he was a lawyer. Murray says there is no DNA, the teeth marks don’t match. Krendler tells them to use the lawyer, Wellig is afraid of him and he doesn’t know that they lost him.

Krendler is back in with Wellig, Clarice gets a page from Ardelia, it’s important. Ardelia shows her a standard dental teaching model, it is a perfect match to the bite marks. Clarice thinks Wellig was ordered to make it look like a crazy guy did it and he did it the only way he could. He is not a serial killer. Clarice goes to see Krendler, he won’t listen to her. She smashes a cup on the floor, Krendler comes back in. She tells him about the dental teaching model and asks him to send her in.

Clarice goes in and says the offer is witness protection. She shows him the dental model and says the person who hired him told him to make it look like a mad man. She tells him that they are going to protect him, but he needs to tell them who made him to do this.

She asks him again who hired him. He says he never worked with them before, but these guys wanted details, then he drinks his rootbeer. He only got a number, but not a name. Wellig has a stroke right in front of Clarice, foam is coming out of his mouth, Krendler comes in the room, there is no pulse.

They look at security footage of the hallway, the cop who delivered the lunch was not a cop and he is seen on the footage speaking to the lawyer. Clarice tells Kreindler that if they got to Wellig, they may get to Rebecca, he tells her to go.

Clarice moves fast and then goes to find Rebecca, there is a note on her bed that reads, “I’m sorry.” Krendler calls Clarice and tells her Wellig murdered, but she was right to go on the conspiracy track, they will have to see where it goes.

Catherine is watching the hearing that Ruth attended earlier in the day. Ruth hears the dog barking, she gets the leash and takes him for a walk.

Clarice is back with the doctor and tells him that he is not very good at his job, she would like to speak to someone else. He wished her luck at finding someone else who is better at than he is.