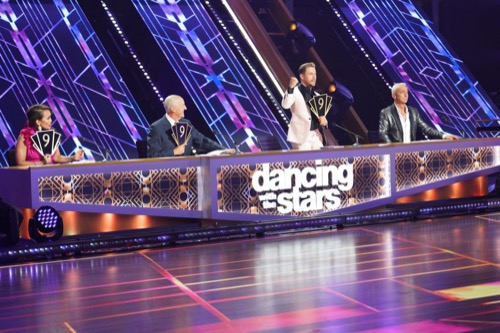 Tonight on ABC the glitz and the glimmer finally return to the ballroom as Dancing With The Stars when season 30 episode 6 of DWTS airs! We have your all-new Tuesday, October 25, 2021, season 30 episode 7 Dancing With The Stars recap below! On tonight’s DWTS Season 30 episode 7 “Horror Night,” as per the ABC synopsis, “It’s “Horror Night” on “Dancing with the Stars,” and viewers are in for a real treat as the remaining couples Monster Mash their way back to the ballroom for a fang-tastic night as they compete another week for the coveted Mirrorball Trophy.

Tyra Banks will walk out to Lil Nas X’s “MONTERO (Call Me By Your Name).” This spooktacular episode will also feature the season’s first performance from judge Derek Hough, who won an Emmy® last month for his choreography on the show.”

Judges Comments: Len: “I’ve got to say, you nailed it. It was a mix of aggression and expression. I would like a little stronger posture and something is funny about your hands. But overall, this was no nightmare, it was a really tough performance.” Derek: “I am impressed nobody pulled their eye out with your costumes. I wonder if you could stretch more, but no, it was perfect and you go full out.” Bruno: “Welcome to hell everyone, it was horrible in the best possible way. You channeled all the devilishly powerful dance with great control, your footwork was very good. Great.” Carrie Ann: “I loved it, it was so amazing. Work on your flexibility.”

Judges Comments: Judges Scores: Derek: “You have this elegant demeanor about you that is so pleasant watch and so stunning. There were a few wobbles here and there and a few extra steps. But, I am always so impressed with you, that leg extension was wow. Beautiful dance.” Bruno: “My spider woman, beautiful and deadly, you can wrap me in your web anytime. You really are very sexy. You have great poise, work on the transitions, don’t wobble.” Carrie Ann: You have so much power and when you dance you dig into it, it is very spectacular. All our eyes on you, you are stunning.” Len: “You spun a web that actually captured the flavor of Argentine Tango. Well done.”

Popstar and dancer JoJo Siwa and pro Jenna Johnson dancing Jazz to “Anything Goes” by District 78 ft. Patrice Covington (inspired by “IT”)

Judges Comments: Bruno: “It is terrifying and absolutely brilliant. You turned nightmare into a work of art. The quality of your dance, you are a terrific talent.” Carrie Ann: “I have so many thoughts going through my head. It’s obvious you are a brilliant dancer. I loved the way you pushed yourself further and you nailed it.” Len: “That was scary, I am so glad that I have on my rubber underpants. If ever a dance captured a flavor of a book, that was it.” Derek: “I hated it because I am terrified of clowns, I love the difference between the scary and horror, beautiful done, phenominal.”

Judges Comments: Carrie Ann: “I am scared of you for all the right reasons. You were amazing tonight, I love the connection. You danced together as one.” Len: “I don’t know about halloween, I am going to say hallelujah because I have been waiting for you to come out her and really show us your potential and tonight you have done it.” Derek: “You play a great psycho, that was your best dance. You could see the detail in the technique, the connection, you put the work in that dance, well done.” Bruno: “I find you guilty of murder on the dancefloor. The Cha Cha Cha was great.”

Judges Comments: Len: “I loved it, it had control, emotion, it held my attention and I thought that music was tricky and yet you managed to dance right along with it. Well done.” Derek: “The story of sacrificing yourself for the one that you love, it’s unbelievable on horror night we are all getting emotional. That was powerful on that dancefloor. You are always so committment and so authentic.” Bruno: “It went beyond dancing, you captured the essence of the movie which is actually a love story. Great job.” Carrie Ann: “This is why I love this show so much, you just understood the power of dance.”

Judges Comments: Derek: “I don’t know why you were in the bottom two last week, I think you have done an amazing job all season long and you are incredible. That was a difficult routine and you did such a great job, well done.” Bruno: “You kept up with him in a very hard routine. I have told you before shoulders, come on.” Carrie Ann: “You make things look effortless, we could see the strength, you held your own.” Len: “You are a zombie, last week you were almost dead and buried, and now you have come back to life and gave us a terrific dance.”

Judges Comments: Bruno: “All your performances make me feel good. You turn the whole thing around, you play it with such wit and sense of humour. When you played off each other it was absolutely delicious.” Carrie Ann: “That was a great performance, I feel that you need to give us more. There is always a pattern of a little bit of humour, a little levity. I want to see you push yourself, it was a little safe, I want to see more.” Len: “It was a mix of quantity and quality. The jive was great, it was a proper jive, well done.” Derek: “I want to see you push yourself more, a little difficulty, but it was still fantastic.”

NBA basketball star Iman Shumpert (“We Got Love Teyana and Iman”) and pro Daniella Karagach dancing Contemporary to “I Got 5 On It (Tethered Mix from US)” by Luniz ft. Michael Marshall (inspired by “US”)

Judges Comments: Carrie Ann: “Holy cow, that was genious, you transformed us to another world, my mind was blown. It was sheer perfection, yes.” Len: “You came up with the most brilliant concept that made Iman look fantastic, it was tight, it was together, it was terrific.” Derek: “I am speechless, that was like something people would watch over and over again.” Bruno: “I was totally transfixed, it was a masterpiece performance.”

Judges Comments: Len: “I liked your frame when you were in hold, lots of good movements on the floor, your footwork was hit and mess but you got right into character.” Derek: :”I love me some magic, there was a little disconnect with the music.” Bruno: “Its good to see you enhancing the drama, keep performing.” Carrie Ann: “There was a tiny lift, each week there was more and more, rip it out.”

Talk show co-host of “The Talk” Amanda Kloots and pro Alan Bersten dancing the Argentine Tango to “Paint It, Black” by Ciara (inspired by “SAW”)

Judges Comments: Derek: “I asked you to challenge yourself more, you did in this dance, that was a 10.” Bruno: “That was so sharp, there was so much real Argentine Tango there, the whole thing was great.” Carrie Ann: “Amanda you do not disappoint with any performance you brought on this dance floor. I think you are pushing yourself with too much tension and forcing some of the movements instead of allowing it.” Len: “You captured the character, it was too sharp and lacked a little bit of Argentine Tango feel.”

Time for the results.

In the bottom two, in no particular order are Suni Lee and pro Sasha Farber, Kenya Moore and pro Brandon Armstrong.

It is up to the judges to save one of the bottom two couples and keep them in the competition. If there is a tie, head coach Len Goodman’s vote will break it.

Kenya and Brandon are eliminated.