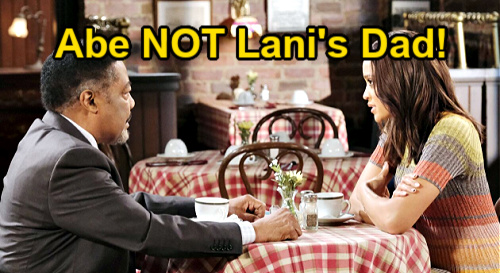 Days of Our Lives (DOOL) spoilers tease that Abe Carver (James Reynolds) apparently isn’t Lani Price-Grant’s (Sal Stowers) biological father, so he’s going to be devastated over Paulina Price’s (Jackée Harry) worst secret yet. Abe’s all set to give Paulina a second chance, but it’ll be ruined due to this buried bombshell and the damage it’s going to do.

Olivia Price (Marla Gibbs) is Paulina’s mom – and she won’t be happy when she shows up in Salem during the week of August 16-20.

Paulina surely had good reasons like not being ready for motherhood and the desire to protect Lani from her dangerous true dad.

Now that DOOL fans know Paulina had an abusive former flame and worked hard to get away from him, it makes sense that Paulina was trying to protect Lani by letting Tamara claim her.

Of course, Lani didn’t connect with Abe until much later in life – and that was apparently something that was never supposed to happen.

Days spoilers say Paulina made a pact with Tamara and Olivia to keep the truth under wraps, which is why Paulina never stayed around Lani for very long when she was younger.

It’s also why Olivia will come to town since she’ll feel like Paulina’s playing with fire!

Olivia will push Paulina to leave Salem and keep right on letting Lani believe she’s the daughter of Tamara and Abe – not Paulina and some random abusive guy who isn’t in the picture.

However, Paulina will be tempted to confess and will spark plenty of drama with her own mom in the process. Olivia will do her best to talk Paulina out of coming clean.

Since Paulina will insist on sticking around and trying to start something back up with Abe, Olivia may argue that telling the truth will destroy any shot at a romantic relationship with him.

Paulina will finally decide to stay tight-lipped, but this secret will be exposed anyway sooner or later.

Lani won’t be the only one who’s crushed and furious over the deception. Abe’s heart will be broken into a million pieces when he realizes Lani isn’t his daughter after all.

Although Abe’s trying to give Paulina the benefit of the doubt right now, he’s sure to blow up at her once he finds out this far worse secret.

Lani and Abe will still want to keep their bond alive, but all of this is going to be incredibly painful.

Can Paulina earn forgiveness for yet another massive secret and the fallout it’s going to cause? We’ll provide updates as other Days news becomes available.

Days of Our Lives spoilers say Abe will blast Paulina like never before down the road, so keep watching.

CDL’s where you want to be for sizzling Days of Our Lives spoilers, news and updates, so make us your top DOOL hotspot.