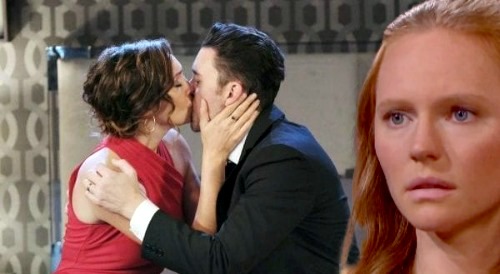 In that moment, Chad wanted to hurt Abigail back for betraying him with Jake DiMera (Brandon Barash). Chad was also looking to forget his pain for a while, so he pushed Gwen to sleep with him. Gwen was amazed by just how easily Chad fell into her trap.

It’s clear that Gwen’s manipulation worked like a charm since Chad was fully convinced of his wrong assumption about Jake and Abigail. Chad was also drinking, so that certainly altered his judgment.

Nevertheless, Chad has to take responsibility for his own choices here. He screwed up massively and doesn’t get a pass.

Chad went on a serious rant that questioned Abigail’s mental illness. Come on! Like Abigail would’ve willingly pranced around in a terrible “Gabby” wig. This woman was clearly unwell!

Not to mention Chad witnessed Abigail having Ben Weston (Robert Scott Wilson) hallucinations, even the ones that happened years before the drugging.

Chad deserves to pay for refusing to trust Abigail and for all the horrible things he said in that hotel room. He also deserves to pay for betraying Abigail, so you can bet he will. Whether Chad eventually comes clean himself or not, Abigail will find out that he slept with Gwen.

Ultimatum or no ultimatum, Days spoilers state that Gwen will want this bomb to drop. That was the whole point of sleeping with Chad – to hurt Abigail. This isn’t a secret that Gwen will be willing to sit on for too long.

Days of Our Lives spoilers say Gwen may even take it a step further by claiming she’s pregnant with Chad’s baby. It’ll probably be an implanted Stefano DiMera (Joseph Mascolo) clone embryo instead, but that won’t stop Gwen from trying to pass it off as Chad’s instead.

Gwen may also twist the knife for Abigail by bringing up Chad’s doubts about her mental illness. Chad was basically mocking Abigail’s sickness and everything she’s been through. At this point, Chad is an awful dirtbag of a husband who needs to suffer!

Days spoilers say Chad will face major consequences, so Abigail may demand a divorce and tell Chad they’re through.

Naturally, Chad might win Abigail back down the road, but he’ll face some heartache in the meantime. We’ll keep you posted as other DOOL news and updates emerge.