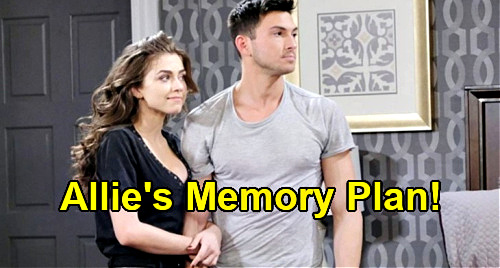 Days of Our Lives (DOOL) spoilers tease that Allie Horton (Lindsay Arnold) will be part of a sneaky plan to spark Ciara Brady Weston’s (Victoria Konefal) memory. She’ll push the bride to remember her love for Ben Weston (Robert Scott Wilson) on her anniversary, which also happens to be the same day as Ciara’s new wedding to Theo Carver (Cameron Johnson).

DOOL fans know Allie wound up being Ciara’s maid of honor at her first nuptials, so it looks like Ciara will make the same request for her ceremony with Theo.

Ciara hates Claire Brady’s (Isabel Durant) guts, so there’s really no one else in town for her to call on.

Of course, Days spoilers say this will put Allie in the prime position to help Claire and Ben with their upcoming plot.

It seems Ben and Claire will ask Allie to pitch in, so she should have no qualms about it. Allie witnessed the love Ciara and Ben had for each other first-hand, so she’ll want to help Ciara recapture it.

Just before Ciara’s set to marry Theo, Days spoilers say Allie will do her best to jog Ciara’s memory. She might be subtle about it at first and act like they’re just enjoying some girl talk.

Allie could describe the bachelorette party and Ciara’s illness on the morning of her nuptials, but she could also discuss some darker drama.

Allie could talk about the explosion and having to be hospitalized with concerns about her baby. Anything that might trigger Ciara’s memories would be helpful here.

Ciara had a bit of a memory flash during a conversation with Ben recently, so she might have another one with Allie.

However, Ciara will no doubt shove down anything she might recall. She’ll be all in on marrying Theo and running from her past with Ben, so Allie’s mission won’t be as successful as she hoped.

Naturally, that won’t matter as much once Ben takes action and steals Ciara away before her ceremony can begin!

Ben’s kidnapping scheme will be a game-changer during the week of July 19-23, so be sure to tune in. We’ll provide updates as other Days news emerges.