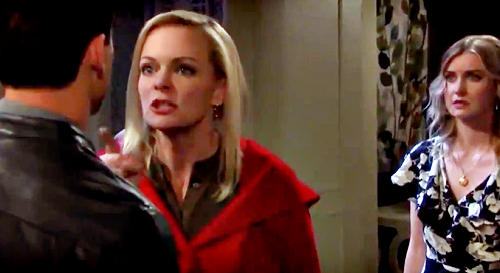 Days of Our Lives (DOOL) spoilers tease that Charlie Dale (Mike Manning) will fall for Claire Brady’s (Isabel Durant) trick during the week of February 22-26. Claire will be determined to get firm proof that Charlie assaulted Allie Horton (Lindsay Arnold) in London.

Charlie currently claims that what happened in Allie’s flat was consensual, but that’s obviously not true – and Claire will call him out on it.

Since Charlie seems pretty obsessed with Claire and this whole idea that they’re soulmates, Claire will use that to gain the upper hand. Days of Our Lives spoilers say Claire will assure Charlie that there’s still a chance for them.

Claire will lie that it’s only Ben Weston (Robert Scott Wilson) and her family that don’t want her to be with Charlie.

DOOL viewers can expect Charlie to buy it since he trusts Claire and wants this relationship so badly. Once Claire sees that she’s reeling Charlie in with her bait, she’ll take the next step.

Claire will contend that she’s ready to move forward as a couple on one condition. She’ll pretend like Charlie’s deception is the real issue for her rather than the assault itself.

Claire will push Charlie to come clean about what really went down in Allie’s apartment. She’ll suggest that if Charlie will tell her the entire story and be honest this time, then they can put all this behind them.

Days of Our Lives spoilers say it’ll take some convincing, but Charlie will decide he can go along with that demand. It’ll lead to Charlie telling Claire a very different version of events from the one he told her in the park.

Of course, Charlie will still put his own terrible spin on it. He’ll inevitably play up his “Mommy didn’t love me” sob story and act like it drove him to this.

Charlie will admit that he forced himself on Allie due to his rage over Tripp Dalton (Lucas Adams) being the golden boy who gets everything. Charlie viewed it as his chance to take something Tripp wanted for himself.

Claire will be disgusted by everything she’s hearing, but she’ll keep up her act and pretend she’s sympathetic to Charlie’s situation. Days spoilers say Claire will play the part of the devoted, loving girlfriend – at least until she’s certain she’s got enough of a confession to bring Charlie down.

Unfortunately, Charlie will happen to look down and notice that Claire has been secretly recording all this. It’ll send Charlie flying into a rage and leave Claire in grave danger. Claire will worry that Charlie’s going to rape her next – or worse, kill her on the spot.

Charlie’s anger will be unleashed like never before, so Claire will really see him at his most sinister moment.

It turns out Claire will be saved in the nick of time when Belle Brady (Martha Madison) returns home. Belle will hear the commotion and walk in the living room before Charlie has a change to do something too terrible.

Claire will narrowly escape Charlie’s clutches, but it seems he’ll manage to delete the recorded confession before he goes.

Claire will be grateful to Belle for preventing Charlie’s latest attack, but she’ll be discouraged about blowing the plan and not scoring the evidence needed to lock Charlie up.

However, Days of Our Lives spoilers say Charlie will get what’s coming to him another way since he’ll be killed off later in the week of February 22!

We’ll keep you in the loop as other Days news and updates come in. DOOL fans will see some scary moments for Claire leading up to Charlie’s murder, so stay tuned. CDL will have tons of other thrilling Days of Our Lives spoilers, updates and news, so be sure to stop by often.