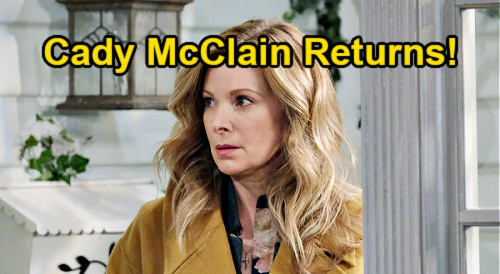 Days of Our Lives (DOOL) spoilers has some news to pass on about the return of Jennifer Horton (Cady McClain), a beloved Days of Our Lives character. As viewers are aware, Jennifer recently left canvas after her on-screen mother Laura Horton (Jaime Lyn Bauer) passed away after a tussle with Gwen Rizczech (Emily O’Brien). Jennifer went to Boston, where she was to meet her brother Mike Horton (Roark Critchlow) to settle Laura’s estate.

Well, at the time, it was announced that Cady McClain would be exiting, although now she’ll be reprising the role for a brief period starting on Monday, March 1st for some scenes that will apparently entail several phone calls as Jennifer remains in Boston.

We’ll have to see exactly what transpires, but it’s likely that Jennifer could decide to stay in Boston for an indefinite amount of time, perhaps to be with Mike or as Laura’s estate ends up being complicated and Jennifer’s presence is needed.

There’s always the possibility that Jennifer might return to Salem down the road, but for now it seems that Jennifer will stay away from her hometown.

In SOD, head writer Ron Carlivati revealed that Days of Our Lives might again bring Jennifer back on screen, although it’s not clear who might be playing the role at that point.

Days of Our Lives viewers will remember that Jennifer’s long-time portrayer, Melissa Reeves, chose not to return to the show once it went back into production after the COVID hiatus last year. It’s always possible that Melissa could return as Jennifer in the future, as could Cady McClain.

It will be interesting to see how Jack Deveraux (Matthew Ashford) fares without Jennifer on canvas. It looks like Jack will soon be helping Xander Kiriakis (Paul Telfer) prepare for his upcoming wedding to Sarah Horton (Linsey Godfrey), so Jack will keep busy doing other things, but for now it will be without Jennifer by his side.

Are you looking forward to seeing Cady McClain back this week? Stay tuned to Days of Our Lives and we’ll keep you informed about all the latest DOOL spoilers, updates, and news.