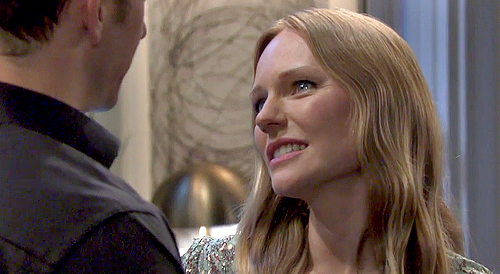 Days of Our Lives (DOOL) spoilers tease that Chad DiMera (Billy Flynn) will play John Black (Drake Hogestyn) in the possession movie and have some love story scenes with Abigail DiMera (Marci Miller) as a young Marlena Evans (Deidre Hall). Johnny DiMera’s (Carson Boatman) cast will take shape, but there’ll be some problems along the way.

During the week of October 4-8, Days spoilers say Abigail will decide she’s mulled over Johnny’s offer long enough. She’ll be prepared to deliver her decision on playing Marlena – and the answer will apparently be yes since she’ll be in these upcoming scenes with Chad.

Of course, we have to address how Chad will get his own role. Johnny didn’t mention anything about Chad playing John, but inspiration might strike after Abigail makes things official.

The idea might even come from Chad himself if he decides it’d be a fun project to tackle together.

Then again, it could be Abigail who gives Chad a nudge in that direction. The point is Chad will want the part and will reach a deal with Johnny soon enough.

Naturally, EJ DiMera (Dan Feurriegel) won’t be happy about all the support that’s being thrown behind Johnny’s movie.

That’ll lead to another DOOL brother battle between EJ and Chad, which will continue during the week of October 11-15.

Days spoilers say Chad and Abigail will put on quite a show as they recreate some special moments in John and Marlena’s love story.

This should be for rehearsal or even the film itself if Johnny’s flick is in production by then.

However, EJ will prove he’s as sneaky as ever. He’ll have a proposal for Johnny to consider – and later, EJ will have some big news that catches Chad and Abigail off guard.

It’s possible EJ will give Johnny the money he wants on the condition that he plays the lead role. EJ might swoop in and steal the part of John from Chad.

On the other hand, EJ would make a pretty perfect Stefano DiMera (Joseph Mascolo). Abigail and Chad might just be blindsided by the fact that EJ’s involved at all – especially if he’s going to be playing Stefano’s obsession with Marlena.

Whatever the case, there’ll be some cast shockers and shakeups as Johnny’s movie moves forward.

Days of Our Lives spoilers say Johnny will inadvertently create some conflict, so stay tuned to DOOL.

CDL’s where you want to be for the hottest Days of Our Lives spoilers, updates and news, so visit us often.