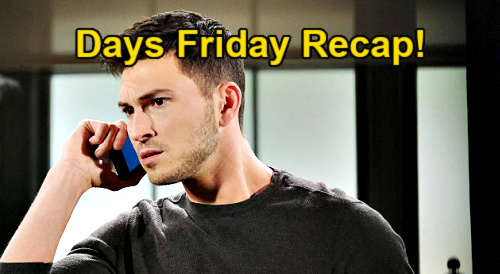 Sitting in the interrogation room, Vivian pretended to not know Jake and Kate, and Kate ranted that she should have known that Vivian would deny her own flesh and blood.

Jake looked startled by this, and he watched insults fly between his mom and Kate like ping-pong balls.

Soon, Kate lunged at Vivian, and Jake told her to calm down. Jake and Kate stepped into the squad room. Kate apologized for blurting out the information about Philip, and she decided to switch gears and do something that would really scare Vivian.

Kate and Jake went back into the interrogation room and Kate announced that she had a new younger man in her life who was at his peak…Jake!

Vivian watched in horror as Jake and Kate canoodled and got all lovey-dovey right in front of her. “Take your hands off my son!” Vivian bellowed. “Gotcha!” Kate sang. Vivian fumed that Kate had staged the whole thing, but Jake said that it was all true.

Kate chimed in that the whole conversation had been recorded and that it would blow up Vivian’s insanity defense.

Nicole was upset and vowed that Charlie wouldn’t get away with this.

Rafe cautioned Nicole not to make threats around him, and he noted that he was upset about this situation, too. Rafe also said that Charlie was still facing kidnapping charges for what he did to Ava Vitali (Tamara Braun), and that he’d do everything in his power to make sure Charlie was put away for a long time.

At the hospital, Charlie walked brazenly into Ava’s room and announced that the police dropped the rape charge against him. Charlie mused that it was Valentine’s Day, and that he was going to get flowers for Claire Brady (Isabel Durant).

Charlie also said that his “encounter” with Allie was 100% consensual – that was his story, and he was sticking to it.

Ava told Charlie that he disgusted her. “Oh, how will I go on!” Charlie said sarcastically. Ava said that Claire wouldn’t want to be with a man who assaults and kidnaps women.

After a lot of arguing back and forth, Ava called Charlie a loser, and Charlie said that wasn’t the case anymore, and that he had Claire and a job.

Ava scoffed that Claire goes to the funny farm like other girls go to the nail salon, and she felt pretty sure that the judge and the jury would see Charlie as a dangerous psychopath. “I guess the apple doesn’t fall far from the tree,” Charlie said.

Charlie noted that he’d have to make sure that Ava wasn’t available to testify, and he lunged toward Ava. Ava and Charlie scuffled, just as Nicole and Rafe walked in.

“We’re not interrupting anything, are we?” Rafe asked cautiously. Charlie instantly put on a Mr. Nice Guy act, blew his mom a kiss, and left. Rafe told Ava that he had come to ask if she’d still testify against Charlie.

Ava said that Rafe had her full cooperation, and Nicole worried that Ava wasn’t safe going back to her apartment. “You don’t have room for one more,” Ava replied. “No, but Rafe does,” Nicole said.

At Ben Weston’s (Robert Scott Wilson) apartment, Claire dropped by and Ben filled her in on his Romeo & Juliet dream.

Ben felt certain that he and Ciara Weston (Victoria Konefal) shared this dream, and he explained to Claire that he didn’t even know the story of Romeo & Juliet before the dream, but now he could recite lines from the play. Claire seemed skeptical about this.

Ben decided that he needed to go to the prison and talk with Vincent Belman (Michael Teh), but Claire stopped him, saying that she thought Ben was right to want to go find Ciara, but that he shouldn’t tip his hand to Vincent.

At the room where Ciara is being held, Rhodes (Jason Downs) taunted Ciara about reading Romeo & Juliet. Ciara told Rhodes that she saw Ben in her dream, and that Ben had seen her in his dream. Rhodes scoffed, then he gave Ciara her breakfast tray.

Rhodes left to go on a date for Valentine’s Day, and he left his phone on a little tray table.

After much trial and error, Ciara finally moved the table closer, knocked it over, and got the phone off of it.

In the park, Charlie gave himself a pep talk to call Claire. As the call was going through, Claire emerged in the park. Charlie turned and saw Claire and was happy to see her. “Hey,” Charlie said happily as the two came face to face.

Back at Ben’s apartment, Ben returned from somewhere where he had picked up a copy of Romeo & Juliet. To himself, Ben urged Ciara to keep trying to reach him. Ben’s phone rang from an unknown number.

Ben glanced at the Romeo & Juliet book, then he picked up the phone and said, “Ciara?”

That was a great episode of Days of Our Lives, and there’s much more coming next week, so stay tuned! We’ll give you updates throughout the weekend as more DOOL news comes in. Stick with CDL for the latest Days of Our Lives spoilers, updates, and news.