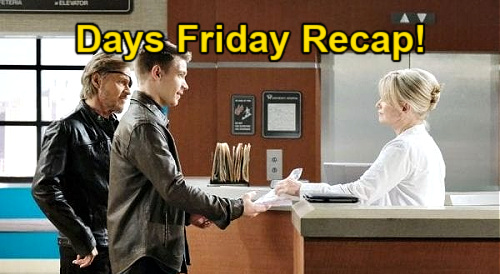 Xander wondered if Philip had asked Charlie to kidnap Ava, and Philip reeled.

Xander revealed that he knew that Philip was laundering money for Ava, and he said that Sarah Horton (Linsey Godfrey) got the evidence for him. Philip was incensed, and he ultimately admitted the truth, expressing disbelief that Sarah and Xander had never broken up.

Philip asked Xander what he planned to do with the information, and Xander said that he’d tell Victor Kiriakis (John Aniston) all about it. Xander then told Philip that he dissolved the shell company that Philip was using to launder money for the mob.

“You idiot, the mob will kill me!” Philip fumed, saying that Angelo Vitali (Angelo Tiffe) would come for him.

Claire said that she truly believed that Charlie was the man she saw, and she wondered if perhaps Ava was too out of it to accurately remember anything.

Belle revealed that she thought Charlie had been charming on Christmas Eve, but that Shawn Brady (Brandon Beemer) wasn’t a fan. Claire then remembered that Charlie left the party early, and she wondered if he was afraid that Allie would recognize him.

Claire also said that she had been at Charlie’s apartment and hadn’t seen Ava.

Belle told Claire gently that Rafe Hernandez (Galen Gering) had found Ava tied up in Charlie’s apartment, and she was glad that Claire wasn’t deeply involved with Charlie.

Claire cried, saying that she was deeply involved because she fell in love with Charlie. Belle soothed Claire, saying that Charlie had fooled a lot of people.

At the hospital, Kayla Brady (Mary Beth Evans) called Rafe and told him that the toxicology report came back on Ava, and that Ava had been drugged. Nicole Brady (Arianne Zucker) walked up and overheard the conversation, then tried to get information from Kayla about Ava’s condition.

Kayla couldn’t share any information with Nicole, frustrating her.

At the Salem PD, Charlie and Rafe talked outside the presence of Charlie’s lawyer. Rafe told Charlie that Ava said that he held her hostage and implicated himself in Allie’s rape.

Charlie fired back that Ava also said that he stabbed Tripp Dalton (Lucas Adams), which wasn’t true. Rafe said that was because Ava had been drugged.

Eventually, Charlie said that Ava showed up at his apartment talking about knives and threatening to hurt herself, so he tied her up. Charlie also said that it didn’t occur to him to call the police or a doctor, because Ava didn’t like doctors.

Rafe said something about Ava being Charlie’s mother, and Charlie answered affirmatively, getting caught in Rafe’s trap.

Rafe said that it was weird to lie about someone not being your mother, and Charlie said he was done talking without his lawyer. Just then, Nicole rushed in the room and started yelling at Charlie, saying that she was his worst nightmare. “You drugged my friend and raped my niece,” Nicole fumed.

Charlie insisted that this was all a mistake, and Rafe immediately got Charlie out of the room as Nicole continued to fume, even threatening to kill Charlie. Later, Nicole and Rafe were talking when Rafe got a call saying that Charlie had made bail and had been released.

At Charlie’s apartment, Tripp found Charlie’s toothbrush and put it in a baggie. Suddenly, someone started coming in the door, and Tripp hit the person with a baseball bat – it turned out to be Steve Johnson (Stephen Nichols).

Steve was fine, but he wondered what Tripp was doing. Tripp showed Steve the toothbrush, and they decided to get it tested at the hospital.

Back at the hospital, Steve and Tripp found Kayla near the nurses’ station and gave her the toothbrush to test against Henry Horton’s (Jayna and Kinsley Fox) DNA.

Tripp knew that the test wouldn’t be admissible in court, but he still wanted it run to clear his name and help Allie get justice. Tripp took off to wait in Ava’s room while Ava had a brain scan, and Kayla got the DNA test going.

Later, Kayla returned to the nurses’ station and talked with Steve. Kayla said that if the DNA test showed that Charlie was Henry’s father, then she’d owe a big apology to both Tripp and Steve.

Steve then got a call saying that Charlie made bail and was released. And in Ava’s room, Tripp realized that he left his phone in Charlie’s apartment.

At the Salem Inn, Brady Black (Eric Martsolf) and Chloe Lane (Nadia Bjorlin) talked as Brady looked through Titan’s financials. Brady mentioned that Kristen DiMera (Stacy Haiduk) saw a picture of his kiss with Chloe on New Year’s Eve, and that Kristen had freaked out.

Chloe and Brady established that they’re just friends, and that it was sad that Kristen was in prison for several more years.

Chloe wondered how Brady was going to deal with being alone, and Brady said he was committed to doing it. Later, Brady was back on his laptop looking for evidence of Philip’s money laundering, when Philip burst in and fumed that Xander had put a target on his back.

Finally, back at Charlie’s apartment, Tripp entered and retrieved his phone. Just then, Charlie walked in, and the brothers stood face to face.

There’s definitely a lot going on right now on Days of Our Lives, so stay tuned! We’ll give you updates as DOOL news comes in throughout the weekend. Remember, CDL is here for you with all the latest Days of Our Lives spoilers, updates, and news.