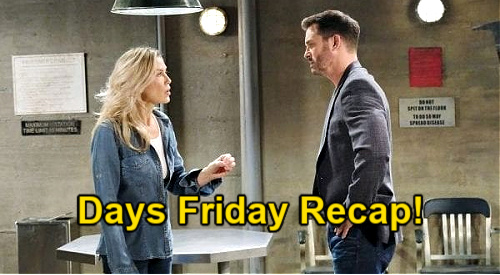 Days of Our Lives (DOOL) spoilers recap for Friday, January 8, reveal that Xander Kiriakis (Paul Telfer) was preoccupied while Sarah Horton (Linsey Godfrey) wanted some attention at the Salem Inn. Xander was pouring over the files that Sarah had copied off of Philip Kiriakis’ (Jay Kenneth Johnson) laptop, but he couldn’t find any evidence of embezzlement.

In town square, Bonnie Lockhart (Judi Evans) came along and needled Philip about his breakup with Mimi Lockhart (Farah Fath). Chloe Lane (Nadia Bjorlin) walked up, and Bonnie took off after disparaging Chloe.

Chloe wanted to talk to Philip about the mess he’s in with laundering money for the mob, and Philip reluctantly said that it involved Ava.

Philip took a call from Angelo Vitali (Angelo Tiffe), who said that he was taking over Ava’s role and that Philip had better come through. Chloe thought that Philip should go to the police, but Philip said no way, and that he had to keep doing what he’s doing.

At the Brady Pub, Abe Carver (James Reynolds) learned from Valerie Grant (Vanessa Williams) that she and her boyfriend broke up, but that she was seeing someone else.

Abe gently said that if they weren’t separated by so much distance, then he and Valerie could be together. Valerie agreed, and she thought that Abe would eventually find someone else.

At the hospital, Lani Price-Grant (Sal Stowers) and Eli Grant (Lamon Archey) were excited about getting the babies from the nursery, but they were stunned to find the cribs empty when they got there.

Eli thought that perhaps Valerie or Abe had gotten the babies out of the nursery, so he called Valerie at the pub, who said that neither she nor Abe had the babies.

At Statesville Prison, Brady Black (Eric Martsolf) arrived to find Kristen DiMera (Stacy Haiduk) upset over the picture of Brady and Chloe kissing in The Spectator.

Kristen fumed, and Brady explained that the kiss was platonic and that nothing was going on. Kristen then learned that Chloe was working with Brady at Basic Black.

Kristen was peeved, and Brady had a hard time calming her down, but eventually Kristen realized that Brady was being sincere and that there wasn’t anything going on between him and Chloe.

Brady and Kristen talked a bit about why Kristen had stabbed Victor Kiriakis (John Aniston), and Kristen mentioned Dr. Amanda Raynor (Victoria Platt), who was complicit in the baby switch last year.

Brady then introduced Kristen to Lani and Eli’s twins via photographs. Kristen was thrilled to see the twins, and later Kristen looked at the photos and told the twins that they had the best mommy who would always keep them safe.

In the park, Dr. Raynor walked along with the twins in a baby carriage. Dr. Raynor called someone and said, “It’s me. I did what you asked. I have the Grant twins.

They just assumed I was on staff. I’ll bring them to you now.” As Dr. Raynor was getting ready to go on her way, Bonnie came along having found a pacifier on the ground.

Bonnie gushed over the babies, noting that they were twins – one boy and one girl, which she could tell by their blue and pink hats. Dr. Raynor acted nervous and said that she had to go.

Bonnie helped herself, and she picked up one of the babies, then she put the baby back in the carriage. Dr. Raynor then walked off with the babies.

Back at the hospital, Eli learned from the head nurse that the babies were unaccounted for. Valerie tried to reassure Lani that there were security measures in place in hospitals so that people couldn’t walk off with babies.

Lani was inconsolable and had a panic attack, crying and saying that she couldn’t go through this again.

Abe got on the phone with Rafe Hernandez (Galen Gering), and eventually Eli and Lani convened in a room with the hospital surveillance footage, which showed absolutely nothing. Eli noted that it was if the person who took the twins knew how to avoid the security cameras.

Eli urged Lani to hold it together and to be a cop right now to help him find the babies. Over at the nurses’ station, Abe returned to Valerie, having just found the babies’ hospital bracelets in the stairwell near the emergency exit. Valerie broke down and cried in Abe’s arms.

Back in town square, Brady found Chloe and Philip still talking. Brady wondered what Chloe and Philip were talking about, and Philip made up some excuse. But Chloe said that Philip was in serious trouble and that they needed Brady’s help.

There’s definitely a lot going on right now on Days of Our Lives, so stay tuned! We’ll give you updates as DOOL news comes in throughout the weekend. Stick with the NBC soap and don’t forget to check CDL regularly for the latest Days of Our Lives spoilers, daily episode recaps, and news.