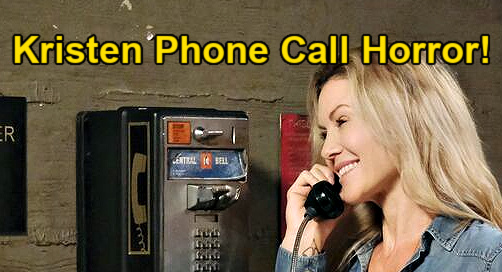 Days of Our Lives (DOOL) spoilers tease that Kristen DiMera (Stacy Haiduk) will face the most horrific, shocking phone call of her life. Brady Black (Eric Martsolf) will hear from Kristen at Statesville, but he’ll lie about steering clear of Chloe Lane (Nadia Bjorlin).

Brady will actually be heading to the Salem Inn to check on Chloe since she’s hiding Philip Kiriakis (Jay Kenneth Johnson), but he won’t think it’s wise to tell Kristen that.

While Brady’s on the phone, a mob hitman will arrive to make Philip pay. Days spoilers say Brady will get shot in a case of mistaken identity – and Kristen will be on the phone with him when the bullet hits him in the stomach.

Brady will drop the phone as he reels over his sudden wound, but Chloe will see what’s happening and hear Kristen still trying to talk to Brady on the other end.

Once Kristen hears Chloe’s voice, she’ll flip out since Brady claimed he wasn’t with her. That’s when Chloe will drop the bomb that Brady’s been shot.

Days of Our Lives spoilers say Chloe will frantically insist she has to call Brady an ambulance, so she’ll hang up and leave Kristen freaking out even more.

DOOL fans can expect Brady to have some scary moments. In fact, Brady will almost die! He’ll lose a lot of blood and will definitely struggle to survive, but Kayla Brady (Mary Beth Evans) and her team will leap into action.

Days spoilers say they’ll do everything they can to stabilize Brady and make sure he pulls through this bloody ordeal.

Chloe will feel incredibly guilty since Brady tried to warn her about the danger of hiding Philip, but she wouldn’t listen. DOOL spoilers say Chloe will just hope Brady’s going to be OK, but it’s Chloe who’ll be in danger soon after.

Kristen will decide to take Tony DiMera (Thaao Penghlis) hostage after he visits her, so she’ll manage to score a gun and escape to the hospital. That’s where Kristen will threaten to shoot Chloe for what’s happened to Brady.

Kristen will even accuse Chloe of shooting Brady herself, but Chloe will surely correct her on that. She’ll try to explain that the mob came after Brady after confusing him for Philip, but Kristen will still hold Chloe responsible for Brady’s near death.