Days of Our Lives Spoilers: Kristen’s Revenge On Brady and Chloe – Heartbreak Leads to Terror 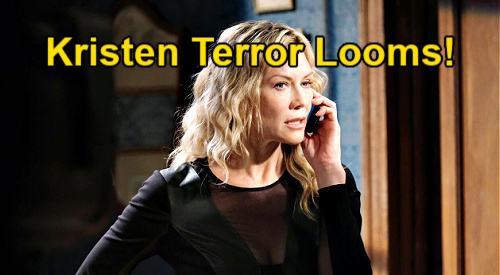 Days of Our Lives spoilers reveal that Kristen DiMera (Stacy Haiduk) called Brady Black (Eric Martsolf) with high hopes. However, she was rejected and we all know how the she-devil reacts when her heart is broken. Not only will she go after Chloe Lane (Nadia Bjorlin) once again, but Brady just put a big target on his back. Kristen’s not going to allow him to get away with this.

DOOL spoilers reveal that Brady received a call from an unknown number. When he picked it up, he was shocked that it was Kristen. She began by asking about their daughter, Rachel Black (Josephine and Rosalind May).

All Brady would say is “she’s fine” and clearly knew Kristen really wasn’t interested in her daughter’s welfare.

The intent of the phone call was to insert herself back in Brady’s life. If she cared at all about Rachel, she wouldn’t have done all those terrible things.

Plus, she never really saw Rachel when masquerading as Susan Banks (also played by Haiduk). Her child was not her priority. Instead, it was punishing Chloe and anyone else who got in her way.

Kristen tried to act apologetic as that has worked on Brady before. However, when he mentioned receiving her personal effects from the prison, the villain knew the jig was up.

Chloe’s photo with a giant “X” over the face reminded him of who Kristen really is.

Brady basically told Kristen off and that’s when her claws came out. Before hanging up, Kristen said that she hopes Brady and Chloe are miserable together.

Days of Our Lives spoilers reveal that Brady should have instantly hung up the phone.

By talking to Kristen, she was able to gather information. It also made the situation even worse. He basically confirmed that he is seeing Chloe even though that’s not quite true yet.

We saw Brady pull Chloe into a passionate smooch, which Philip just happened to see. So, Chloe might have made a decision, but the kiss is so good, it will put her back to square one.

With Kristen believing that Brady moved on with the opera singer, it endangers Chloe. When you factor in the unstable woman being heartbroken and rejected, her obsession with revenge will intensify.

Kristen is a very passionate woman. She loves hard, obsesses hard and hates hard. So, when she wanted Brady, she stopped at nothing until she got him.

Expect her to go full-force not only at hurting Chloe, but Brady as well.

We do know that the future couple survives based on Martsolf’s comment during a recent Zoom fan event.

However, the actor hinted that Kristen is really going to put the two characters through the wringer. So, expect some major drama and chaos.

Be sure to catch up on everything happening with DOOL right now. Come back often for The Days of Our Lives spoilers, news and updates