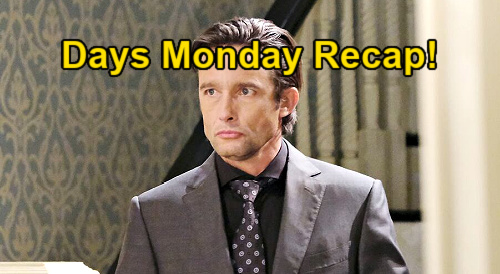 Days of Our Lives (DOOL) spoilers recap for Monday, January 25, reveal that Julie Williams (Susan Seaforth Hayes) and Doug Williams (Bill Hayes) talked at the Horton house. Julie was worried about the Grant twins and couldn’t eat, even at Doug’s urging.

Soon, Abe Carver (James Reynolds) arrived with news about how Dr. Amanda Raynor (Victoria Platt) was the person who took the twins.

Julie got upset upon hearing this news, and she had symptoms mimicking a panic attack. Doug worried about how Julie’s heart was racing, but Julie downplayed the incident. Abe said he was driving Julie to the hospital, no ifs, ands, or buts.

Chloe insisted that this was her call, and that she was going to let Philip stay with her as long as he needed.

Philip left to go pick some things up from the Kiriakis mansion, and Brady and Chloe argued some more about Philip.

Brady threatened to “out” Philip’s entanglement with the mob to Victor Kiriakis (John Aniston), but Chloe insisted that Brady not do that. Brady lamented that the mob might kill Chloe.

Sarah spilled everything about Philip and the mob to Maggie, and as Sarah was ranting about how Philip could be dead, Philip appeared.

Philip was peeved with Sarah for helping Xander Kiriakis (Paul Telfer) in his quest to dissolve the shell company, which painted a target on Philip’s back. Philip managed to get both Sarah and Maggie to agree not to tell Victor about the mob mess.

Philip left, and Sarah got a call from the hospital saying that Julie was being admitted.

Kristen couldn’t be of help, and Lani explained that Xander was going to try to reach out to Dr. Raynor. Together, Lani and Kristen prayed for the safe return of Lani’s twins.

At the Salem PD, Xander told Eli Grant (Lamon Archey) that well over a year ago, he had given Dr. Raynor an untraceable phone. Xander called the phone, and Dr. Raynor answered. “I thought we could chat about the babies you stole,” Xander said.

Xander pretended like he wanted to help Dr. Raynor, and he offered to help her disappear and slip out of the country undetected.

Eli listened intently to the conversation, as Dr. Raynor refused to give up where she was. Xander tried to get Dr. Raynor to meet in the park, saying that the police were onto her, but Dr. Raynor didn’t take the bait.

Xander ended the call, and he and Eli agreed that Dr. Raynor bought Xander’s story.

At the hospital, Sarah tended to Julie and wanted to keep her for observation after giving her a beta blocker. Julie was still scared for her grand babies, and she made Abe promise her to keep her in the loop but not to tell Lani and Eli that she’s in the hospital for the time being.

Back at the Salem Inn, Philip returned and told Brady and Chloe about seeing Maggie and Sarah at the mansion. Brady got a call from Kristen, who wanted to know where Brady was.

Brady lied and said that he wasn’t with Chloe when Kristen asked, and he walked toward the door. Brady opened the door.

From Kristen’s vantage point at Statesville, a gunshot rang out. “Brady? Was that a gunshot?” Kristen said anxiously into the phone.