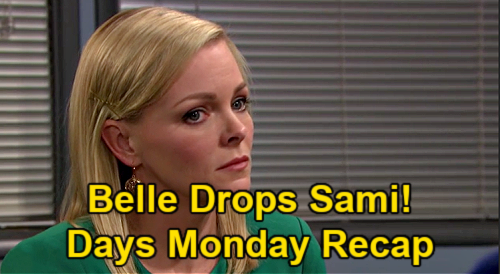 Allie had Henry Horton (Jayna and Kinsley Fox) in tow, and she and Lucas discussed how Sami Brady DiMera (Alison Sweeney) was kept overnight at the Salem PD. Soon, Lucas got on the phone and found out that Sami was also arrested.

Allie lamented that this was all her fault, but Lucas insisted that it wasn’t. Soon, Tripp Dalton (Lucas Adams) came along and was happy to see Henry. Tripp, Allie, and Lucas talked about Charlie Dale’s (Mike C. Manning) murder, and Tripp learned about Sami’s arrest.

Tripp said that he was relieved that Charlie was out of their lives for good, and he asked if Henry could meet his mom.

At the Hernandez house, Ava Vitali (Tamara Braun) greeted Rafe Hernandez (Galen Gering), who was briefly home from work. Ava learned that Sami was in custody for Charlie’s murder, and it didn’t seem to faze Ava at all.

Ava thought that justice had already been done via Charlie’s death, but Rafe said that in the eyes of the law, someone had to pay for the crime.

Ava said that she was going to go pack, since there was no reason for her to stay at Rafe’s house any longer. Rafe said that Ava should stay for a while – at least until she gets her head right.

Rafe took off for the station, and soon Tripp poked his head in the door saying that he brought someone to meet Ava.

“Meet your grandson,” Allie said as she wheeled Henry into the house. Ava was thrilled, and she was able to hold Henry for a little while. Ava said that this was very kind of Allie to do, especially considering how they first met.

Ava said that she was sorry for what Charlie did to Allie, and Tripp reiterated that they were all better off without Charlie.

At the Salem PD, Belle Black (Martha Madison) entered the interrogation room to get answers from Sami about why her fingerprints were on the murder weapon. Sami said that she touched the gun but that she didn’t kill Charlie.

Belle said that this was Sami’s final chance, and that she couldn’t lie to her again. Sami promised, and so Belle agreed to continue to represent her.

Belle wondered if Sami was protecting someone, like Allie, but Sami said that she wasn’t. Rafe walked in and Belle confidently said that Sami picked up the gun but didn’t shoot Charlie.

Rafe then revealed that the full ballistics report came back and that there was gunshot residue all over Sami’s clothes from the night of the shooting.

Sami couldn’t explain, and Rafe implored Sami to tell them what really happened. Sami wouldn’t speak, so both Rafe and Belle left, with Belle telling Sami that she quit for real this time. Sami was horrified.

In the park, Chad DiMera (Billy Flynn) demanded to know what Abigail DiMera (Marci Miller) was doing there with Gabi DiMera (Camila Banus). Abigail said that she asked to see Gabi so she could apologize to her. Abigail then staged an apology to Gabi for accusing her of the drugging last year.

Eventually, Chad took off, and Abigail told Gabi that it was time to go get Wilhelm Rolf’s (William Utay) drug stash to use to threaten Gwen Rizczech (Emily O’Brien).

Meanwhile, over at the DiMera mansion, Anna DiMera (Leann Hunley) asked Gwen what she was doing in the wine cellar all tied up. Gwen said that Abigail and Gabi had kidnapped her.

Anna didn’t sympathize with Gwen at all, and she refused to untie Gwen. Instead, Anna retrieved some wine from the cellar and left Gwen after taunting her a little bit.

Soon, Abigail and Gabi walked into the cellar and Abigail promptly whipped out a drug vial and a syringe. Abigail told Gwen that this was Rolf’s drug and that it was more powerful when injected.

“Record the confession,” Abigail told Gabi. Gabi started recording, and Gwen griped about how they were recording a crime. Undeterred, Abigail came closer to Gwen with the syringe, and Gabi asked Gwen to confess to Abigail’s drugging first.

Gwen tried to call Abigail’s bluff, and in response, Abigail held the syringe as if to stab Gwen with it.

Up in the DiMera living room, Chad found Anna. “I see you found something in the basement,” Chad said, referring to Anna’s wine. Anna panicked, thinking Chad was talking about Gwen.

When Chad said he was going down to the cellar for some wine for dinner later, Anna blurted out, “No, don’t go down there!”

Days of Our Lives is fantastic right now, so don’t miss an episode! Stick with the NBC soap and keep coming back to CDL – we’ll keep you up to speed on the hottest new Days of Our Lives spoilers, updates, and news.