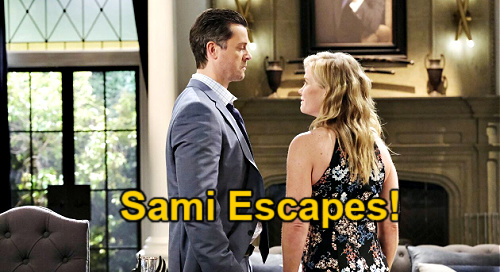 Days of Our Lives spoilers reveal that Sami DiMera (Alison Sweeney) has been kidnapped. Although EJ DiMera (Dan Feuerriegel) appears to be the culprit, the actor teased that he’s innocent. In fact, he’s heartbroken that Sami broke her promise and never came back. When Sami escapes, EJ will probably want her back. However, he could be blindsided by her decision.

DOOL spoilers reveal that Sami was kicked out to the curb before disappearing. Sami was determined to stay in the DiMera mansion and was literally at Rafe Hernandez’s (Galen Gering) back door.

Before Sami could even knock on the door to speak with Gabi Hernandez (Camila Banus), someone wearing a black glove put chloroform over Sami’s nose and mouth.

Rendered unconscious, Sami was dragged away in broad daylight but with no witnesses. So, the person responsible didn’t take Sami very far.

Nobody is looking for Sami due to the captor sending text messages from the hostage’s phone. Allie Horton (Lindsay Arnold) and Marlena Evans (Deidre Hall) both received texts explaining Sami’s absence.

It sounded believable enough, so it was also someone that knew how Sami would text and what verbiage she would use.

In a recent interview with SOD, Feuerriegel said that Sami promised EJ she wouldn’t leave and now she’s gone. So, EJ is trying to move on with Nicole Walker (Arianne Zucker). It sounds like EJ is heartbroken and innocent of kidnapping Sami.

“EJ is trying to move on. Sami’s gone, she said she wanted to get back together with him, she wasn’t going to leave, but then in his mind, she left…”

However, we wouldn’t put it past another member of the DiMera family to get rid of the Salem schemer.

Days of Our Lives spoilers reveal that Sami is going to return to Salem before the end of 2021. With nobody knowing she’s even been abducted, it means not one person is looking for her.

So, Sami is going to have to figure out a way to escape on her own. When Sami comes back, she will probably have an epic tale of what happened to her.

EJ might also find out who took her, which could be Kristen DiMera (Stacy Haiduk) or even Ava Vitali (Tamara Braun).

Although Lucas is a suspect, there are so many “Lumi” fans that want a reunion that he’s probably innocent. Plus, kidnapping isn’t Lucas’ style. It’s right up Kristen or Ava’s alley, though.

Days of Our Lives Spoilers: Listening to Her Heart

EJ could decide that he wants Sami back. Even though EJ and Nicole have a history together, photos surfaced earlier this year of Nicole posing with Rafe. So, that strongly suggests “Racole” eventually become an item.

Plus, both characters have changed so much over the years that EJ and Nicole might not mesh as easily as they used to.

When Sami comes back, EJ could assume that they will step right back into their marriage. However, Sami’s had a lot of time to think about her life and the men in it.

Out of all the people that should have sensed something was wrong, EJ should have searched for her. If not for himself, then for the children.

There is also how Sami feels about Nicole. The fact that EJ would so easily move on with Sani’s enemy could affect the future of “Ejami.”

Sami just might listen to her heart and realize Ej simply owned her, but Lucas is the person who truly loves her.

Be sure to catch up on everything happening with DOOL right now. Come back to CDL often for Days of Our Lives spoilers, news and updates.