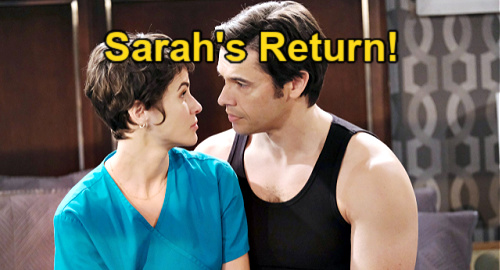 Days of Our Lives (DOOL) spoilers tease that Xander Cook Kiriakis (Paul Telfer) will make a million-dollar sacrifice, so let’s talk about how this grand gesture will set up Sarah Horton’s (last played by Linsey Godfrey) return.

DOOL fans know Gwen is already amazed by the kindness Xander has shown her. Xander has gone to great lengths to hide Gwen’s secret about the timing of her miscarriage. The only reason Xander’s stuck in jail right now is because he wanted to protect Gwen.

However, Xander’s next sacrifice will really take things to another level in Gwen’s eyes.

Trask acted like she was against bribes when she cut a deal with Victor Kiriakis (John Aniston), but she might change her mind and want Xander’s money.

Of course, it’s also possible Trask will just want Xander to suffer a bit since she’s being forced to let him back out on the streets.

Trask might want to give the money to charity just so Xander can’t get his hands on it again. On the other hand, Trask may decide she doesn’t need a DiMera for an enemy if she can help it.

The DA might argue that Xander must’ve gotten that money through some shady endeavor and plan to return it to EJ – perhaps to get EJ off her back if nothing else.

Whatever the case, Trask will insist Xander will no longer have control of that money. She’ll act like she’s only willing to free Gwen if Xander gives up the cash.

Xander could call Trask’s bluff, but he won’t want to risk it when something as important as Gwen’s release is on the line.

Days spoilers say Xander will gladly give up that $1 million if it means Gwen can walk out of that police station as a free woman.

Even so, Gwen will be upset in the aftermath. Although Gwen will be touched to learn Xander once again gave up something so massive for her, she’ll feel like she should at least try to get his money back.

Whether Gwen succeeds or not, we’ll see her bond deepen with Xander like never before.

Days viewers can expect Gwen and Xander to make love to celebrate their joint freedom later. However, Kristen DiMera (Stacy Haiduk) seems poised to use her ace in the hole at some point.

Kristen is the only one who knows Sarah is stashed on some remote island against her will. She’ll no doubt try to manipulate her way out of legal hot water – whether through a legit deal or by facilitating an escape.

One way or another, Xander’s going to learn Sarah didn’t really dump him. He’ll also discover Sarah’s island situation and plot a rescue, so Gwen will fear the worst.

Gwen will go from falling hard for a man who’d give up a million bucks for her to worrying he’s going to reunite with his kidnapped ex!

This $1 million sacrifice will set the stage for Gwen to potentially sacrifice Xander himself, so that’ll be a tough pill for her to swallow.

Days of Our Lives spoilers say the excitement’s about to rev up in Salem, so stay tuned to DOOL.

CDL’s where you want to be for scorching Days of Our Lives spoilers, updates and news, so drop by regularly.