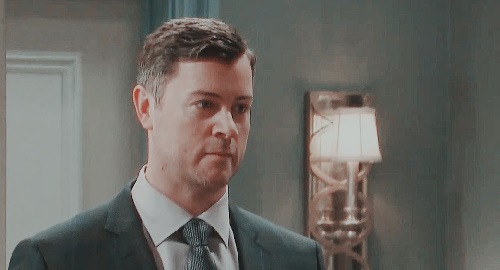 For starters, the real Marlena will continue to battle the devil threatening to take over. Since Marlena hasn’t completely surrendered to his demonic powers yet, she’ll still have moments where she’s more like herself. Marlena will have a truly terrible dream – perhaps one that serves as a grim prediction of what’s to come.

Unfortunately, the devil will keep tormenting Marlena and inching her closer to the sinister side. Marlena will be in full possession mode once next week rolls around, so she won’t be able to fight off the devil inside for much longer.

In the meantime, John will shut down the idea of investing in Johnny’s film. He may admit it would reopen old wounds and could pose a threat to the family, so John just can’t get on board with any of that.

Of course, John can’t stop Johnny from making his movie, but he could offer an incentive to change the story. Perhaps John will suggest he’d indeed invest if Johnny picked a different subject entirely, but Johnny seems pretty set on doing a film that highlights the possession.

Other Days spoilers say Allie Horton (Lindsay Arnold) will open up to Chanel Dupree (Raven Bowens) on Thursday’s DOOL episode. Allie will want to talk about Tripp Johnson (Lucas Adams), so that might involve Tripp’s skepticism over the possession story.

Allie might also divulge how she’s feeling about Tripp now that their relationship has progressed a bit more. DOOL viewers know Allie didn’t say “I love you” back when Tripp first said it to her. Is Allie any closer to being ready? Will Allie ever really feel that way about Tripp at all?

Allie will have to sort through her feelings eventually, but things could get awkward depending on how much she shares with Chanel. Next, Lucas will bump into EJ and may hear about his enemy’s date with Nicole Walker (Arianne Zucker). It’s easy to imagine Lucas taking a jab or two about EJ moving to the reject pile now that Sami Brady DiMera (Alison Sweeney) is gone!

EJ might remind Lucas that he’s the one who dumped Sami, not the other way around. Now EJ is a free man who can date anyone he pleases as far as he’s concerned. The looming divorce is just a formality, so EJ’s ready to head out for a night on the town with Nicole.

However, Lucas will keep running his mouth and pushing EJ’s buttons. These enemies will almost come to blows, so it’s good to see this rivalry’s alive and well! As other Days news rolls in, we’ll pass along updates.