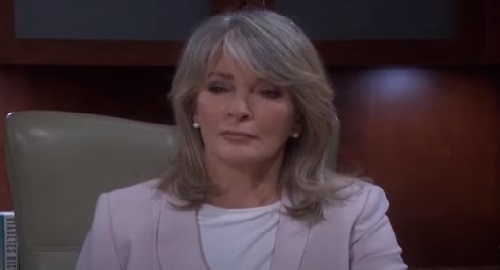 Days of Our Lives (DOOL) spoilers recap for Thursday, September 30, reveals that Marlena Evans (Deidre Hall) faced a tape recorder scare and received a message from the devil. Abigail DiMera (Marci Miller) also got a big movie role offer, so here’s how it all went down on Thursday’s DOOL episode.

At the pub, Lucas Horton (Bryan Dattilo) overheard EJ DiMera (Dan Feurriegel) discussing reservations for a special event and reunion of sorts. When Lucas wondered if this had something to do with Sami Brady DiMera (Alison Sweeney), EJ denied it and didn’t think it was any of Lucas’ concern anyway.

The fight over Sami escalated as Lucas called EJ a “son of a bitch” – and EJ fired back by calling Lucas a loser. Roman Brady (Josh Taylor) stopped Lucas and EJ from coming to blows before Lucas mentioned his investment in Johnny DiMera’s (Carson Boatman) movie.

EJ fumed after Lucas left and was further irritated when Roman admitted he was also investing in the film. Roman wondered if EJ ever thought about how stupid he was and felt like sneering at Johnny’s passion was a surefire plan to drive him away.

EJ thought Roman was indulging Johnny like he indulged his “tramp daughter,” so Roman made it clear those were fighting words! After EJ apologized for crossing the line, Roman warned that EJ was about to push Johnny away with his actions.

At the Kiriakis mansion, Kate Roberts (Lauren Koslow) showed up to see Philip Kiriakis (Jay Kenneth Johnson) since she was concerned about Lucas being all sad and mopey. Philip suggested Lucas was a grown man who should accept it was “game over” with Sami. He also thought Kate should focus on her own love life, but Kate didn’t want to take the risk with Roman.

In Doug Williams’ (Bill Hayes) hospital room, Julie Williams (Susan Seaforth Hayes) seemed offended over Tripp Johnson’s (Lucas Adams) focus on science over faith. However, Tripp didn’t think the two had to be mutually exclusive. He also pointed out there could sometimes be a scientific explanation without actually knowing what it is.

That led to Tripp talking about Marlena’s possession – and Doug’s vitals changed when he did. In the end, Tripp smoothed things over and suggested he’d say a prayer for Doug now that he was ending his shift. Julie liked the sound of that and thought they’d make progress with both their views.

In the town square on Thursday’s Days episode, Chanel Dupree (Raven Bowens) mentioned it was hard to get a good night sleep with the bed rocking. Allie Horton (Lindsay Arnold) assumed Chanel hit the sheets with Johnny and wondered if it was worth the wait.

After Chanel teased Allie about her dirty mind, she suggested she was just tossing and turning due to watching The Exorcist with Johnny. Chanel dreamed she was the girl in the movie and didn’t think Johnny should be provoking the devil with his flick.

Chanel eventually fished to find out if Allie was really OK with her dating Johnny, so Allie acknowledged that she was happy for them if Johnny had truly changed. As for Tripp, Allie said she “really, really cared” about him. That left Chanel curious about what the problem was, so Allie offered updates on the one-sided “I love you” situation and how she wasn’t ready to say it back yet.

Suddenly, Tripp appeared and wondered what the ladies were talking about. Allie and Chanel covered about Tripp being a 5:00 a.m. hero who was there for Henry Horton (Jayna and Kinsley Fox). When Allie planted a kiss on Tripp, Chanel looked a bit uneasy.

At the townhouse, John Black (Drake Hogestyn) talked to Johnny over the phone and mentioned that Marlena was resting in the other room since she wasn’t feeling well. John said they were going to pass on investing and warned Johnny to leave that horrific, private part out of the movie.

Once Johnny disconnected on Thursday’s Days episode, he muttered to himself about the possession being the only part he was leaving in! Johnny wound up talking to Abigail about the movie later, so she worried about her affair with EJ being included.

After Johnny messed with Abigail a bit, he admitted he was rewriting the script and intended to cut that whole storyline. Johnny explained how he’d concentrate on when Marlena was possessed by the devil, but Abigail urged him to see how the family might view that as exploitative.

Johnny downplayed that aspect and mentioned that he wanted to cast people connected to Salem for his movie. He suggested Abigail would be perfect for the role of Marlena and caught her off guard. Abigail understood what it was like to have someone take over her life due to her experience with DID, so Johnny wondered if that meant she’d do it.

Back at the townhouse, Marlena dreamed of when the possessed version of herself tried to kill Doug. She woke up startled and cried out, so John came running in and asked what was wrong. Marlena seemed out of it and couldn’t remember much, but she felt like she made things worse when she tried to help Doug.

John didn’t see how that was possible, but he pointed out Marlena might’ve recorded her session. That gave Marlena hope that she could accomplish something, so she wanted to get dressed and head to the hospital. John insisted on driving Marlena since he wanted to be there for Doug and Julie anyway.

In Marlena’s office, she listened to Doug’s tape and eventually heard the devil hijack the conversation. After Marlena shut the tape off and tried to rewind, the devil took control of the recorder and acted offended that Marlena had already forgotten their reunion. He suggested Marlena should allow him to refresh her memory.

Back in Doug’s hospital room, John promised to stay with Doug while Julie went home to shower and change. John reassured Doug about Marlena trying to find a solution, so Doug’s vitals changed again. Doug ultimately piped up about how Marlena needed help and added that she tried to kill him!