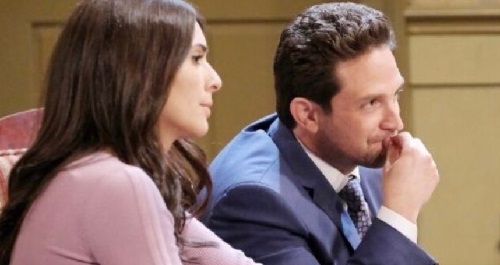 Days of Our Lives (DOOL) spoilers recap for Tuesday, December 7, reveals that Brady Black’s (Eric Martsolf) deadly text was discovered while Gwen Rizczech (Emily O’Brien) had a close call with Rex Brady (Kyle Lowder). Jake DiMera (Brandon Barash) also made a huge promise to Victor Kiriakis (John Aniston) with Gabi Hernandez DiMera (Camila Banus) backing him up, so here’s how it all played out.

At the Kiriakis mansion on Tuesday’s DOOL episode, Victor suggested there were a lot of positives to consider in Jake and Gabi’s pitch. However, Victor was more interested in talking about the negatives – the biggest one being the fact that he thought Gabi and Jake were both idiots.

Gabi tried to tout Gabi Chic as something profitable she was bringing to the table, but Victor felt that was chump change. When Jake offered DiMera Enterprises, Victor thought it was like offering him Puerto Rico or eternal life! He didn’t really believe Jake had the power to deliver something as big as DiMera, especially with someone as capable as EJ DiMera (Dan Feuerriegel) in charge.

However, Jake argued that EJ had everyone at each other’s throats. Gabi agreed a house divided would collapse, but Victor remained skeptical. Jake ultimately argued that they had enough shares to put it to a vote at DiMera Enterprises, so he suggested putting this on a timetable and seeing if they could make a deal happen.

Jake urged “Vic” not to be an idiot and basically thought he had nothing to lose here. Victor warned this was all talk, but he pushed Jake and Gabi to put things in place to give him a seat on the board of directors. If they could pull that off, Victor was willing to finish this conversation about putting Jake and Gabi in charge at Titan.

At home later, Gabi and Jake decided that once they were in control of both companies, she could run Titan while he ran DiMera. Jake also suggested a merger of their own in the meantime, so they prepared for lovemaking.

When Gwen returned to her hotel suite, she called out and realized Xander Cook Kiriakis (Paul Telfer) wasn’t back yet. Gwen guzzled a tiny bottle of booze from the mini bar and tried to collect herself. She knew she had a lot riding on keeping all her secrets under wraps and worried Xander could go island hopping to find Sarah Horton (Linsey Godfrey) if he knew the truth.

After Xander returned from the police station, he admitted he couldn’t really blame Rafe Hernandez (Galen Gering) for questioning him under the circumstances. Xander worked with Kristen DiMera (Stacy Haiduk) for a while and happened to be at the Salem PD right before her escape.

Xander wondered who actually helped Kristen make her getaway and jokingly quizzed Gwen since she was also at the Salem PD just before Kristen fled. Gwen changed the subject to dinner at Julie’s Place, but Xander thought maybe they should go somewhere where they weren’t tempted to dine and dash – particularly since Gwen wasn’t keen on committing any more crimes.

Gwen insisted she meant that, so Xander wondered if his bad girl had gone good. When Gwen said she thought Xander liked good girls, he asked if they were talking about Gwen or Sarah. Xander understood if Gwen was maybe a bit jealous after his recent Sarah questions, but Gwen countered that she was simply protective.

Regardless, Xander wanted Gwen to know that Sarah was his past. He assured Gwen that she was his present and hopefully his future. Gwen sent Xander to soak a stain on his sleeve while she grabbed a table for them at the pub, but Xander offered one last reminder that Sarah could be on the moon for all he cared!

At the DiMera mansion, Chad DiMera (Billy Flynn) apologized to Abigail DiMera (Marci Miller) since he’d been dodging her calls due to work drama. Chad found out Kristen escaped, but he ultimately decided he didn’t care. He just wanted Kristen to stay away, but Abigail felt Chad’s sister would always come back.

Chad complained about EJ adding some last-minute changes to a deal to try and make him look bad. He was frustrated with his brother, but he didn’t feel there was any major threat to the company since they’d had their best year yet and Titan took such a big hit recently. Abigail suggested focusing on pleasure instead of business, so Chad was more than willing to get frisky.

At the hospital on Tuesday’s Days show, Shawn Brady (Brandon Beemer) showed Chloe Lane (Nadia Bjorlin) the knife he found by the riverbank. He suspected this might be connected to Marlena Evans (Deidre Hall), but Chloe didn’t think so.

Chloe explained how Brady had no stab wounds despite being covered in O positive blood, which was Philip Kiriakis’ (Jay Kenneth Johnson) blood type. She also mentioned Philip’s earlier suspicion about ripping the tree out and admitted Brady’s blood alcohol level was over three times the legal limit.

Chloe then handed over Philip’s phone, which was found in Brady’s pocket. Shawn took a look and saw a series of threatening texts that were seemingly from Brady. The last one was the worst since Brady said if Philip didn’t cut himself out of Chloe’s life, then he’d have no choice but to cut Philip out himself.

Chloe decided to call Victor, who hadn’t seen Philip and warned that his son was dead to him after that stunt he pulled with Ava Vitali (Tamara Braun). Shawn eventually offered updates on some bad news. The trail of blood led to the water, so Shawn said they had to start looking at this as a possible homicide with Brady as the prime suspect.

Back at the pub, Rex assured Roman Brady (Josh Taylor) and Kate Roberts (Lauren Koslow) that he was happy over their reunion. When Sarah’s name came up, Rex admitted she dumped him at the last second before leaving town. He had no idea where Sarah was and hadn’t been able to get in touch.

Kate mentioned Xander moving on with Gwen – and soon after on Tuesday’s Days episode, Gwen appeared in the doorway looking horrified to see Rex. She managed to stop Xander from going in and suggested they should hit the bistro instead, so an oblivious Xander was glad to give his lady whatever she wanted.