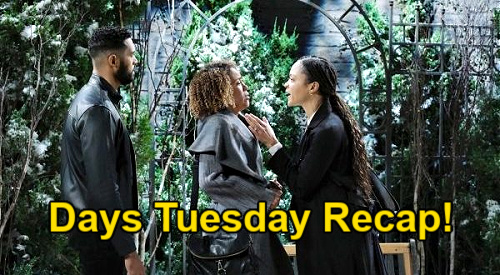 Nicole was upset because Eric Brady (Greg Vaughan) just told her that he was staying out of the country at the mission for three more months. Nicole said that she really needed Eric right now.

Rafe did his best to cheer Nicole up, even inviting her to breakfast at his home. There, Nicole said that she was starting to feel better, even though she didn’t have much of an appetite and that she wouldn’t feel much better until Eric came home.

Rafe gave Nicole the teddy bear that she won for him earlier in the week, and Nicole left feeling a bit better.

At the hospital, Gwen Rizczech (Emily O’Brien) fumed at Jack Deveraux (Matthew Ashford), saying that he turned his back on her when she was eight and made her who she is today.

Jack said he wouldn’t challenge the results, but he denied ever turning Gwen’s mother Tiffany Rizczech away back in the day.

Jack fumed that he couldn’t have warm, fuzzy feelings for Gwen given what she did to the family, and Gwen griped about how Jack’s family history was horrible and that she was just a chip off the old block.

Gwen said that she’d never throw her own child away, and Jack insisted that he never threw her away.

Jack said that Gwen had gotten her revenge, and he asked what she wanted now. “What do you think I want?” Gwen said. Jack whipped out a checkbook and asked how much it would take to make Gwen go away and leave his family alone.

At the Horton house, Laura Horton (Jaime Lyn Bauer) told Jennifer Deveraux (Cady McClain) and Abigail Deveraux (Marci Miller) that she needed to start from the beginning and that 25 years ago she and Jack returned from The Meadows and Jennifer and Jack were estranged.

Laura flashed back 25 years to that time, when she was at the Horton house urging Jennifer to give Jack another chance.

In the flashback, Tiffany came to the door and spoke with Laura. Tiffany said that she had gotten pregnant by Jack and had an 8-year-old daughter named Gwen. Tiffany had found out that Jack had money and wanted money for child support. Laura told Tiffany that she’d have Jack call her, and Tiffany left.

Laura then told Jennifer and Abigail that she hid the fact that Tiffany stopped by from both Jennifer and Jack so that it wouldn’t interfere in them getting back together. Laura flashed back to meeting Tiffany and paying her off without Jennifer and Jack being the wiser.

Laura said that she kept the checks going to Tiffany, who promptly cashed them until one day when she suddenly stopped. “A while later I found out that she died, and that’s all I know. I’m so sorry,” Laura sobbed.

In Chicago, Eli Grant (Lamon Archey) and Lani Price-Grant (Sal Stowers) surveilled a park from their hotel room waiting for Dr. Amanda Raynor (Victoria Platt) to show up for her supposed meeting with Xander Kiriakis (Paul Telfer). Soon, Dr. Raynor showed up and she quickly came face-to-face with Lani and Eli.

Dr. Raynor stammered that she didn’t know where the babies were, but that they were safe. “I didn’t want to do this!” Dr. Raynor insisted. “I had no choice – I was blackmailed,” Dr. Raynor explained.

Eli and Lani pressed Dr. Raynor for answers, and she eventually explained that she was living in New York and doing well when someone called her and used her past against her.

Dr. Raynor said that the person threatened to tell her employer about her switching Sarah Horton’s (Linsey Godfrey) and Kristen DiMera’s (Stacy Haiduk) babies if she didn’t cooperate and take Eli and Lani’s babies. Dr. Raynor told a startled Lani and Eli that this conversation happened around Thanksgiving.

Finally, at some undisclosed location, Ivan Marais (Ivan G’Vera) brought the twins into an apartment in a stroller. “Madame!” Ivan called out.

What a great episode of Days of Our Lives! You’ll want to be sure to tune in tomorrow for more of the action. Here at CDL, we’ll keep you up to speed on the hottest new Days of Our Lives spoilers and news.