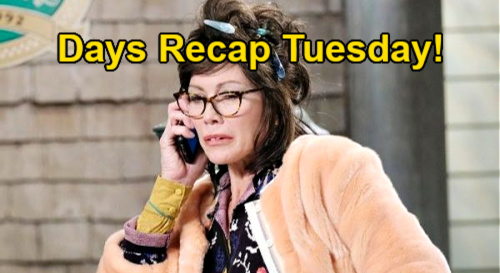 Chloe and Susan talked briefly, and Susan learned that Chloe was going to visit Brady Black (Eric Martsolf) in the hospital. Chloe took off, and Susan got a call from Kristen DiMera (Stacy Haiduk) asking her to come to Statesville Prison.

At the Kiriakis mansion, Xander Kiriakis (Paul Telfer) was furious that Victor Kiriakis (John Aniston) seemed to be giving Philip Kiriakis (Jay Kenneth Johnson) a pass on his entanglement with the mob.

Xander got even angrier when he learned that Victor didn’t accept Philip’s letter of resignation. Victor said that he wanted Xander and Philip to continue to be co-CEOs.

“Like hell we can!” Xander blustered, and he demanded that Victor promote him to sole CEO. Victor said that he had made his decision, and Xander ranted about how he switched babies for Victor and that he deserves more in return.

Xander told Victor that he quit, and that he’s out of the company. After Xander left, Victor figured that Philip was pleased, but Philip said he wasn’t.

At the DiMera mansion, Chad DiMera (Billy Flynn) talked with Abigail DiMera (Marci Miller). Together, Chad and Abigail rehashed what Gwen Rizczech (Emily O’Brien) had done and how Laura Horton (Jaime Lyn Bauer) had stolen a lot from Gwen.

Chad wondered if Abigail would move back into the mansion and work toward putting their marriage back together.

At the hospital, Sarah Horton (Linsey Godfrey) tended to Brady’s gunshot wound, noting that he needed someone to help him with his injuries going forward.

Just then, Chloe walked in with food from the Brady Pub for Brady, and she offered to check in on Brady a few times a day and help him as he recovered.

Brady said that wasn’t a great idea because of Kristen, but eventually Chloe persuaded Brady to let her tend to him. “It’s not like Kristen will know,” Brady said.

Meanwhile, over at Statesville Prison, Susan arrived to see Kristen, and she let it slip that she ran into Chloe earlier who was on her way to see Brady. That upset Kristen.

Kristen then asked Susan to help her walk out of prison without anyone knowing. “You want us to switch places?” Susan asked. “Only for a little while,” Kristen said.

Kristen tried to appeal to Susan’s attraction to Brady and to her loyalty to Marlena Evans (Deidre Hall) and John Black (Drake Hogestyn). Susan said that she’d think about it.

At the Salem Inn, Laura arrived to see Gwen. Laura said that she wanted to explain her actions and that she was truly sorry for what she had done. Gwen ranted that her mother was a drug addict who overdosed while she went into foster care.

Laura remained apologetic, and she explained to Gwen about how at the time she was trying to repair Jennifer Deveraux’s (Cady McClain) marriage to Jack Deveraux (Matthew Ashford).

Gwen learned about how Laura and Jack slept together back in the day, which Gwen found hilarious. Gwen rebuffed Laura’s attempt to try to help her repair things with the Deveraux family, saying that all the damage that Laura did couldn’t be undone.

Gwen then grabbed Laura’s arm, saying she wouldn’t let Laura get away with what she did.

A short time later, Gwen was sitting on the floor near the bed upset. Laura’s lifeless body was on the floor as blood was starting to pool near her head. Gwen looked like she didn’t know what to do.

Days of Our Lives is really heating up, so stay tuned to the NBC soap! You won’t want to miss any of the action this week. We’ll keep you updated on the latest Days of Our Lives spoilers, daily episode recaps, and news.