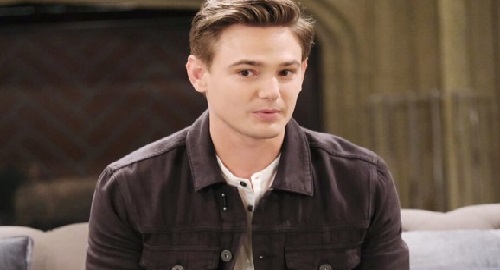 For starters, Chad will make a pitch to Johnny – one that could mean taking quite a risk. It sounds like Chad will go behind EJ DiMera’s (Dan Feurriegel) with a deal related to Johnny’s movie, so it’s safe to say Chad could provoke his brother’s wrath!

Nevertheless, Chad may offer an investment in exchange for a film role or something along those lines. During the week of October 11-15, Chad will play John Black (Drake Hogestyn) in a love story reenactment with Abigail DiMera’s (Marci Miller) version of Marlena Evans (Deidre Hall).

Tuesday’s episode could be what sets that in motion, but EJ will definitely have a few tricks up his sleeve! In the meantime, EJ will push Rafe Hernandez’s (Galen Gering) buttons at Julie’s Place. Rafe and Ava Vitali (Tamara Braun) just interrupted EJ’s date with Nicole Walker (Arianne Zucker), so things will get increasingly awkward the longer this interaction goes on.

Of course, Paulina might be messing with Chanel and could pull a “gotcha” where she insists it’s her favorite after all. Then again, maybe this is meant to highlight the fact that Chanel and Paulina don’t know each other all that well anymore.

Fortunately, Abe has both a key lime pie and a pecan pie on hand, so he’s covered no matter how this plays out. As for Chanel, she’ll leave the lovebirds to enjoy their dinner – and Abe will deliver his marriage proposal as planned. Days spoilers say Paulina will happily accept Abe’s offer to tie the knot, but her two secrets involving Lani’s parentage will continue to haunt her.

Meanwhile, Chanel will accidentally barge in on Eli and Lani’s steamy time together. They’ll be getting busy on the sofa at home when Chanel shows up – perhaps to chat about Abe’s marriage proposal plan moving full-speed ahead.

Days spoilers say Chanel will wind up embarrassed and apologetic, but hopefully Lani and Eli will get over the interruption quickly. They can always get the steaminess going again once Chanel departs!