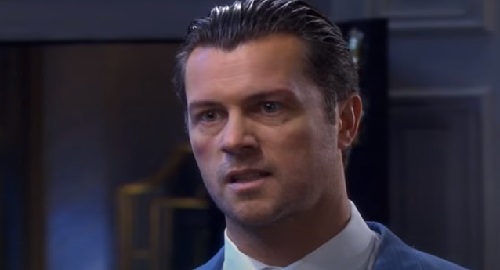 At Julie’s Place, Rafe Hernandez (Galen Gering) wasn’t pleased to learn Nicole was on a date with EJ. However, EJ pointed out he’d been married to Nicole twice and suggested the third time’s the charm.

Nicole urged EJ to hold his horses since marriage wasn’t on the table. Tonight was just about catching up. Rafe eventually made his way over to a table with Ava Vitali (Tamara Braun) and complained about Nicole falling for EJ’s act, but Ava convinced him to turn his attention back to their own date.

As for Nicole, she scolded EJ for pushing Rafe’s buttons and kept looking at Rafe across the room. EJ finally told Nicole to stop mooning over Rafe and thought maybe they should just have dinner back at his place. He assured Nicole their expensive bottle of wine wouldn’t go to waste and took it over to Rafe’s table with Ava as a “very lovely and expensive parting gift.”

After Nicole and EJ walked out, Ava started to pour a glass of wine. Rafe insisted it might be drugged and advised against it, but Ava clearly thought he was overreacting. Rafe kept ranting about EJ being a “damn phony” and made a comment about Nicole picking EJ out of all the guys she could’ve chosen to go out with.

Based on Ava’s expression, Rafe assumed she thought he was jealous over EJ and Nicole’s date. Since Rafe brought it up, Ava wondered if that was indeed true. Rafe denied being jealous and insisted he was just concerned about Nicole, but Ava felt like Nicole was a grown woman who was entitled to make her own decisions.

After Rafe apologized, he wanted to stop talking about both Nicole and EJ. Ava was all for that, but she refused to let Rafe throw such a fancy bottle of wine away. Rafe and Ava shared some flirty moments as they got their night together back on track.

At Paulina Price’s (Jackee Harry) place, she told Chanel Dupree (Raven Bowens) that she’d hated key lime pie since the day she was born. Paulina explained Florida lime pie was actually her favorite – and she didn’t like the backup option of pecan pie either. She suggested they could just skip dessert, but Chanel spoke with Abe privately and insisted she was going to make this Florida lime pie happen.

Once Lani Price-Grant (Sal Stowers) made it home, she got updates on Doug Williams (Bill Hayes) being committed to Bayview and then filled Eli Grant (Lamon Archey) in on her Paris conversation with Paulina. Eli was surprised to hear Tamara Price (Marilyn McCoo) shut the trip down because she didn’t want Paulina spoiling Lani. He couldn’t help but feel like Paulina wasn’t giving the whole story.

After things took a steamy turn on Tuesday’s Days episode, Eli took his shirt off as was preparing to make love with Lani when Chanel showed up at the door. Eli finally opened up and accepted the pecan pie Chanel offered.

Chanel admitted she needed their kitchen and worked fast on putting a Florida lime pie together. She wanted everything to be perfect for Abe’s proposal dinner, so Lani pointed out how far Chanel had come in her relationship with her mom.

While Chanel was waiting on the pie to cool, she talked to Lani about Paulina’s impending marriage to Abe. Since they were going to be stepsisters, Chanel and Lani admitted they’d always wanted a sister growing up. Lani promised to be the best sister Chanel never had, but Chanel argued that Lani already was one and rattled off some great reasons why.

The conversation shifted to the bakery and how much Chanel was enjoying working with Allie Horton (Lindsay Arnold). Chanel assured Eli and Lani that it wasn’t awkward, especially since she was “into men now.” She shocked Lani and Eli with the news that she was now seeing Allie’s twin brother, Johnny DiMera (Carson Boatman).

Back at Paulina’s place, she was ready to turn in for the night. Abe realized he couldn’t stall any longer and got down on one knee to propose. After Abe popped the question, Paulina hesitated on giving her answer briefly since she didn’t expect him to propose so soon. Nevertheless, Paulina eventually gave Abe an extremely enthusiastic yes and pulled him in for a warm embrace.

Chanel showed up with the pie too late to put the ring on top, but it didn’t matter once Paulina flashed her new bling. After Chanel squealed with delight, she hugged her mom and offered to let them celebrate privately. Abe and Paulina urged Chanel to stay for a glass of Champagne as well as some of the pie she just made, so they all dug in.

At Lani and Eli’s apartment, they ate the pecan pie Chanel brought over and ultimately got back to what they were doing before they were interrupted.

At the DiMera mansion, Abigail agreed to play Marlena Evans (Deidre Hall) in Johnny’s movie. Johnny hoped Chad was willing to come through on some funding, but Chad worried about provoking EJ’s wrath. Johnny insisted he wasn’t going to work at DiMera Enterprises no matter what, so Chad caved in and decided he’d fund the rest of the film.

When EJ walked in with Nicole, he saw Johnny excitedly hugging Chad and wondered what was going on. EJ found out that Chad agreed to provide the funding for Johnny’s movie and blew his top. Chad argued that EJ couldn’t tell him what to do with his money, but EJ insisted he could and was willing to take this outside.

Abigail warned EJ to back off before Nicole forced EJ to get some fresh air with her. Once they were outside, Nicole encouraged EJ to sit down and helped him see that he’d missed a lot while he was recovering. Chad was a grown man with a wife and kids. Johnny was growing up as well and wanted to be his own man, but EJ said he was just trying to be a father to his son again.

Nicole didn’t think the answer was trying to force Johnny to work at DiMera Enterprises. She thought Johnny had too much Sami Brady DiMera (Alison Sweeney) in him anyway. The mention of Sami’s name left EJ grimacing, so Nicole asked if Sami was what this was really about.

EJ didn’t see what Sami had to do with anything, but Nicole pointed out that Sami cheated with Lucas Horton (Bryan Dattilo). Nicole suggested EJ felt like he’d lost control of his life and was trying to regain that control by telling everyone else what to do. She argued that EJ was just going to push everyone away and urged EJ to back off a little bit so he wouldn’t end up alone.

EJ got a bit emotional and said he’d take Nicole’s advice into consideration. In return, EJ offered to make dinner for Nicole himself and mentioned that someone once told him he made a mean omelet. Nicole remembered telling EJ that and took the hand he extended as they shared a sweet moment.

Back with Johnny on Tuesday’s Days episode, he was relieved when Chad insisted nothing would make him back out of funding the movie. After Johnny left, Chad moved in close to Abigail and suggested cracking open a bottle of Champagne. He thought they could take the celebration upstairs, but Abigail wasn’t quite ready for that step – though she admitted she was tempted.

Abigail felt this was too important to rush, so Chad agreed. After Abigail kissed Chad on the cheek, she said she’d see him in the morning.