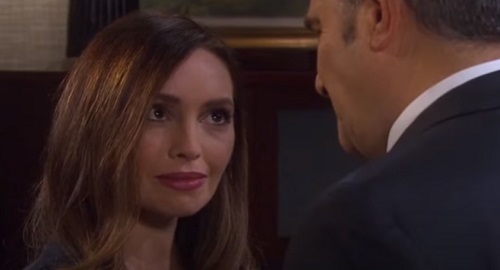 Days of Our Lives (DOOL) spoilers recap for Wednesday, October 6, reveals that Gwen Rizczech (Emily O’Brien) seduced the judge for an incriminating recording while Philip Kiriakis (Jay Kenneth Johnson) threatened to throw Jake DiMera (Brandon Barash) in prison for murder. Here’s how it all went down on Wednesday’s DOOL episode.

At the Hernandez house, Ava Vitali (Tamara Braun) called out that she was room service and barged her way in Jake and Gabi Hernandez DiMera’s (Camila Banus) room. Ava wondered what better way to start the day than a fresh-from-the-oven muffin. She offered Gabi and Jake a couple, so Gabi suspected maybe Ava had poisoned them.

Ava denied it and eventually left the room, but she paused outside the door to smile and suggested it could be Jake’s last home-cooked meal. Meanwhile, Gabi worried Ava might’ve installed a nanny cam to spy and refused to let Jake eat what could be a tainted muffin. She was convinced Ava was up to something and got annoyed with Jake when he took a muffin bite despite her warning.

Jake pretended his throat was closing up, so Gabi panicked and started to call 911 until Jake admitted he was messing with her. Gabi eventually made love to Jake and decided it was a pretty good morning despite Ava’s interruption.

At the Kiriakis mansion on Wednesday’s Days episode, Brady Black (Eric Martsolf) interrupted a romantic moment between Philip and Chloe Lane (Nadia Bjorlin). Brady offered up muffins and munched on one as he talked about being there to see the most beautiful woman in the world.

That annoyed Philip and Chloe, but Brady said he was a sucker for redheads before Maggie Kiriakis (Suzanne Rogers) appeared. Philip got a text from Ava and had to dash off, but Maggie took the opportunity to catch up with Chloe and Brady.

As awful as it was when Summer Townsend (Marie Wilson) died, Maggie felt at peace. She talked about scattering Summer’s ashes and was glad to know her daughter wasn’t in pain anymore. Maggie was also glad to be home and said she heard from Victor Kiriakis (John Aniston) that Brady was back together with Chloe.

Brady argued that was just what Victor wanted to happen, which confused Maggie since Victor hated Chloe. However, Brady explained that Victor thought he hit the bottom of the barrel with Kristen DiMera (Stacy Haiduk). Chloe added that Victor considered her the lesser of two evils.

In the park, Ava handed over damning info from Angelo Vitali (Angelo Tiffe) and insisted it was enough to put Jake away for a long time. There was even an eyewitness, but Philip pointed out Gabi would know Ava was involved if they brought in a mob informant.

Ava wasn’t concerned about the threat to her relationship with Rafe Hernandez (Galen Gering) since there was no proof, but she liked the idea of Gabi knowing she was the one to sink her. Later, Gabi met with Philip after being summoned. Philip announced that Gabi was fired and that she was going to sign Gabi Chic over to him – or else he’d send Jake to prison for murder.

Next on Wednesday’s Days episode, Kayla Johnson (Mary Beth Evans) talked to Tripp Johnson (Lucas Adams) about the new hospital initiative and wondered if he’d found a face for the campaign yet. Steve Johnson (Stephen Nichols) walked in and admitted he’d agreed to do it, but he balked at the idea of getting a flu shot.

Kayla practically forced Steve into it, so Steve did what he was told and became the campaign’s perfect fit. At the Salem PD, Xander Cook Kiriakis (Paul Telfer) told Justin Kiriakis (Wally Kurth) about the judge takedown plan, which Justin argued was illegal and stupid.

Xander insisted Gwen was on her way to tape the judge and added it already looked like Justin was involved to an outsider. Xander wondered what would happen if they said this was all Justin’s idea and pushed Justin to do this for Bonnie Lockhart’s (Judi Evans) sake. Although Justin the lawyer couldn’t help Bonnie, Justin the true Kiriakis could.

In Judge Smails’ (Richard Steinmetz) office, Gwen showed up and cried about how she’d do anything to help Xander. “I mean anything,” Gwen said seductively as she touched her blouse buttons. She assured Judge Smails that if the case was dismissed, she’d be happy to show him how grateful she was.

Gwen gushed about how she was very attracted to powerful men and played up her “assets.” She thought they could have a really good time together, but she needed to be clear. Gwen said she’d sleep with Judge Snails if he promised to let Xander go and called it a quid pro quo. She got Judge Snails to verbally agree and then took the recording to Justin, who took it back to the judge’s office.

Justin strongly suggested that Judge Smails dismiss Bonnie’s case as well as Xander’s. When Judge Smails asked why he’d do that, Justin played the incriminating recording Gwen made and left the judge looking pensive.