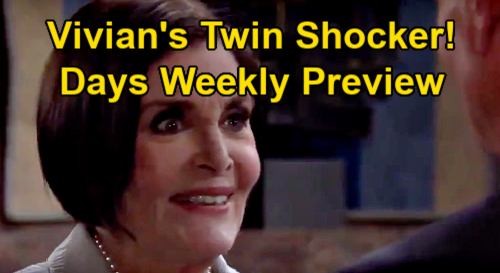 Days of Our Lives (DOOL) spoilers preview teases that the week of February 1 is going to be an exciting one in Salem. The new Days of Our Lives preview promo is out, and it foreshadows a lot of action on several storyline fronts. There’s a lot to unpack in this promo, so let’s get right to it.

First off, Laura Horton (Jaime Lyn Bauer) will be back in the action. As it will turn out, Laura will be the person who paid off Gwen Rizczech’s (Emily O’Brien) mom back in the day.

Laura will shock Jennifer Deveraux (Cady McClain) and Abigail DiMera (Marci Miller) when she reveals that she’s known about Gwen’s existence all along.

The preview shows Laura sitting down with Jennifer and Abigail saying, “I never thought I would tell you this,” then burying her head in her hands crying over what she’s done.

According to Days of Our Lives spoilers, Laura will think that she did the right thing for Jennifer and Jack Deveraux’s (Matthew Ashford) relationship, but now it will all come crashing down around her.

The promo also shows Gwen slapping Jack big time over at the hospital. Gwen will be upset over Jack’s reaction to the results of their DNA test, which Days of Our Lives spoilers say will show that Jack and Gwen are father and daughter.

Jack won’t really know what to do, but he will manage to offer to pay Gwen to go away, which should be what precipitates the slap.

Other Days of Our Lives spoilers say that Jack and Laura will have a big blowup of their own over Laura’s actions, so there should be plenty of drama to go around for the Deveraux/Horton clan.

Next, the promo shows a brief scene in which Philip Kiriakis (Jay Kenneth Johnson) and Chloe Lane (Nadia Bjorlin) kiss. Of course, this is what Philip has wanted all along, ever since Chloe came back to Salem. “Phloe” fans will be happy to see Chloe and Philip moving things along!

Over with Ciara Weston (Victoria Konefal), she’ll make a break for it from her captivity. As Days of Our Lives viewers know, Ciara is being held against her will by Vincent Bellman’s (Michael Teh) henchman named Rhodes (Jason Downs).

It looks like Ciara might somehow lure Rhodes into her room, where she’ll conk him over the head with a tray. Go, Ciara!

Meanwhile, back in Salem, Susan Banks (Stacy Haiduk) will get involved in the Ciara drama when she tells Ben Weston (Robert Scott Wilson) that Ciara is alive.

Of course, Susan will do this in a very “Susan” way, so it will be pretty over-the-top. The promo shows Ben just kind of staring at Susan as she gushes about Ciara being alive.

Of course, Days of Our Lives viewers know that Ben has already had the feeling that Ciara is alive before, but Susan’s premonition might just put him over the edge and get him to go looking for Ciara again.

The promo shows a first look of Linda Dano’s iteration of Vivian Alamain, as she walks with the twins in a stroller and says hello to the babies.

As it will turn out, Vivian will want to get a big do-over when it comes to the twins, and her kidnapping of the babies will be more about getting another go at being a mom to twins than about revenge.

It will be pretty warped, and it’s sounding more and more like perhaps Vivian has lost it. As viewers will remember, Stefan DiMera’s (Brandon Barash) death hit Vivian hard, and there may be some real instability there.

It appears that Jake will come over wanting to discuss Gabi’s business proposal for GabiChic, but he’ll be distracted when Gabi answers the door wearing only a towel, freshly out of the shower.

‘What are you doing here?” Gabi asks. “I just came to talk about your naked…your proposal,” Jake stammers back.

There’s clearly still a spark between Jake and Gabi, and something tells us that Gabi will try to exploit that as she attempts to get Jake away from Kate DiMera (Lauren Koslow). Let the fireworks begin!

It’s going to be an exciting week on the NBC soap, so stay tuned! We’ll give you updates throughout the weekend as more DOOL news comes in. Here at CDL, we’re your go-to source for the latest Days of Our Lives spoilers, daily episode recaps, and news.