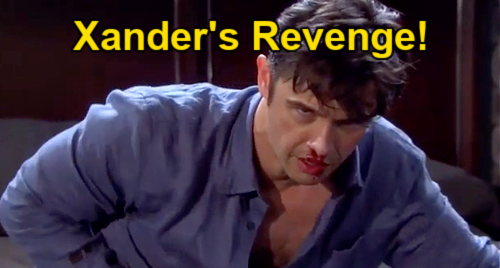 Days of Our Lives (DOOL) spoilers tease that Xander Cook Kiriakis (Paul Telfer) is out for revenge and may threaten to send EJ DiMera (Dan Feurriegel) to jail. Will some Sami Brady DiMera (Alison Sweeney) kidnapping evidence change everything?

DOOL fans know Sami was snatched, so that mystery will have to unravel. The show has implied that EJ might be the kidnapping culprit – and that idea seems to be gaining more traction now that Chad DiMera (Billy Flynn) has grown suspicious.

Chad doubted EJ’s story about not knowing where Sami is, so Days is heavily hinting at EJ’s guilt.

Of course, this goes against what the show usually does in terms of complicated mysteries, but it might be nice to have a simple one for a change. If EJ indeed abducted Sami, could it be Xander who figures it out and proves it?

Xander was furious over that brawl in his hotel room, which left him bloody and humiliated on the floor.

In what universe does Days think it’s realistic for EJ to win a physical fight against Xander?! It seemed ridiculous, so it’s no wonder Xander was so fired up about getting the last laugh.

We have no doubt that Xander will do exactly what he promised and gain the upper hand. It’s just a matter of finding some leverage and using it against EJ.

Those deals with Sami are part of what started this mess, so it’d be fitting for Xander to remain tangled up in Sami’s drama.

Plus, it’d be a fun twist for Xander to go from plotting to kill Sami to being the one who saves her – or at least the person who realizes she needs saving!

Xander will surely do some digging as he works to bring EJ down, so he could spy and hopefully follow a trail that leads to Sami in captivity. It’d be great if Xander could wiggle out of his own legal issues again and try to send EJ to prison instead.

Regardless, Xander will plot payback and could use a crime to use against EJ. Sami’s kidnapping would fit the bill, so we’ll provide updates as other Days news rolls in.

Days of Our Lives spoilers say Xander could solve the Sami snatching mystery, so don’t miss what’s in store.

CDL’s where you want to be for fantastic Days of Our Lives spoilers, news and updates, so make us your one-stop DOOL source.