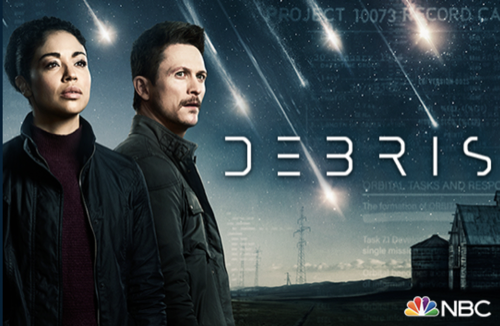 Tonight on NBC their new Sci-Fi drama Debris airs with an all-new Monday, March 1, 2021, episode and we have your Debris recap below. On tonight’s Debris Season 1, episode 1 called, “Pilot”,  as per the NBC synopsis, “Two agents from two different continents and two different mindsets must work together to investigate when wreckage from a destroyed alien spacecraft has mysterious effects on humankind.”

In tonight’s Debris premiere three years ago images were captured of a wrecked alien spacecraft moving through our solar system and for the past six months, debris from that spacecraft has been falling to earth.

A man is in a room when Anson and another man come to the door, he tells them they are early. They give Bryan cash and in return, he gives them something that is in a case, he tells them it will help them get through customs. Then Bryan gives them another thing, it was found on a roof in Wisconsin. If they bring him more money, the second one is theirs. Federal agents arrive, the man ditches the second piece in a vase., then he jumps to his death. A cleaning lady later finds the piece, then we see her fall through the floor onto another.

Finola is on the scene, along with Bryan; they see the one piece of debris that the cleaning lady found. They extract it safely. Finola pulls a video of the three men, she shows it to Bryan but he doesn’t recognize any of them.

Bryan calls Craig and tells him what happened, he says they couldn’t be working for the Russians or the Chinese. He asks about Finola, Bryan says she is settling in but he doesn’t know if she has the stomach for it.

We see a young boy in the car with his mother, she is driving. She tells her about these men in the circus who walk on tight ropes. She says it is dangerous and you have to practice your whole life to do it. All of a sudden, she starts coughing and blood starts coming out of her eyes, she stops the car. The boy is in the back, he opens his door and gets out to go in the front and check on his mom, he sees she is not moving. He pulls her out of the car and she starts to float away on her back.

Finola is talking about the victim who fell through the floor, they have declared her death accidental, the family has been notified. Finola and Bryan are on a plane, she thinks what they are doing could change the course of humanity. Bryan says it could also end humanity.

She says her dad was the first astrophysicist who was told the truth about what they found and we saw all the photos of the wrecked spacecraft, when those pieces started to arrive, he said that it finally made him believe again. She finds that comforting not scary.

Amy, the woman who was driving her son in the car, is hooked to a fence. Bryan and Finola are there. Finola notices that the wind is not blowing in the direction that Amy is moving. Bryan unhooks her and Amy’s body just keeps levitating and moving away from them. They follow her and find other bodies, also levitating in the middle of a field.

The bodies are all in a warehouse, two of them were reported missing in the first week, no mutual friends and they don’t work together. But, they all lived in Wichita. Then, we see Amy open her eyes.

Finola tells Bryan that Kieran was cremated. Ilsa is home. Finola is back at the crater-sized object looking around. She starts to think back to her mother.

Isla tells Bryan that a few days ago, her mom and dad told her she had to come home they wanted to show her something. Then, before she did, she received a text that told her not to come. Bryan asks her why she was at a boarding school so close to home. She says that after her mother died, she fought a lot with her mom, even after therapy, so she decided to leave.

Finola thinks it is Mrs. Vanderburgh’s grief that caused her son to manifest. She probably thought it was a miracle when she saw her son alive, so she called her daughter to come. Then 24 hours later she tells her not to come, so something happened. Bryan gets a call, the “dead” bodies are all chanting a name, Finola’s mother’s name. Finola is freaking out, how can they know her mother’s name. Bryan gets a text message, another woman missing, she was with a little boy who matches Kieren’s description.

Anson is at the site of the crater and when the cops see him, he and another man put something in their mouths and vanish, then reappear under an overpass. Anson then hears someone calling for help, he shoots. Bryan and Finola are on the scene, they see a body that is halfway stuck in a cement pole. It is the man who was in the hotel room in the beginning with Anson.

Finola and Bryan think that Kieran is taking the woman on the same route as he went on the night he died. They race to the gas station before the crash site and Bryan finds the woman in the store. Finola sees Kieran in the car, she speaks to him, he says he is Kieran and she tells him he is not.

He says he is wanted there. All of a sudden, the woman inside the store falls on the ground, there is blood in her eyes. Then we see Finola, she has her hand on Kieran’s hand. Bryan gets Isla, she wants her to talk to her mom’s body and reach her so they can stop this, Finola’s life depends on it. Isla does it, she brings her mom and back and everyone else, including Finola who tells Bryan that it was tarrying.

Bryan is keeping secrets from Finola, her father is back in the country under an alias and Crag tells him not to say anything to her.