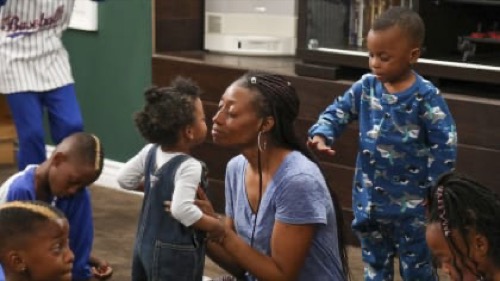 Dallas and Denver get busted for twinning. Deon suspects Karen might be pregnant, but his excitement is quickly thwarted by an unexpected killjoy.”

In tonight’s Doubling Down With the Derricos episode, the twins Dior and Diez have been separated. They do everything together and they even go to doctors’ appointments together. But this time Dior was left home as his parents went with Diez to his appointment. They found out something concerning.

They found there was something wrong with Diez’s head shape. It could constrict the brain and so the family was told about specialists at UCLA as well as possible surgeries only they didn’t want to borrow trouble. They’ll find out what they need to do once they meet the specialist. The parents brought their son back home and his twin ran to greet him. Dior had been anxious about Diez. He had been waiting at the door for him to arrive and just having him back seems to have eased the tension.

The parents didn’t tell the other kids about what happened. They didn’t want to worry anyone and so they took them out to have ice cream. The family was having ice cream when Karen mentioned she felt nauseous. She has been feeling nauseous for the last couple of days. Deon suspects it could be pregnancy and he just didn’t say anything at first because they were still comprehending what happened with Diez. Deon and Karen later broke the news to GG.

They told her about what the doctor told them and the doctor feels sure that Diez will need surgery. It turns out his condition could be found in multiples. Only no one told his parents this. They were just finding out about it after how many children they had and they could be in this situation again if Karen really is pregnant.

The family was known for getting pregnant with multiples. There were twins, triplets, and quintuplets. The children had even got into trouble for twinning. Twinning is when they put their twin before their other siblings and the parents didn’t like that because they didn’t like their children cutting themselves off from the other children. Twinning in this case was not winning. Deon and Karen told their kids to cut it out.

They also waited until they all went to bed before they started telling GG everything. GG had an anxiety attack when she heard Diez might have surgery. Her son had to help calm her down and she wasn’t feeling like herself again until they prayed. They prayed for strength. They prayed for the best possible outcome for Diez. And they did their best to make sure the kids didn’t suspect anything.

Only the kids did suspect something. They suspected their mother cranky and why she was short-tempered. They also suspected the reason she didn’t jump in to do double dutch is that she’s pregnant again. Karen’s eldest daughter was the first to bring it up in a video she posted. Deon was the first to bring it up to Karen. Karen doesn’t think she’s pregnant. She said she’s been at the rodeo before and that she would know if she was pregnant again but the signs are all there.

Karen was just ignoring those signs as she spotted everything else. Karen noticed that her sons Dallas and Denver were twinning again. They put their twins before their other siblings and that was wrong because the other siblings felt ignored. And so Deon came up with the perfect way to teach his sons to share with more than just their twin.

Deon baked a pie. He baked one of his delicious sweet potato pies and the twins couldn’t partake. They had to watch everyone who was willing to share eat some of the pie and the only pie they’ll get to have is humble pie. Deon was making pie while the only thing Karen wanted to eat were pickles. She was just eating a plateful of pickles. Deon told her that she has to do a test now because there’s no way she’s pregnant and so he let it slip to his mother about what he suspects and she wasn’t happy.

GG wants to know where the line is. She thought they would stop having kids after they reached a certain number yet they have more than ten children now and they could be having more if Karen turns out to be pregnant. Karen hasn’t carried a single baby in the womb in several years. She’s just been having back-to-back multiples.

She could be pregnant with multiples. GG was not happy and she finally asked her son what will be his limit. GG was old. She felt tapped out and so her son wasn’t happy because he thought his mother would be happier about a new baby. The two of them went back and forth until GG said she couldn’t be happy about a new baby. Deon was having kids because he has a need he doesn’t know how to vocalize and so GG told him that might never be filled.

He might have this need for the rest of his life. When was it going to be enough? He had more than ten children and they were going to need more help the more kids they brought into this and so it wasn’t fair to rely so heavily on others. They shouldn’t have more kids than they can handle. Deon hadn’t wanted to hear that and it’s why he got mad at his mother.

Deon later picked up a pregnancy test. He believes it will be positive because he knows the signs and he had been right. The test told them they were pregnant with their fifteenth child. Unless it’s multiples again because that number will go up.