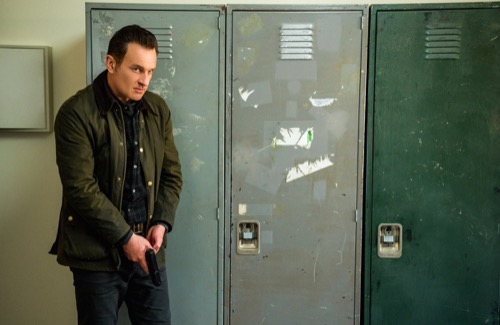 Tonight on CBS FBI Most Wanted airs with an all-new Tuesday, April 6, 2021 season 2 episode 10, “Spiderwebs,” and we have your FBI Most Wanted recap below. In tonight’s FBI season 2 episode 10 as per the CBS synopsis, “After Crosby’s old army buddy is attacked in an apparent drug deal gone wrong, the team’s quest for answers uncovers a dangerous web of conspiracy. Also, Jess questions his relationship with Sarah after an unexpected encounter.

In tonight’s FBI Most Wanted episode, a correction officer began taking hostages. He had heard the feds were coming to visit one of their prisons to carry out a cell phone check and he grew worried because he wasn’t just any prison guard. He was a dirty prison guard. He was working with the prisoners to funnel drugs as well as contraband into the prison.

He thought one of the prisoners might talk and so he confronted them, but they thought he was the bigger risk and a mere argument turned into a physical altercation. Brendan DeRossi beat his friends within an inch of their lives. He then stabbed them and made it appear as if they killed each other. And he didn’t stop there because he also started to take hostages out of the staff.

All this came about because of a cell phone check. The two federal agents that came to check illegal cell phone usage within the prison were LaCroix and Crosby. There were there because Crosby’s friend had been attacked at the park. His friend Matthew Turner served with him in Afghanistan and Crosby was really close with the family however Matthew was jumped at a park in the middle of the night and it wasn’t a robbery either.

He still had both his cell phone and his wallet on him when he was found. Turner had been talking with someone from the prison mere moments before he was attacked. LaCroix and Crosby were merely checking on a lead when they kicked off everything and found themselves in a lockdown at Carson Correctional.

In other words, no one had been looking for dirty correctional officers. DeRossi would have been safe if he had just kept calm and not overreacted. He killed two members of a violent Filipino gang. He also killed his hostage which was a staffer at the prison. She had access to the armory and that’s what he wanted from her. He killed her once he got the weapons he wanted. DeRossi has proven to be a violent man and he was on the run. He ran off in all the confusion.

The FBI was now tracking him and the first person they contacted was his ex-wife. She was still bitter about the divorce. It hadn’t been her idea. It was his and the ex-wife suspected he left her for another woman. And so LaCroix’s began looking for this other woman.

They checked DeRossi’s bank accounts. They found he was being paid drug money and they suspected it was connected to Crosby’s friend Turner. Only Gibson went through Turner’s phone. He wasn’t connected to drugs, but he was connected to an underage girl and it’s clear someone was blackmailing him over it.

The girl couldn’t be more than sixteen. She was from a high school in New Jersey and it appeared the same Filipino gang connected to the prison had found out about Turner’s association with this girl. The gang was called the Lontocs. The Lontocs had used the image of a high schooler named Michelle to lure Turner in. He had been on a dating website in spite of being married to someone else and the Lontocs sent Turner some nudes of this girl.

It was all a con. People are also too ashamed of themselves to report it and so that’s how the Lontocs have been getting away with it. Somehow DeRossi had gotten caught with this gang. He helped behind bars and he ticked off some dangerous people by killing two of their own. They were now looking for him. DeRossi’s girlfriend Kellie couldn’t even help him. She worked with the gang and they chose them over him. She helped them find him.

She thought he would be killed and he wasn’t. Kellie set him up twice, but each time he was able to fight his way out of it and then he realized it must have been her that gave away his location. He went looking for her and he wasn’t the only one. The FBI was also looking for her. They realized Kellie was connected to the Lontocs through their fake program called East2West Teachers.

They brought women from foreign countries into the United States with the promise of a job as a teacher. This turned out to be a scam and the girls/women would incur debts they would have to pay back one way or another. Kellie was one of those women. She was chosen personally by the boss of the Lontocs and so she was his girlfriend while pretending to be DeRossi’s girlfriend. She had been used to turn DeRossi.

He was willing to do anything to keep her and so he started working for a gang just to keep his mistress. The feds found out about this. They connected the fake program, the prostitution, and the many cons to Stanley Vidorgiza. He was the head of the snake. He was the person DeRossi blamed the most for his life spinning out of control and so he killed Kellie, plus her mom, and he went after Stanley.

Stanley was housed in a church. It’s where they kept the women and Stanley ran his business out of the joint. The feds came busting it while DeRossi had his gun trained on Stanley. Stanley’s men began firing at people and the feds were firing back and DeRossi was going to use the confusion to escape again, but Crosby stopped him. And the FBI was later able to rescue the girls being held captive.

After all, was said and done, Crosby’s friend asked him not to say anything to his wife. Turner felt guilty enough and he didn’t want to tell his wife because he didn’t think she could forgive him for being on that dating website.

And LaCroix also received some unexpected news. The woman he was interested in had ditched her husband and she was getting a divorce. She also still wants to see how things will work with LaCroix and so that gives him hope for the future.