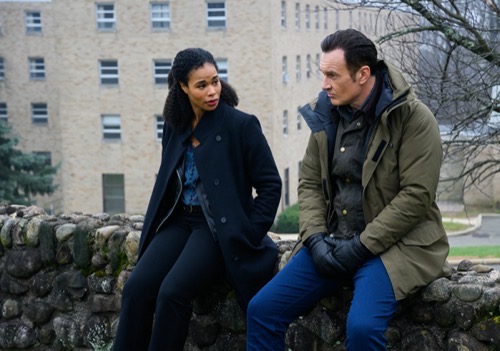 Tonight on CBS FBI Moste Wanted airs with an all-new Tuesday, January 19, 2021, season 2 episode 4, “Anonymous” and we have your FBI Most Wanted recap below. In tonight’s FBI season 2 episode 4 as per the CBS synopsis, “The team searches for a young woman who is heading down a deadly path of vengeance, using ties to an online radical conspiracy organization to further her cause; Barnes must make a life-changing decision.”

A woman opened fire on an Narcotics Anonymous meeting. She killed three people because she said no one could help her and she wasn’t smart about it. She left her fingerprints all over the scene. She was identified as Eva Martin. Martin seemed to be targeted a couple in the program. She was after Sal and Lucy Little. The two have been married for over a decade and they owned and operated a bakery called “Little Bakes and Treats”. The couple were harmless. They were pillars of the community and the third person who died had tried to get between them and Eva. She was set on killing the Littles. The question now is why. Why did she want to kill the Littles? The FBI had to solve this question if they meant to catch her.

LaCroix and his team were given this case. They were down one person because Clinton was given a temporary reassignment and so he was off doing that while the team went to Eva’s childhood home. They met her parents. It was easy to see why she went off the rails like she did because she had an overbearing father. He put too much pressure on her to succeed and he washed his hands of her the moment she failed.

She burnt out of law school. Her parents still keep a shrine to her past achievements and they were also raising her son. They got custody of him after Eva’s drug addiction became a problem. She turned to drugs to deal with letting her parents down and she didn’t want to give it up. Not for anyone.

Her parents tried. She ignored them and the father of her son was too busy in his own drug addiction to be much help. She didn’t even fight for her son. Drugs were just too important to her at the time and so the first NA meeting she went to – she shot up. Again, the question was why. The team investigated the Littles and it seems they were dealing with conspiracy theorists. Their bakery was put on the dark web as a front for baby-selling. People would call them or come into the bakery trying to buy children and Eva wrote about them on the dark web. She wrote that she was going to put an end to the children’s suffering by killing their oppressors and the truth she simply killed two good people who were helping out their fellow drug addicts.

The couple had nothing to do with the buying or selling of children. It was all the fantasy of a conspiracy theorist who wrote about it and published it as if it was the truth. The internet wasn’t regulated. There were a whole slew of people who could write about whatever they wanted and human-trafficking was one of them. Eva fell in with these people. She became convinced that all the pedophiles they talked about needed to be killed and she started first with the Littles.

The team thought she would hit Peter Hunter. He was running for city council and conspiracy theorists thought he was also a pedophile. LaCroix and his team went to his meeting with the public and they stopped someone from shooting him, but it wasn’t Eva.

Eva was off killing someone else. She was killing a woman named Bethany and Bethany seems to have been an old friends of hers. Eva killed her former friend because she said her friend betrayed her. Her friend had kept quiet as Eva had been abused and Eva hadn’t been able to let it go. She killed her friend and she went back to hunting people. Her friend who was arrested at the city council meeting hadn’t known where she went. Dennis said that Eva reached out to him and his organization Z-All. She killed the Littles as an audition to join the group. She even had Dennis agree to hand over his bomb and so now she has a bomb on her. She didn’t use this bomb to kill her friend where she again left her fingerprints. She killed Bethany with a knife and then she carved the word “liar” into Bethany’s back.

Eva wasn’t killing people because she was a domestic terrorist. She was killing people that had something to do with her rape. It turns out Eva was raped at college and she informed the school about it, but they did nothing. They buried what happened and Eva dropped out of school rather than sit in the same classroom as her rapist everyday. Her friend Bethany also did betray her. Bethany was being paid fifty thousand dollars every month for the last eight years and so she was being paid to keep quiet as her friend fell apart. This is why Eva killed her. Eva was now going after her rapist and that’s why she needed the bomb. LaCroix and his team figured it all out the moment they went digging into Eva’s time at the college.

They even found the rapist’s name in spite of the college record of the rape allegation being redacted. His name is Yates Warren and his father has been paying off people to make sure Yates was never punished for what he did. The team warned Yates that he was in danger. They put a car on his home and he hadn’t liked that. He didn’t like it was drawing attention from the neighbors. He also informed them that he was going on vacation soon with his friends. He claimed he was going to the Bahamas and the truth he was going to Arcadia Oakes. Arcadia Oakes is a camping trip for rich white men. It was more glamping than camping and the men made sure they were being waited on by pretty women. One of those women was Liz.

Liz was knocked out and robbed. Her uniform, her car, and her identity was stolen by Eva. Eva went to Arcadia Oakes. She went with her bomb and she had just finished shooting Yates’s father when the team arrived. Sheryll spoke with Eva directly. She told Eva that she believed her and that the others because guys like Yates don’t stop at one. She also told Eva that killing Yates means he gets off. If he lives, he would have to face accusations from other women. He would lose his reputation and no one would ever trust him ever again. And so hearing that, Eva chose to let him live.

Eva gave herself up. She was arrested and her case as well as why she did it would now be out there. Sheryll’s speech to Eva also helped herself. She had been scared before about having another baby and now she realizes that she does want the big family. She might not always be there to protect her, but she was going to try.