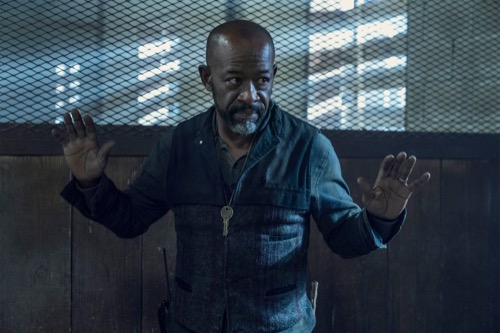 On AMC tonight Fear The Walking Dead (FTWD) airs with an all-new Sunday, May 9, 2021, episode and we have your Fear The Walking Dead Recap below! On tonight’s FTWD season 6 episode 12 called, “In Dreams,” as per the AMC synopsis, “Grace wakes up with a case of amnesia and sees what has become of her friends after she has been gone for years, and she struggles to put the puzzle pieces together on what has transpired.”

In tonight’s FTWD episode, the episode begins with Grace, she is lying down in the forest and when she awakens she looks up at the trees and a walker jumps on top of her. Just in time, Athena arrives and kills the walker, and saves Grace in the nick of time. More walkers are coming and Athena’s fighting style is kind of like Morgan’s style. Athena says her dad showed her how to fight.

She tells Grace that there is a clinic where she lives, a doctor can check her out. Athena brings Athena to the damn, she says she is sixteen and has lived there all her life. Grace says it’s impossible, they just got there. A man answers the door, it is a much older and grey-haired Morgan, she called him after his name and asks her if they have met before. Morgan tells Athena and Grace to get inside. It looks like Grace is dreaming of the future, and Athena is actually Morgan and Grace’s daughter.

Inside the damn, Grace tells Morgan it looks like everything that he wanted it to be. Grace takes him by the shoulders and tells him she is Grace. He remembers the name, but he doesn’t remember her. She says if it is not her, how would she know that they rode on the carousel. Morgan says this is impossible, she can’t be here, he buried her himself. Morgan brings her to her grave, he says she died in labor and the radiation made her sicker than they thought. He tells her that Athena is her daughter, they already met.

Grace asks if she is ok, he says yes. She says she thinks they should hold off on telling Athena until they know more. Morgan introduces Dr. Dorie to her, she says it doesn’t look like she has a concussion. Charlie is June’s apprentice, Daniel is cutting hair, Victor is in the barber chair and they are actually friends. Dwight comes up, he has two kids with Sherry, he says he got lucky.

Grace asks about Alicia, she is running a place of her own, she fixed up the burned-out stadium that she lived at with her mom. Luciana and West went with her. Al left a while ago, she said she was chasing a story, but think she was chasing somebody. Grace said she didn’t think this place was going to work. He says they were struggling, they didn’t know who was doing the graffiti, but when she had Athena, they put their differences aside and rallied together.

Morgan is out walking with Athena and Grace, this new world has the most beautiful trees fully bloomed with dark pink leaves. Morgan hears something, then they see an abandoned car and on it is spray painted, “The End.” It almost appears like Grace is dreaming. Grace whispers to Morgan ask him where he is. We can hear Morgan says come back. Athena is with Grace, she tells her that they have to keep moving.

Grace takes Athena’s recorder, she hears Morgan held up in the vet, he calls June and tells her that they are caught up there and Grace is unconscious, he needs her to tell him what to do, she is in labor. June says she is on the way, she will come on a horse. All of a sudden, Morgan says they found them and there are gunshots.

Grace demands that Athena take her to the vet or she will break her recorder. As they are getting closer, Grace can hear Morgan’s voice. They run into Riley and his group on the way. Riley stands over Grace with a knife and tells her that he has something she wants, she gets a hold of the knife and stabs him in the neck, kills him.

Meanwhile, Athena is having pain in her stomach, Grace tells her they are contractions, she is feeling her contractions. Grace says she was wrong, they are real and they are connected. Grace tells Athena that she is her mother and she has to wake up so she can be born. The two continue walking to the vet. All of a sudden, a white horse appears, the two get on together.

Grace starts talking about Athena’s biological dad, Mathew. He was kind and handsome and smart, a big Roy Orbison fan. They worked at a power plant together, and he got exposed to radiation and very sick.

Back to the vet, Morgan keeps telling Grace to wake up. Grace and Athena are in the vet, Grace tells her this may be the only time she has with her, as she comes to terms with the fact that she might not survive giving birth. She tells Athena that she was also exposed to the radiation and she doesn’t think that she will get a chance to get to know her. But, now she knows she is going to be strong without her.

Grace and Athena look towards the door and Riley and his men are zombified and they go for the kill. Meanwhile, Morgan is really killing Riley and his men in real-time while Grace is laying on the ground. Riley tells Morgan he can’t stop them, but Morgan has stabbed him in the chest and tells him that he just did.

Grace dies in front of Athena, while Riley zombie comes after Athena. Morgan calls June and tells her Grace is not breathing while Riley tells Athena they are both dead.

Morgan is doing chest compressions on Grace, he tells her not to give up on her. Morgan comes to the vet, the older version, he kills Riley the zombie and Grace wakes up, he tells her they don’t have much time. Grace says she doesn’t want to say goodbye but she has to. She goes over to Morgan and hugs him. Grace tells Athena to let go. Grace walks into the light.

Meanwhile, Morgan is with Grace, she wakes up, he tells her that he lost her. She says she had to come back, she tells him it is a girl and her name is Athena and she doesn’t think she is going to survive, she saw it, the future, their future. She tells him that everything is going to be ok.

Morgan gets some water for Grace while she prepares a song list for Athena on her recorder. Morgan asks her about the dream, she says it was a near-death experience, but it seemed real. All of a sudden, Riley comes driving right through the door and says he is there to get what he wants, the key around Morgan’s neck. Morgan asks him what it is for, Riley says it doesn’t matter. Grace tells him that the key is not the future, Athena is. She says Riley has already lost, he just doesn’t know it yet. Morgan takes the key off his neck and gives it to Riley, he tells them good luck and he leaves.

Grace tells him that Athena is going to bring everyone together and give them something to fight for, she knows it. Grace is in labor, Morgan is passing a cloth over her head. Grace turns on her recorder and listens to Roy Orbinson. Grace’s baby is born, Morgan delivered her, but she is not crying. Morgan tries to get her to cry, but she is stillborn. Grace wasn’t seeing her own final moments, she was seeing Athena’s final moments. Grace says she thought it was going to be different but it was just a dream.